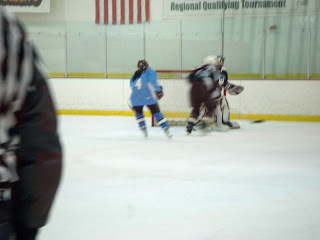 Apparently it's doppelganger week on Facebook, which means you are suppose to change your profile picture to a celebrity that people say you look like for the week. What a weird coincidence since I encountered my Canadian hockey twin last weekend at the Las Vegas women's tournament. Her team, the Thunder Bay Hawks, played an L.A. team, Bad Kitty, in the championship for their division. It started with people saying we skated alike. We were watching the final and someone noticed it, then as other friends of ours came over we pointed it out, and they'd say, "Oh yeah, I noticed her before because she looks so much like Kristina." Creepy. 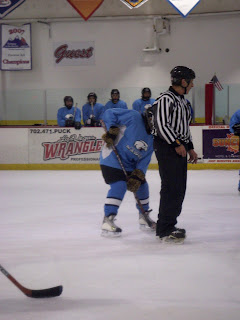 She also has long dark hair, and even more trippy, SHE HAS MY SKATES! I noticed that one. Number one, she has Grafs, which a lot of people who skate at the Toyota Center wear because the pro shop there loves them but they're not the most common skates. Number two, they are the same color scheme, silver and white. Most Grafs I see are black. SO WEIRD! And her team was baby blue, like my team!

I went down to the glass to try to take a good picture of her, to document our alikeness, and I could not get a good picture of her! Coincidence? She did skate by me, and I smiled at her and she smiled back. It made me feel all funny inside. I have a twin! Her name is Karen Hill and apparently she lives in Ontario, so if anyone wants to help me stalk her, let me know.

The real news of the tournament is that WE WON OUR DIVISION!!! The other news is that I hurt my knee. I think it is a ligament pull or sprain, but I got an MRI today to rule out a tear. A tear would be bad, 3-6 months recovery. It happened last Saturday, and it still hurts really bad. I keep waking up from the pain, even when I ice it. If I sit for more than 15 minutes it starts to throb. I've been told that it's good that I'm in pain because it's more likely a sprain, to which I'm thinking, "Okay, I really don't want it to be a tear but THIS PAIN IS NOT GOOD!" It really wears on you to be in continuous pain for 6 days straight with nothing but ice, ibuprofen, and sushi to make it better. Pain makes me crabby. It's hard to be my normal cheery self right now, despite our win, and my super-awesome fun birthday last Thursday (I am now 38 and 1 week old!), and we're going to the Olympics in Vancouver!!! How crazy is that?!? I bought the plane tickets last night (and located my passport finally). We have tickets to see the men's hockey teams from Russia (ooo, Ovechkin), Latvia (hey, they have 2 NHL players, a Star and a Flyer), and best of all in my opinion, Slovakia, who has one of my favorites, Miroslav Satan. Oh, and Michal Handzus from the Kings. And Chara, Hossa, Demitra, Gaborik, Visnovsky...not a bad team all around. But SATAN. He plays for the Boston Bruins with Zdeno Chara now. They played the Kings a couple of weeks ago, and I was a little starstruck.

I know what you're thinking- "What, Kristina, you're not going to be supporting women's hockey? What gives?" You'll be glad to know I got tickets for the Canadian women's team vs Sweden. Whoo hoo! This is extra exciting because I took a clinic with Maria Rooth and Katarina Timglas who are both on the Swedish team. How cool is that!?! The tickets also happened to be way cheaper than the men's and we are sitting in the fifth row. 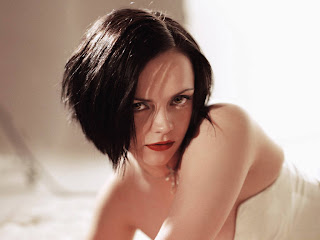 Back to doppelgangers- my celebrity one is Christina Ricci. I've been compared to her since the Addams family movies. I have a two (or three?) degrees of separation thing going with her- a guy I went to business school with is married to her sister. Also, Christina Ricci is the spokesperson for RAINN (the rape, abuse, and incest national network) which I raised money for in Blogathon 2009. Can't wait for Blogathon 2010. I thought blogging every day of December 2009 went well as well, although I got a little burned out, hence the long break from blogging. 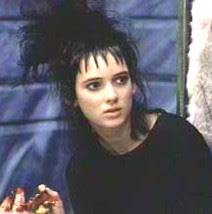 My former celebrity doppelganger was Winona Rider in Beetlejuice. Hmmm, Addams Family and Beetlejuice both have a goth-looking girl with dark hair. I see a theme here. (I am NOT writing the name of the movie a third time, although I am strange and unusual.)

Okay, back to organizing my Vegas hockey tournament/birthday pictures. I took about 500 of them. It's taking a while to sort through them. I want to share them all!
Posted by Tealrat at 8:03 PM

Did you see Alice in Wonderland? I thought it was very odd. I am dressing up as Alice for Comic Con and Halloween this year. :)

I live in Thunder Bay and I am pretty sure I know where she Lives, Works, Eats and Plays .... I love stalking People, this could be fun to work in a team! lemme know what kind of awesome info you want on this Pretty Lady, and I will try and help! I really like her skates too! they go so fasssst.

Bummer, her team isn't coming to Vegas this year otherwise I could stalk her later this week! You should totally have her contact me. I wanna meet my doppelganger!