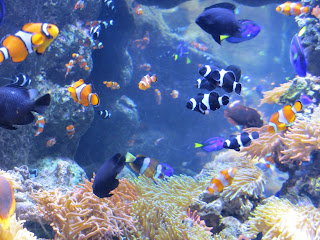 Last Monday I went to the Aquarium of the Pacific with my work team for our holiday party and I fell in love with stingrays. There was a stingray petting area, and some of them would come up to the edge and stick their heads out of the water so you could pet them, almost like dogs. It was amazing! I never thought of underwater creatures as having personalities, but the fact that some of them seems so interested in us, and others didn't seem to care made them seem like an animal you could have an interaction with. That is one of the traits I always thought made rats so special- they all have such distinct personalities. I've had rats that wanted all my attention, rats that were too cool for all that, rats that were independent and adventurous, rats that just want to chill out, nervous rats, brave rats, insecure rats, and confident rats. They have all been different. The aquarium even had a shark petting area. Same thing- some of the sharks ignored us and some kept circling back near the edge and coming up close to the surface. The "petting" sharks were only about two feet long, compared to the much larger sharks they had in other areas of the aquarium. In case you are wondering, the sharks had rough skin, and the stingrays were kind of slimy. 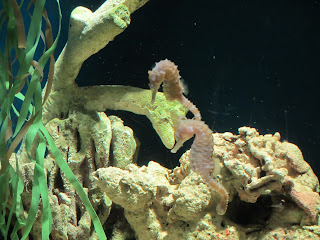 We also fed a baby sea otter named Ollie, watched seals perform, saw tanks of fish so colorful they didn't seem real, watched scuba divers feed fish and rays, and saw lots of other animals like seahorses and jellyfish. The whole experience made me feel like a kid again. I was running around talking to the animals and almost falling into the petting tanks because I wanted to get as close as possible to them. It reminded me of why animals have meant so much to me since I was old enough to crawl after our family dog, why living with my rat friends is so important to me, and why I keep trying to be vegan, recycle, and "be green". Loving animals is something I've valued my whole life, something I consider part of who I am.

Speaking of the rats, my rat family has grown again. I got "the Littles", three brothers, almost two years ago from a woman who rescues pet rats, "the Biggles", two brothers, earlier this year from a friend who had rescued them from a firehouse and being feed to a snake, and a couple weeks ago I took two sisters from a friend who didn't think her daughters were paying enough attention to them. I have gone from get rats from a rescue person to being a rescuer myself. They are all sweet and wonderful and a lot of work since I now have three cages to clean (taking 45 to 60 minutes a piece). They are worth it though. Being at home without their company would be sad. As a side note, my friends who know I'm a rat lady are sharing this article with me about how rats are compassionate enough to choose freeing a friend over eating chocolate. In case you need some convincing that rats really are sweet.

I'm still struggling with sleep, even with my little friends comforting me. This week I've slept on the couch every night because when I think about going to my bed I get terrified. I take sleeping pills, but just the time until I fall asleep has been hard to tolerate. Recently my boyfriend was at my apartment over the weekend, and I started talking to him about how scared I was to go to bed. Soon I was talking in an even younger voice than I normally do, saying, "I was so small and scared my dad was coming in my room." I started crying and even hyperventilating. It was kind of like a flashback, like I was reaching into where that fear lives in my brain and embodying it. I was totally feeling all the fear that creeps into me when I think about going to bed. During the week I try to acknowledge those feelings but not let them overwhelm me so I won't be able to get to sleep at all. Even with sleeping pills, if I let all of it come out I lose touch with the present and it takes a long time to come back and calm down enough to sleep. This was the weekend and I didn't have to wake up at any certain time so I could just let it all come out. Also my boyfriend was there which made me feel protected enough to leave the present and just go with it. Most nights I try to keep a balance between letting some of these feelings run through my conscious brain and drowning in them. It is like letting the water out of giant tank. I've been shoving the fear into it for so long that trying to let it all out at once would be too overwhelming and could take over my life, so I'm trying to let it out slowly, a little bit each night. Eventually I will get through it. Eventually my little self will not be separated from my big self by this gulf of trauma, and I will be whole.
Posted by Tealrat at 2:32 PM No comments: