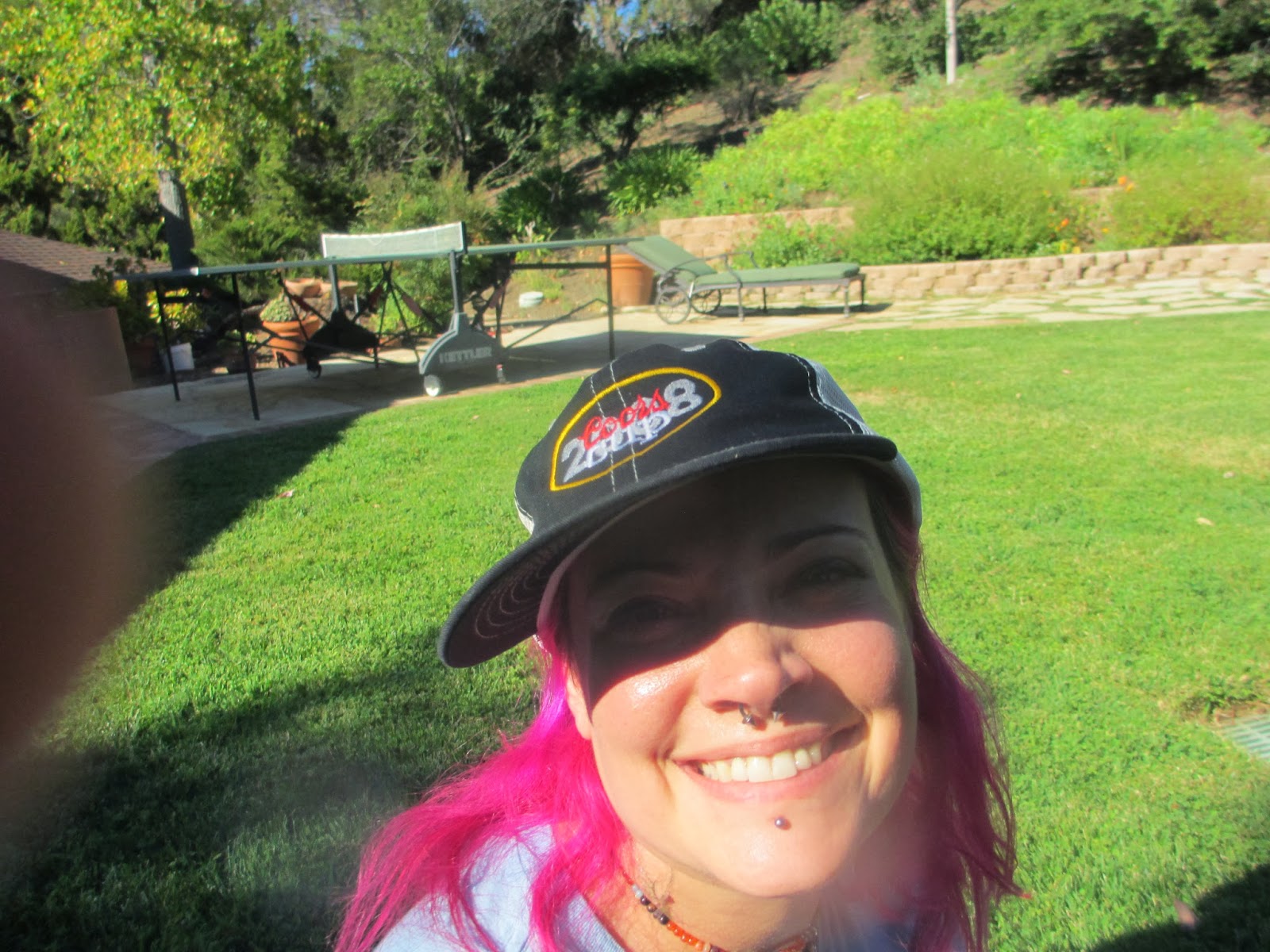 In the little over a year that I went to ASCA (Adult Survivors of Child Abuse) meetings every week, the biggest thing that struck me was how similar I was to the other people in the group. I had no idea how much of my life had been impacted by the way I grew up. There were so many things about my personality, my way of dealing with people, work, conflict and stress, and the patterns in my life that were eerily similar to these people who I didn't necessarily have a lot of other things in common with besides that we were abused as children. One of the things that kept coming up was that women who had been sexually abused had problems with food. We either had a hard time eating or ate too much for reasons besides hunger. Some women, like me, fluctuated between the two. The ASCA meetings were the first time in my life I ever talked about being bulimic. It was amazing since I've been talking openly about a lot of things for the last eight years that I never talked about before. I've just had a lot of practice keeping things hidden, even from myself, and I still moderate how much I share, even subconsciously. It wasn't like I just flipped a switch and a completely dark room became illuminated. It's more like I lit a torch in a forest with a lot of winding paths going in many directions, and I've been exploring them ever since. One reason I didn't deal with my issues with eating was that it wasn't a priority at the time. I had a lot more pressing things to deal with. But when I heard other people talking about it in relation to being abused as a child, it felt safe for me to talk about it. Outside of the ASCA group, talking about having an eating disorder felt like I was bringing up yet another unrelated problem out of nowhere, but in the group, it fit naturally into the other symptoms and outgrowths of the abuse.

It started with my parents telling me that they fed me and put a roof over my head, so what more did I want from them? It was the alternate reality that was drummed into me from childhood- this is all normal, you deserve to be threatened, yelled at, and hit; this is your fault; we are good parents. Part of the rituals of "we are a good family" is that we ate dinner together every night and everyone was expected to play the parts of normal family members. When I got to middle and high school, this charade became more and more intolerable. It was torturous to look my parents in the face, let alone talk to them about mundane things as if I wasn't going to be fighting for my life a couple hours later. I tried bringing books to the kitchen table, since they were my escape. That got me in a lot of trouble. I hid in baggy clothing. I slouched down in my chair. Then I started refusing to eat in front of them. It was a hunger strike. They couldn't make me eat, and they couldn't say they were feeding me if I wasn't eating. They couldn't have their precious normal dinners if I wasn't eating. It made sense from a physical standpoint as well. I was trying to disappear in clothes and under black hair and make-up. The thinner I was the more I wasn't there. During soccer season, I had practice after school and came home after dinner anyways. I went straight to my room without eating. In the off-season, I came home from school when no one else was home. My brother was still at school, my dad was at work, and my mom had started going to school. That was when I started bingeing on pasta and bread. I was so hungry, and I felt relaxed after I ate. I liked eating in secret. It felt like I had something my parents couldn't control. All the sharp edges and emptiness of the day was gone when my stomach was full. I was satisfied. My weight fluctuated wildly between soccer season and the off-season, but I was the only one who knew because my clothes were so loose.

When I started drinking I discovered throwing-up. It was like smoking because at first it felt awful, and then it felt good. I felt purified after I threw-up. Not only did it get all the alcohol and anything churning in my stomach out, but also it felt like all the black feelings in my body came out, like an exorcism. I had a rush of warmth to my head and felt light and floaty. For a couple seconds, I was free from the confusion and anger and self-hatred and feeling like I had so much pain inside me I couldn't keep it all down and it would come flying out of me, cracking my skull open and bursting my heart and guts into a bloody mess. Throwing up sounds like a gross way to deal with bad feelings, but considering that some of the other options I saw around me were heroin addiction and suicide, it seemed pretty mild. Eating disorders can have a lot of different reasons and messing with your food is always available. It's easier to do than getting drugs and usually less addictive, and less final than suicide. I thought it was a lot less dangerous than other options, although I've realized that's not always true. There are very serious and life-threatening immediate and long-term dangers to eating disorders that can hit at any time or wear away at you over time. In our diet-heavy culture, we consider anyone the slightest bit over "normal" weight unhealthy, and assume anyone who is skinny is healthy (we even call it "healthy" weight). We are largely unaware of how unhealthy it is to deprive your body of the nutrients it needs, which compounds over time. In treatment, I met teenagers with the beginnings of osteoporosis because their bodies were so desperate for calcium that it was being leached out of their bones. When you're not eating enough to fuel the basic functioning of your body, your body eats away at itself. Starvation is not healthy. I myself have erosive esophagitis, which can be reversed, but if it isn't, it could lead to cancer.

Sexual abused really complicates your relationship with your body. At the time, I disassociated so I could mentally and emotionally get through what was happening to me physically. That agony, I don't know how else to describe it, had nowhere to go and lived buried in my body and my subconscious. It causes discord inside me, and the more its confined in my body the more I blame my body for the pain I'm still in. I wonder if there's something about my body that makes abuse happen to me, and I want to change that part of myself. I want to get far away from the body that experienced the abuse, either by changing myself physically, disconnecting from my body, punishing my body, or some combination of those. At the same time, my body is mine, one of the few areas I do have some control. So much of abuse was to have control taken away from me, to take my body from me, to treat me like a doll with a consciousness trapped inside. The abuse completely messed up my ability to develop into an adult who felt agency over my body and my life. I grew up not feeling in control of my body, and not even feeling like I was in my body a lot of the time, which didn't make me feel like I had control. To heal, you really have to go the opposite way, and connect with yourself, but that's a long process. I'm a lot more aware of myself than I used to be, and more connected to my body.

I used to disassociate with just about any stress, which meant my body went numb, my mind went blank, and my feelings disappeared. It was frustrating because situations that I could potentially handle I wasn't able to because my survival response had took over and I wasn't emotionally there  to respond. But I'm still very blunted, so that I'm doing a lot of emotional work to put together what's going on with myself. I have instincts, but I really have to tease out my own feelings, and even things that are going on in my body. The thing is, emotions aren't just in the mind. They are so much a physical experience, and I really struggle to feel present in my own body. It sounds strange, even to myself that I don't feel in my body. I do feel my body, but it gets away from me, and especially the physical manifestations of feelings don't seem to make it to my brain. My consciousness is chronically under-informed. The eating disorder was actually an imperfect way to get some control of the situation and my body. It was the shortcut and what I could manage with my body at the time. It is also still easy for me to get back to that place, even now. PTSD keeps those defense mechanisms close by. When I felt physically threatened with the rape talk at work, the terror over my body put me back there. You can't work on healing when you don't feel safe. I was desperate to find some safety and nothing felt safe. The eating disorder gave me a little bit of a safe feeling. Without real, dependable safety, the eating disorder still has a purpose.

Your best writing to date. ~~A