A waltz with discomfort 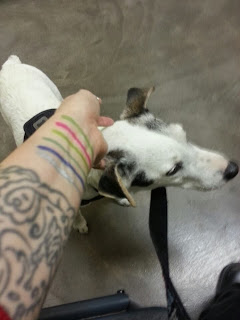 This last year was all about dealing with my health. I had a whole range- the more conventional and sudden (having my appendix removed in September), a resurgence of an old problem (bulimia, with more than three months of near full-time treatment), external (gaining a lot of weight), internal (bacterial overgrowth in my lower intestine), hormonal (started having my period every two weeks in October, which remains a mystery), and pharmaceutical (stopped taking all my medications in July and went through a very nasty withdrawal period from one which I would never take again, went back on two, added two more). Primarily I'm just dealing with the constant in my life for as long as I can remember, my companion, my curse, my friend, my foe, the terms and conditions of my life, my PTSD. It has been my biggest struggle over this last year, and the year before. It was something that I kept compartmentalized and separate, as much as I could and as much as I imagined I could, from the rest of my life. Now the goal is to live with it, be integrated, fit the pieces of myself together and present a united front. Not that I'm at that point. I've really been shell-shocked since I stopped working.  Of course, shell-shocked is just another term for PTSD, so how do you stop being shell-shocked about the fact that you're in a lifelong state of shell shock? I know that in some cases PTSD can be overcome, but I went through trauma so early in my life, for such a sustained period, and reinforced by multiple major events. It will be with me for life and the best I can do is work to lessen and manage the symptoms. I'm not being negative. I just know my illness by now.

My therapist once said that she didn't "think of me as mentally ill" because anyone that grew up the way I did would have PTSD. I thought that was strange, first because she's a therapist and I would think a therapist would consider PTSD just as much a mental illness as any other mental illness. Besides, what difference does it make that the conditions were so extreme that there was no chance of me surviving without developing PTSD? Does that mean that someone who theoretically "could" have survived without developing a mental illness is "more" mentally ill than someone who had no chance? It plays right into the derogatory belief that people with mental illnesses are weak and if they were stronger they would be able to overcome or avoid getting ill altogether. This is a widespread, ridiculous idea that makes it that much harder to live with a mental illness.

Imagine the pressure you'd feel if you had an illness that permeates every aspect of your life, where you go through periods where you isolate yourself from other people because you are so sick even though that's the time you need people the most. You find it hard make and/or maintain relationships because your health is so up and down. You go through periods where you are close to death but to people who don't understand what it's like to be suicidal it's "all in your head". You work twice as hard to maintain a career or get through school and need to take breaks, even start over, repeatedly, and find the motivation to pick yourself up again and again. You have doctors and medication, but dosages are always being adjusted and medications just stop working, or the side effects get too disruptive to live with. You try other drugs but every change comes the risk of taking a nosedive or having truly terrible side effects instead of merely onerous ones. The medicines don't cure you anyway. Hopefully they alleviate crippling depression or anxiety so you can function without interfering with your personality to the point where you don't know who you are anymore. Besides the side effects, there are usually other medical problems, like digestive difficulties, sleep issues, hormone imbalances, thyroid issues, and back problems. All the while you're trying to maintain as much of a normal exterior as possible because in most workplaces and social circles, no matter how open-minded, people knowing you have a mental illness is going to hurt your social standing and credibility. So you put a lot, a lot, of energy and effort into managing your anxiety and fighting off depression and stabilizing your emotions. It's exhausting. I do it every day just to get through.

But if I was stronger, I'd be able to just stop being ill. If there was any chance I could do that, since I'm pretty smart and driven, I'd be putting all that effort and more into being free from this huge stone around my neck. The reality is that people who live with mental illnesses are some of the strongest people out there. It is a constant struggle that most people have no idea is going on. What is really weak is when just hearing about mental illness is intolerably uncomfortable, making the effort to be open-minded and consider the experience of someone different from you is too hard, and having compassion and empathy rather than judgment and distain is too much effort. Maybe they genuinely believe in a tough love approach. "If you are socially isolated and treated like a freak for decades, you will suddenly have an epiphany into how you can be magically cured of your moral failings as a person!" Or maybe they really believe it's contagious and they might get the "crazies" if they don't distance themselves.

I read about the Lines Project online, which is the picture above. For a week in December, you draw 6 lines with a Sharpie on your left wrist if you self-harm and/or are depressed, and on your right wrist to show support. I participated, and I think it is a really brilliant idea because of how invisible people's suffering usually is. Suicide and self-harm is especially hard for people who haven't experienced it to understand, and is often seen as something you are choosing to do rather than a symptom of an illness. I have no desire to go back in the closet with my mental illness or my, gasp, loose talk about things we don't acknowledge lest someone think we brought it on ourselves, so I don't care about drawing bright lines on my wrist and posting pictures. If you look closely you can still see the lines I put on my wrists permanently. For me, they will always be there, whether other people can see them or not.
Posted by Tealrat at 8:08 PM

Hey. I've been reading your blogs for a while. I'm impressed by your resilience. As a fellow sufferer of C-PTSD, I know how debilitating it is. And how mysterious. Some days we are fine and function like normal people. Then, out of the blue, we are on another plane of existence entirely. Like we can see the physical plane, but float above it, unable to really *feel* it.

Thank you for your blog. I relate to so much of hat you have written. It makes me feel less crazy when I hear my experience through your words.

I am sorry you have had such a shitty year. I miss you.

Hi, thanks for the comments and sorry I didn't respond sooner. I am trying to get myself back into blogging. I miss it and need it, but it's rough. I have a Facebook group that I'll keep updated- It's called "Lightning Rod Woman- blog". It's a closed group, but you just need to request to be added. ~Kristina