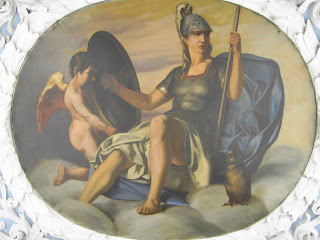 "Violence shall synchronize your movements like a tune..."
-W.H. Auden

Dear readers, I am exhausted. Emotionally, physically, mentally. I sleep, but I'm still tired. About 3 weeks ago, I had a dream. I was in my dad's truck with him and my brother. My mom was absent. We were in a synthesis of Clarkston, WA (where my great-uncle lives) and Wenatchee (where one of my audit clients was). My dad was driving. I was trying to get him to stop for the night, instead of driving all night to Seattle. I was giving him directions to the street with all the hotels. He was angry, refusing to respond to me, and driving fast and erratically. He took a turn so sharply that the truck skidded out and rolled over.

Since it was a dream, the truck popped back up, but I refused to get back in. I told my dad I wasn't going to let him put me in danger anymore. He motioned to my brother to get back in the truck, but Jeff walked over and said he wanted to go with me. Dad walked away. Then Jeff said he had to go back to get his stuff out of the truck. As he left, I wanted to grab him and tell him, no, no you can't go back. We need to get away from here. I knew I couldn't stop him, though, and I knew he wasn't coming back.

I woke up angry. Really, really angry. Angry with my dad, but even more angry that my brother is dead. It's not fair, and it will never seem fair to me. He shouldn't have died. I've been reading about the developmental damage, both psychological and emotional, that abusive parents inflict on their children, and I'm feeling more outraged at what happened to us. I consider this progress, and my books agree. It means I'm holding the perpetrators responsible instead of blaming myself. Not that I'm all better, though. My psychologist and I were going to start working on my flashbacks from Jeff's suicide, but I've been having these violent spasms of guilt that I've had to deal with first. I'm hoping I'm almost done- I dealt with a lot of it when I was in the Survivors of Suicide group therapy. Maybe the guilt was like a wounded animal that attacked me one last time before it died.

The strength of my guilty feelings makes sense psychologically, not logically. When you are a kid, you idolize your parents. It is a matter of survival to defer to them, as your whole world depends on your parents. If they do bad things to you, you're not psychologically able, as a child, to understand that your parents are the ones being bad. The only way you can understand it is to think that you are bad and deserve mistreatment. By the time you get old enough to rebel against them, the damage is already done. Self-hatred and guilt doesn't magically go away the second you turn 18, or 16, or 21.

When I was a kid, my value to my dad was as his punching bag, and to my great-uncle, I was a sex toy. But to my brother, I was a protector, a caregiver, and a role model. My relationship with Jeff made me feel needed, appreciated, and loved. It made the abuse easier to bear as well. As long as I took the brunt of our dad's violence, Jeff didn't. I told myself I could endure it to protect him. I didn't kill myself, and I did think about it a lot, because I couldn't abandon him. I even fantasized about killing our dad, but would never do it because if I was in prison I couldn't be there for my brother. With so much of my self-worth and identity wrapped up in protecting Jeff, it's no wonder I blamed myself for his suicide and have been punishing myself ever since.

I realize now that I didn't have the power to protect Jeff from our dad, that he abused Jeff as well. Even though I never saw my dad hit him, I did witness his verbally and emotionally attacks my brother. Until recently, I thought abuse just meant beatings, and didn't recognize the magnitude of the damage our dad did to Jeff and me in the way he belittled and threatened us. He didn't need to beat my brother- the whole family saw what he did to me and that was enough to keep them in fear and obedient. I don't remember ever throwing a temper tantrum, and don't remember Jeff doing it either. We knew the price we'd pay if we ever asserted ourselves. I got smacked around for looking at dad "funny" (as he defined it), crying when our dog died, walking past him when he was angry. That's not a healthy way to grow up, in fear for your life, and your sister's life for that matter. Long-term, we were unable to develop the independent identity and self-confidence that good parents support instead of undermining. When your sister is your main emotional caregiver because your mom is locked in her room all the time, you don't exactly feel safe and secure, I imagine.

And the cruelest twist of all is traumatic bonding. You spend you childhood trying to make the abuser happy, trying to anticipate his moods and violence, trying to comply with the impossible demands and rules, trying to win his love and approval because children need love and approval from their parents, no matter how horrible they are. You don't even understand that this is abnormal. You don't know that families aren't supposed to be like this. When the abuser shows any kindness at all, even if it's just a day without violence, when he says something nice to you, when he pays attention to you and he's not angry, you feel incredibly grateful. You think you must have done something right. That little morsel, no matter how pathetic and insufficient it is, keeps you hooked, and you redouble your efforts to win his approval and love. It keeps hope alive, hope that is unjustified and cruel.

It's sad when you realize that adults that were abused as children are often more loyal, more dedicated, and much more desperate for their parents' approval, especially the abusive one, than adults from healthy families. Adults from "normal" families usually have a strong enough sense of self that they have moved on from needing their parents' approval, even if they still want it. Not getting that support in childhood leaves you with an unfulfilled need that you often don't know how to satisfy as an adult, especially in a way that will bolster your self-esteem instead of making it worse. (I.e. people often times get into alcohol or drugs, destructive relationships, or become workaholics to try to fill that void or numb the pain. Or they just kill themselves.)

Giving up that fantasy, the one hope that got you through your childhood, that your family will become loving and supportive if you just try hard enough, despite all evidence to the contrary, is REALLY HARD. Self-blame is awful, but sometimes it seems better than facing the truth- my parents don't love me. (We can quibble about whether they love me but do it badly, or don't at all, but regardless the result is that I didn't get the comfort and nurturing I needed as a child, or an adult.) My brother is dead. Even though he meant everything to me, I didn't have the power to save him. My brother and I were outmatched by adults who used us selfishly instead of caring for us. Now I have to figure out how to take those steps to finally grow up emotionally knowing that I will never, ever, get my parents' approval no matter what I do. They still hold me responsible for the abuse, and there's nothing I can do about it. This is a fight I can never win, even though it's been ripping my life apart for almost 35 years.

The only way to win is to stop playing, and even though I haven't spoken to either of my parents for almost a year, I still struggle to let go of the belief that I can make them change, make them see what they've done to me and Jeff. I let go of the self-hatred and blame and it transforms into despair- incredibly strong, almost overpowering feelings of betrayal, anger, rejection, and abandonment. I struggle through the stages of grief as I recognize the loss of my childhood and the death of my fantasy of parents who will give me what I need from them. I want so little, but it’s still too much. You can live with guilt and self-hatred indefinitely, your whole life even, while you wait for acknowledgement that never comes. If you let yourself grieve, though, it is difficult and painful, but it does pass, and you move forward.

The idea of forgiveness often makes it's way into these discussions, that is, just let go of the anger, forgive them, and be at peace. Unfortunately, it doesn't work that way. You don't get to circumvent the emotional work by just deciding to forgive and forget. Because you can't forget, and as long as you still blame yourself and avoid placing responsibility with the abuser, the expectation that you should just be able to forgive and get on with it is just another way that you beat up on yourself. You feel bad because you're still angry, and you've failed to forgive. If someone hasn't taken responsibility for what they've done, and you're still suffering for what they did to you and they don't have to live with the consequences, why should they get your forgiveness, after everything they’ve already taken from you? They don't deserve it. The only forgiveness that really helps you heal is to forgive yourself, and possibly forgiveness that is freely chosen for your benefit only, after you've done the emotional work and let yourself get angry and outraged and held the perpetrator responsible. As long as you still blame yourself, trying to force yourself to forgive is self-destructive. The books support me on this one, too. I haven’t read a single book or talked to single therapist who says forgiveness is necessary, or solves anything.

It's hard for me to write about feeling angry and sorry for myself. I've never got sympathy that way- growing up it was dangerous to express my very-justified anger to my family, and those outside the family were generally uncomfortable with it. Victims should be self-effacing, forgiving, and above it all, somehow un-phased yet more wise and insightful about those things we don't like to talk about. Not that I think you, dear reader, can't handle the reality. The reality being that I have to experience all this rage to get through it. I have to let myself feel years of repressed anger before I can move on to my post-abuse life, no longer at the mercy of others. I'm sure you would have stopped reading by now if it bothered you. It's not pretty, but this is what it's like. It's hard work, and it's worth it. I'm worth it. At least that's what my daily affirmations tell me.
Posted by Tealrat at 3:00 PM