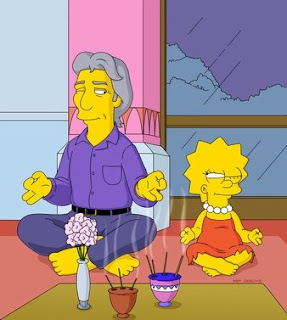 Picture is the promo card for "She of Little Faith", the 6th episode from The Simpsons' 13th season. It first aired on December 16, 2001. (See here for details.)

I'm off work for the Christmas holiday and I've been watching a lot of The Simpsons on DVD while I unpack. After 7 months, I finally got my own place and my possessions out of storage. It is a huge relief to have my life back, and my apartment is beautiful. It has new hardwood floors, a balcony, and is the perfect size for me and my stuff. I finally have my bed, my desk, and most importantly, my own space. I also have internet hooked up, but not TV, which is why I'm watching DVDs.

Watching The Simpsons is comforting to me because my brother was a huge Simpsons fan, and the show reminds me of his sense of humor, how we bonded over Simpsons quotes, and happy times with him. This time of year is always hard for me. Holidays in general are difficult because I miss him and they bring up painful family memories, but as New Years Eve, Jeff's birthday, approaches, my regret, anger, and sadness intensifies. Every year since he died is a year of life he missed out on.

He died in 1997 after season 8 ended (amazing that the show is still going, and the movie came out this year), and I am the proud owner of seasons 1 through 8, complete with deleted scenes, storyboards and other animation extras, and, best of all, commentary. Truly I am a geek, because I love listening to Matt Groening, the directors, animators, writers, Yeardley Smith (the voice of Lisa Simpson, Jeff's favorite character) and other actors and guest voices talk about the episodes. The writers especially remind me of my brother. I can picture Jeff getting along very well with them, and geeking out with them for hours. He would have turned 30 in a week.

I have also been reading The Verbally Abusive Relationship by Patricia Evans (1992, 1996, Adams Media). It has been helpful in making sense of abusive behavior, much like Why Does He Do That? by Lundy Bancroft (2002, Berkley). Abuse is very confusing, because the person doing it says they love you and care for you, but they do things that hurt you tear down your self-esteem and confidence. There is also a lot of conditioning involved, so as you get used to it and come to accept behavior that is not acceptable, the abuse gets worse. I often think of a line from the movie The Opposite of Sex (1998), "you're primed for shit." As the book says, people with good self-esteem will reject abusive behavior out of hand, but those of us conditioned by abuse tend to blame ourselves, try to find ways to fix the situation, make excuses for the person, and become very frustrated when, despite all our efforts to make the person happy and avoid doing anything that might offend them, the angry outbursts, insults, yelling, and disrespect continues. Actually, it gets worse. Abusive people are unpredictable, contradictory, and irrational, while holding themselves out to be more rational and deserving of respect than you are. The book is very hopeful, though, because with self-awareness you can learn to stop blaming yourself and feeling like you need to defend yourself rather than walking away from that kind of treatment. Of course there is no legitimate excuse for abusing someone, and the responsibility is with the person doing it.

Thirdly, I have been doing yoga. I have yoga DVDs with Ana Brett and Ravi Singh that are helping me increase my navel power and clear my chakras. I really love yoga, and exercise generally, because I have "body issues" and exercise and especially yoga help me feel connected to my body, grounded, and self-accepting. I have been seeing a therapist for a couple months, and she encourages me to do things that are healing, like yoga and writing. If I say I have to work on myself, she disagrees. She says I'm giving myself the time I need to heal, not "working". She says self-worth is better than self-esteem, because self-esteem is more variable and influenced by how others treat us, but the ultimate goal is self-acceptance. My yoga DVDs are very into self-acceptance. For me, self-acceptable means feeling whole and connected with myself. Similarly to how energy flows between my chakras and they are balanced with each other, my mind, body, emotions, past, present, future and every other part of me is balanced and connected. I imagine feeling pride in who I am and my uniqueness, not awkward and alone.

Tomorrow is Christmas, and between now and my birthday in January, I review the previous year and prepare for the next. I need 4 weeks rather than just New Years Day. I like my therapist's philosophy- I don't have to work at it, just let myself heal. I feel less pressure, less urgency. I don't have anything to prove. I just need to let myself heal.
Posted by Tealrat at 7:37 PM