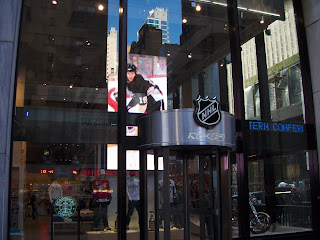 I think I may have cursed myself with my prayer to the "Great Travel Goddess". I did get everywhere I was trying to go, and I did get a Chicago snow globe, but that was about all that went right. On the way to New York, I was sitting next to a guy with stunningly bad gas. I spent most of the flight with my face buried in the sleeve of my sweatshirt.


The first thing I noticed coming into NY was that it was Fleet Week, which made me laugh. I remember watching David Letterman in high school when his audience was full of sailors, and there was a Fleet Week episode of Sex in the City. The hotel that I stay at is in midtown right next to Times Square, which just adds to the surreal feeling that I'm on the set of a television show. (This is sort of ironic, I suppose, since I don’t feel like I’m on a movie set when I’m in L.A.)

I got to the hotel after 10 pm, which was when they stopped doing room service. The woman at the front desk assured me that the Irish pub next door was still serving food and it was "really good for pub food" so I dropped off my luggage in my art deco room (black and white all over with surrealist prints on the wall) and walked over there. No big surprise, the pub was full of sailors, but they were concentrated at the back with the handful of women who were there (about four sailors per woman). I sat at the big wooden bar and ordered fish and chips to go and a shot of tequila to enjoy while I waited for the food. As I settled in, my eyes were drawn to the NBA playoffs on TV.

A few minutes later, I looked around and, out of nowhere it seemed, I had a guy sitting on either side of me. The second they got my attention they were both hitting me with a barrage of questions- where was I from, what was I drinking, could they buy me another (no), what was I doing in New York... Of course, they wanted to tell me all about themselves too. One guy was in his twenties from Israel having his first New York adventure, and the other was in his forties from Norway on a business trip. It wasn't the first time I've had men 10+ years younger than me and 10+ years older than me competing for my attention. It's a little disconcerting because 1) I'm trying to keep up with two conversations at once happening on either side of me, 2) I'm not very interested in either and just want to be left alone, and 3) the whole time my brain is frantically thinking "how do I get out of this?" I start to get this feeling that the competitive spirit has taken over for these guys, and I'm stuck in the middle of a grudge match between the desperate yearnings for female attention of The Youngster vs. Middle Aged Man. (It was just like the Stanley Cup final this year between the upstart Pittsburgh Penguins and the highly seasoned Detroit Red Wings, only way less entertaining and no one won.) And what do you want to bet that Middle Aged Man is married, and The Youngster has a girlfriend back in Israel?

When I finally got my food and was getting ready to leave, the youngster bitterly and sarcastically says to me, "It must be great for you to have two men trying to get your attention and you're not even interested." Oh yeah, it's great.

Wait, what is supposed to be so great about it for me? I'm the only woman in this bar who's not being monopolized by sailors, and these two guy want to get laid while they're in New York so of course they come sit next to me because there's no sailors around me to compete with. It has nothing to do with me- my intelligence, my personality, my creativity, or my Je ne sais quoi. I could be any moderately attractive woman (or not) and they'd be just as interested, and that's supposed to be flattering to me? That I'm fuckable. Wow. I am so flattered that the indiscriminate attention of men has landed on me. As a woman, my life purpose is fulfilled since random men who don't know me find me attractive, or at least, not so unattractive as to turn them off sex. How dare I not be interested?

I know New York is supposed to be such an amazing place, and it is, but the level is discourse here often leaves something to be desired. Case in point, my first conversation with a New Yorker on the street:

Every time I visit my company's New York office, I get into the Los Angeles vs. New York debate with one of the guys here. Actually, the debate usually consists of him ranking on L.A. people, that "they" (he leaves me out of this characterization, at least while talking to me) are shallow and silly and lame. At the same time, he acknowledges that his argument is very male-centric. As he says, there are so many women is New York that a man can dump a woman for the smallest thing he doesn't like because he can replace her so quickly. This trip he also told me that men in New York consider it to be their prerogative to date multiple women at once. I responded that there was nothing wrong with that, as long as the women were free to date other men.

"No" he says, "the men expect that the women they're dating are only dating him." I made a face at him, and he says, "Yeah, I never really thought about how unfair that is. I guess it's not so great to be a woman in New York. But I stopped acting like that and got married, so I'm not one of those guys."

I love it when someone talks themselves out of their own argument without me having to say anything. I guess if women are used to dealing with assholes, it doesn’t take much effort to be a “nice guy” in comparison. It’s the power of low expectations and a society that accepts the idea of treating women as commodities, like that cell phone that has all the features and the look that you love when you get it, but grows tiresome in the face of newer, different models.

Even the signs in New York are argumentative:
No Standing
No Bus Layovers
No Honking
No Parking
No Photos
No Videos

That said, I forgive New York because of Times Square, St. Patrick's Cathedral, Rockefeller Center, Central Park, and a store that appeared in between my hotel and our New York offices since the last time I visited- the NHL store (above). Of course, I was thrilled just to see the store, but slightly less thrilled by the prices (no t-shirts or other clothes below $55, hardly anything below $85. Ouch. Do hockey fans really pay these prices for crap other than jerseys? I guess if you're willing to pay $250 for a jersey, maybe.) I would have been totally disappointed if it wasn't for this shocking find- 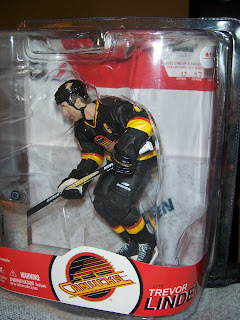 I was shocked, anyway. New York doesn't strike me as a Trevor Linden town, which is driven home by the commercials I see on the NHL channel advertising a commemorative video celebrating the New York Ranger's victory over the Vancouver Canucks in the 1994 Stanley Cup finals. (Grrrr. I have to change the channel when that comes on; it drives me so crazy.)

You can't really see all the detail in the picture, but it’s amazing. (Even more amazing, it was one of the cheapest things in the store at $14.99.) This super-cool action figure comes with a tiny little puck that has the NHL logo on it, but what really impresses me is that the handle and blade of the stick has "tape" on it. Stunning.

In my next blog post, I come up against the real wrath of air travel.
Posted by Tealrat at 1:26 PM

Of course they were attracted to your Je ne sais quois...I mean, that's the indescribably indescribable you about yourself. We all talk about it when we discuss you. Or at least we vaguely allude to it.

I don't think you should listen to that guy about New York. That sounds silly. Really? So many women that it's like an obligation to date more than one? Talk about vapid and shallow...

You are hilarious. I miss you. I'm gonna send you my favorite hockey book soon.

It has helped me in many, many ways and I'm so grateful to you for writing it.

It took me awhile to read the entire blog because I had to keep stopping due to (a)it triggering my own abuse memories and pain and
(b)getting so angry about what was done to you that I'd pace around my apartment until I calmed down.

Your writing is very powerful and you have a real talent for it.

I'm very interested in buying any book you write.

I'll continue reading your blog and I'll be watching for news of a book.

Wow, thanks! I feel very encouraged. I would be writing more on my blog and my book right now except that I am having a lot of PTSD symptoms. When they calm down I will be able to write more. I am hoping to make more progress on the book and start giving updates too.

Thanks again. I am impressed you read the whole thing. :)