Rose Red, I will make you tell the truth 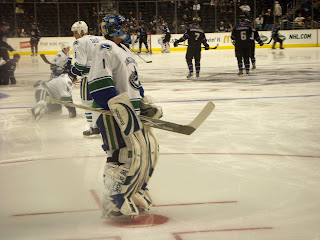 Why is it that I think of things to write about on my blog a million times a day, but when I sit down to write I forget it all? Then I write about hockey because it is in the front of my mind. I keep picking up one of my many half-read self-help books, reading a couple paragraphs, getting freaked out by how much I relate to it and how daunting all my emotional problems seem, and getting really tired. Avoidance. I don't really know what to do. I just want to play hockey and hide in my apartment.

I stopped seeing my psychologist when I started getting a lot of PTSD (post-traumatic stress disorder) symptoms because she didn't know what to do about it. I was counting on her to recognize when I was getting sick/sicker again and step in and help me. I think that was what I was paying her to do. I even told her, repeatedly, that things were getting bad for me, that I was having symptoms, and that it was the PTSD. She told me that I was being hard on myself and my self-talk was negative. I told her, no, this isn't about self-talk, this is about me having a serious illness I've had since I was young, when the abuse started, and I had to cope with it the best I could. Then it was compounded by more and more trauma. This is more than 30 years of emotional damage. 30 years! (This is why I get overwhelmed when I think about trying to sort through it all.)

The whole time I was seeing this psychologist I kept asking her to do PTSD work with me. I did this work with the woman I was seeing in Seattle before I moved. She taught me how to calm myself down when I got anxious, and then walked me through flashbacks I was having. We "worked" them, which turned them into more normal memories instead of flashbacks, and lessened the terror and emotional impact they had over me. You can't really do this kind of work when you are having bad symptoms though. If you are anxious and overwhelmed then the flashbacks are just reinforced. (I am kind of glossing over what the "work" is, but I am trying to explain it without going off on a tangent. I did explain it in more detail at the blog post here.)

So I told the woman in L.A. about what I was doing in Seattle, and she said we could continue that work (which was helping a lot) but when I brought it up she kept saying she didn't think I was ready yet. That did not make a lot of sense considering that I had already been doing the same thing I was asking her to help me with, but I thought maybe she thought I needed to get more comfortable with her or something. Now I feel like I wasted more than a year seeing someone who, despite the fact that she listed PTSD as a specialty on my health insurance's website, doesn't really know squat about PTSD. This is very irritating. Self-talk is not my problem! I have a mental illness. A treatable illness, one you can recover from, but also potentially deadly. (Just ask my brother. Oh wait, you can't, because he's dead.) I need treatment. Why is it so hard to get treatment? It's in the DSM (Diagnostic and Statistical Manual of the American Psychiatric Association, used to identify and diagnose mental disorders), people. It's in the DSM!

An interesting thing about PTSD is that it is essentially the same disorder no matter what caused it. There was a PBS Frontline show about PTSD in soldiers coming back from Iraq called "The Soldier's Heart", and I was amazed at how much of what was said I could relate to, even though they were talking about the psychological damage war does to people, and never mentioned abuse or rape. (Although they did talk about suicide, as one of the soldiers profiled killed himself.) When someone on the show (an expert) talked about how repeated trauma, like sending someone back to Iraq who has already been, compounds PTSD, and when the family of the man who committed suicide talked about how he tried to cope with what he had experienced in Iraq after coming back to the U.S., and how he changed, I thought about my brother and myself and felt like they might understand what I am going through.

In January, I was really upset about what was happening in Gaza (and how disengaged from the horror and death most people in the U.S. seemed to be). On the news I saw a Palestinian man at a hospital, explaining to a reporter what he experienced when the hospital had been bombed while he was working there. During the interview, the hospital was bombed again, and he had the most vivid look of terror, shock, and confusion on his face I had ever seen. I froze in front of the television. I felt like I knew what he was feeling, like I was having a moment with this man. I can't even imagine the terror of being a warzone, seeing people dying around you, experiencing that kind of fear for your life and the destruction of everything around you, even feeling responsible for other people dying, but I know the feelings behind that look. I can't comprehend why this is happening. This is beyond my ability to understand, to accept. I don't know how to live through this.

(The title of this post is a quote from a Hole song called "Asking For It" and is also a reference to a book called "The Hanged Man" by Francisca Lia Block. Rose Red is a character in one of those creepy old fairy tales that Disney kept sanitizing for mass consumption and taking out the disturbing parts so they can sell merchandise to princess lovers everywhere. Though they haven't got their hands on this one yet.)
Posted by Tealrat at 9:24 PM

Rose Red is indeed a creepy character. I remember reading "Snow White and Rose Red" when I was little.

I hope you find another therapist (if you're looking for one, and I assume you are.)

I'd like to talk to you some time, but you're so busy I don't know when to get ahold of you! :P

My heart goes out to you because it is so tough when you're in really bad shape and have a therapist you isn't hearing you.

So I'm sending good vibes and prayers for the universe to connect you with a therapist who will be exactly the right person for you.

I've too have severe IBS and stomach/food problems and just wanted to mention Buyterex by T.E. Neesby as something you might want check out.

"By metabolizing fiber in the colon, butyrate helps produce the energy necessary for the health of the large intestine. It is especially helpful for soothing the gastrointestinal system."

Well, take care and thank you again for writing your blog....it helps me more than I can say.