You're hungry, but I'm starving 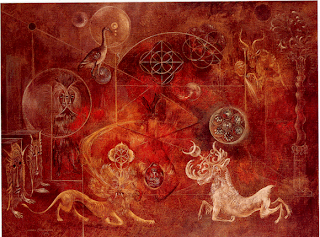 I'm having one of my confused times, where my emotions are so active, swirling around in my head, that I have a hard time making them concrete enough to write about them. I have been going to therapy once a week, and my emotional problems now seem much larger then they did before. Denial, I suppose. I've been trying to put my life back together for some time now. I emotionally and psychologically separated from my past, at least in my conscious mind, built walls between my present and my past to try to protect myself from overwhelming and confusing feelings that I didn't have the perspective and support to resolve at the time. Of course it was all still there, in my subconscious. Therapy is bringing it back into my consciousness. This therapist feels kind of like a parent, the kind of parent I never had. A parental figure who knows more than I do, who I can let down my guard a little with. Sometimes I feel like I am reverting back to an 8 year old, at least in the way that I feel. I'm seeing now that the things I am struggling with have their roots back to that time, and earlier.

I went through two photo albums and scanned some of the pictures into my computer. They are from when I was a baby up through age 21 or so. The more I look at them, the more solid I feel. Disconnecting from the past made me groundless, like I was a ghost of myself. I am starting to feel more real, more myself. This is uncomfortable too, because I am still struggling with intense feelings of terror, betrayal, and confusion. But I feel better, even though I am sometimes overwhelmed with everything that comes up, and stress, and a lot of resistance. I feel better just feeling a little more solid and real.

I have gotten back into reading fiction lately, which also reconnects me to my childhood. I loved to read so much back then, and my favorite were fantasy and adventure stories with a strong protagonist, that came in a series. So I've been reading both the Sookie Stackhouse books (by Charlaine Harris, the ones that the TV show True Blood is based on) and Harry Potter. These totally remind me of books I would read as a kid. I caught up on the Harry Potter movies first, but I am really enjoying the books because of the detail, especially hearing more of the character's internal dialog. I can't help but to relate to Harry- how he is troubled and conflicted, struggling with guilt and resentment, yet still the hero and a likable character. The way his aunt and uncle jump all over him and punish him just for being himself, how he can never placate them, and how they make it obvious that he is not their favorite- yes, I can relate to that. The fantasy of being whisked away from a cruel family to be with people who understand and appreciate you- this is an appealing fantasy for me. Even though it is not a fantasy that is relevant to me as an adult, it brings me back to my childhood, and the pleasure I take in it is for myself as a child. The fantasy of good vs evil is appealing as well. I find it very satisfying when the underdog triumphs over the (almost) overwhelming forces of evil. Part of the agony of PTSD is living with the affects of evil that you could not fight, could not win against, so it feels good to at least imagine the defeat of evil.

The Sookie books- well, when I got to the part in the first book (Dead Until Dark) when Sookie is describing her great-uncle fondling her, and her family trying to simultaneously deny and minimize the sexual abuse, it hit almost too close to home. I really bonded with the character at that point. Again, with those books, you read the inner dialog and feel the range of emotions, often conflicting. The characters are likable without being perfect or having their emotions always under control. People have outbursts; they get upset. I used to think my dad was scary because he had emotional outbursts, but now I understand that those weren't emotional outbursts. He wasn't out of control, he was highly controlled. He used "emotion" to manipulate and control other people. When I look at pictures of my dad now, I remember how cold and calculating he really was. I remember how hard his eyes were. Getting upset and having feelings doesn't make you abusive, and it shouldn't make you the target of abuse either. Somehow reading about these character's feelings is helping me feel better about having them myself.

I am learning, and trying to take in, a lot of big deal realities about myself and my experiences. Huge stuff. One of the hardest things for me to struggle against is that I learned to suppress my feelings to protect myself as a kid. It was dangerous for me to express myself back then. It feels very, very scary for me to feel things, because if I let myself feel and react to stuff that happens or things in my head from the past, I cannot always control my feelings, and I instinctively feel a lot of terror at the idea that people will know how I am feeling. This is not going on in my rational mind, it is happening in the part of my brain that is very, very concerned with survival. When I expressed emotions in my family, I got the shit beat out of me. I thought I would be killed. On at least one occasion, I almost was. That part of my brain is very powerful, the part that is trying to control my feelings because it thinks it is saving my life. It did save my life, many times. I just don't need it the same way anymore. It doesn't believe that. By piecing together my timeline, looking at myself as a kid, relating to who I was back then, it seems to be slowly seeping in that things are different now. I am not different, but my life is different. I am still who I am but my environment is less threatening.

Less threatening, but not entirely. I have been having nightmares. I feel tired and nauseous. Earlier tonight, someone knocked on my door, and I have been too scared to leave since then because I am afraid whoever it was is waiting for me outside. My dreams are awful. Disturbing. There are a lot of monsters living in my head. I like the monsters in my books a lot better than these monsters in my head.
Posted by Tealrat at 10:23 PM

In so many ways we are twins! Someone knocked on my door last night and I've been terrified, too. I have been having freaky nightmares recently.

I understand your identification with fictional characters. Will you be my sister? :)

So glad to hear that you are having a positive experience and relationship with the new therapist.

So sorry to hear that things have gotten more intense for you as you work through such incredibly difficult experiences and emotions.

I'm always blown away by your courage and strengh!

Of course! Let's all be strong superhero sisters. :) Everyone needs support, even superheros.