In gratitude for the Olympics, Part 1 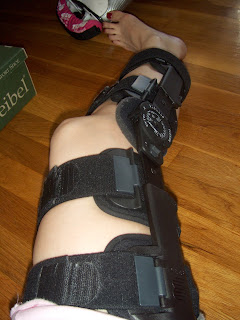 First, me. My knee injury from the Vegas tournament is a grade 2 strain and partial tear of my medial collateral ligament (MCL) and possibly a small meniscus tear. (The meniscus tear was diagnosed by the MRI doctor but my knee doctor was not so sure. For sure, the MCL tear is the most serious part of the injury.) Because it is a partial tear and the MCL rather than the ACL, I don't need surgery. Relief. Also, the recover time is not so bad- 6 to 8 weeks from when I saw the knee doctor about a week ago. I can start physical therapy in a week. Besides that, all I'm doing is icing it, elevating, and taking anti-inflammatory drugs. Oh, and wear the ginormous brace you see in the picture.

The doctor said it was preferable to wear this brace because it has so much support, but that I could choose a smaller velcro brace instead. He said I just need to actually wear it, so if I'm not going to wear the big one, it would be better to wear the wimpier one than nothing. I tried on both, and instantly loved the big one, the one I have, because I could walk without pain. Sleeping with it on is so much better too. I was waking up 4-5 times a night because of the pain, and waking up stiff and barely able to walk. The brace stabilizes my knee so I don't wake up during the night and feel a lot better in the morning. However, I definitely understand now why some people might not comply with wearing it. I hate to complain about it because it's made things so much better, but here goes:

1. I can't wear regular pants. I'm not supposed to wear anything under it, not even tights, so it doesn't slip around. So my only options are skirts (keeping in mind that it's technically winter and my legs are bare) or GIANT pants. This basically translates into huge sweatpants or pajama bottoms. I am lucky that I live in So. Cal. on this one. I actually wore dressy shorts to work the other day, but I still had to roll up the left leg since the brace goes so far up on my leg. Dressing for work has been a pain, and I basically have to shave and lotion every day so my legs look someone classy despite the overwhelming bareness of it all. It still feels immodest regardless of what I do. Even better, I'm going to the Olympics in Vancouver this coming Tuesday through Friday (hooray!), and with the weather and being in ice rinks most of the time, we're looking at the biggest public viewing of me ever in pants I would normally only wear in my apartment at night (or not at all due to their HUGENESS). This makes me slightly bitter and I'm already embarrassed for myself and the city of Vancouver. I miss my jeans!!!

2. I can't wear boots or high-heeled shoes because of how far down my leg the brace goes. Most of my work shoes are heels, and my weekend footwear are boots. I do have Doc Martins that are short enough, and I can roll down my Uggs. I am just not a big fan of work flats and I'm starting to feel overwhelming jealousy ever time I see someone at work wearing cute heels. Damn. I really miss my boots too, and now I can't wear the ones I was planning to bring to Vancouver.

3. I keep hitting the dial at the knee against my other knee, especially when I get in and out of the car, and consequently I have bruise city going on at my other knee. I keep running into things with that leg too. It's not exactly the most graceful thing you could wear. I hit other people with it; I run into furniture. It is kind of cool that I look like the bionic woman's pathetic half-sister, and since it is so prominent I get lots of opportunities to tell people I got a cool sports injury, but f- this. I want my normal-sized leg back.

4. The plastic pieces around my calf are digging into my calf muscle and it hurts. (I was in ballet and played soccer so my calf muscles are pretty developed, i.e. big.) My skin under the brace also itches. I love it when I take a shower or ice my leg because that's the only time I take it off. Ahhhhhh. (I'm icing it right now.)

5. This is not the fault of the brace specifically, but I miss playing hockey so much!!! I'm going crazy here! Hockey is my stress-relief, my social life, my life generally... At least I can still go to the rink to watch and see people, and go to Kings games to get my hockey fix, but DAMN! It's not the same. If I don't end up sneaking on the ice at some point, with the brace on (my hockey socks will totally fit over it) just so I can skate around a little, I'll be surprised. Waaaaaa! I wanna play so bad. I'm glad the person on the other team I was with when it happened is my good friend who just happened to be playing on a different team in the tournament. I feel bad that she feels guilty, but it totally was not her fault. It was just the way I fell with my leg up against the boards. But if it was someone I didn't know who I blamed for what happened, I would be so pissed at her and I'd probably be plotting an evil and totally unfair revenge (that I would never act on, but still. I don't need that distraction.)

I am trying to focus on my hockey fandom to distract me from my injury-related depression, so I am grateful that Olympic hockey started today! I watch quite a bit of NHL hockey, but don't get the chance to see a lot of women's hockey. I would say that men's and women's Olympic hockey are fairly similar, but NHL hockey, where a lot of the Olympic men normally play, and college women's hockey, where a lot of the Olympic women normally play, are different. Not totally different, but definitely a different style. Watching Olympic women is very inspiring to me. I am waaaaay not in their league, obviously, but much more what I aspire to than NHL-style hockey. I do get sucked into watching the Olympics a lot, more than I intend to most of the time, because it is an opportunity to see the best female athletes in the world. I have always considered myself to be an athlete, even though I've never been close to playing at a high level, so these women are my heroes. Playing hockey now has definitely taken the sting out of not being able to play soccer in college, and watching the best women in the world play hockey is so exciting. Hockey = awesome.

Even though the Olympics are in Canada and Canada is all about hockey, even men's Olympic hockey is not getting a lot of TV coverage or attention in the US. I am going to get to see at least three, hopefully four games in person. We have tickets to the men's Russia vs Latvia and Russia vs Slovakia games, and women's Sweden vs Canada, and hope to get into the women's US vs Russia game. I really want to be an informed fan and share what I find out (with my boyfriend's help, who did a lot of the research for me. Thanks!) So I am going to post some information about the women's teams and women's Olympic hockey in general on my blog. I figure there's plenty being written about the men, especially the players who are also in the NHL, but not a lot about the women. So today and until February 25 (the day of the bronze and gold medal games), you can expect to see my first foray into sports blogging. Here goes.
Posted by Tealrat at 2:50 PM

I'm so bummed to hear that you're in a leg brace and can't play hockey; but, I'm so excited that you're going to Vancouver!

Have a wonderful time!

Thanks! It was completely awesome. :)