Thrown under the bus! 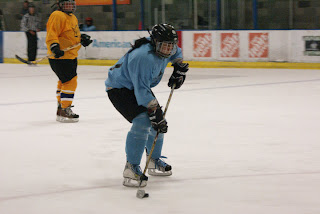 Not to repeat myself, but I am still really tired. I was actually feeling so bad that it was affecting hockey. I felt so burned out that I quit one of my teams. Don't worry, I still have two teams. I'm a baby blue smurf and a dirty martini monkey girl. My smurfs are in between seasons, but I'm a new co-team rep with my good friends Lori and Jamie. I think being team rep has actually invigorated my passion for hockey, although my passion for the team never waned. We are underdogs and I love underdogs.

The Dirty Martinis are still playing our summer season, and we have our second double header this Saturday. I am excited. Doubleheaders are fun even though I feel like I could collapse any second. The only thing I really have going for me is that I try really hard, so it can be hard to balance my energy level for that long. I feel like I'm either giving it everything I've got or about to keel over, and that doesn't work very well when I have to keep it up over two back-to-back games. But I love it. One of the reasons I quit one of my teams is so I'd have more time to practice. I find that I play kind of crappy when I don't practice, and I haven't been practicing. I haven't been to Monday night pick-up in ages, and I love Monday night pick-up. It is one of the funnest things ever.

I'm still belly dancing (cross-training). It's a lot of fun too, although I'm not very impressed with myself. I'd have to give myself a "C" for both hockey and belly dancing. It's a good thing I don't mind sucking at something if it's fun. I'd have to give myself a "C" grade at being a girlfriend too. It's fun even though I feel like a disaster a lot of the time. I really don't know how to be a girlfriend with a guy who is not a jerk. My boyfriend is very patient and kind and sweet. He is truly a good guy, and super-sexy. The poor guy seems to like bitchy women, though. His ex-girlfriend won't even look at me, which gets a little humorous since they are still on a hockey team together and just the other day I was at their draft. I was impressed that she managed to go more than an hour without looking at me, even when her and my boyfriend were talking to each other and I was standing next to him. I don't think I would have that kind of control. Myself, I spent a good portion of the time looking right at her, staring-contest style only opposite, trying to get her to look at me. She won. It kind of floors me since she wants to be friends with him, and I never did anything to her besides date her ex, and they have join-custody of the dogs, and she has a boyfriend (who's on the team too) so you'd think she'd get over herself and quit it, but I guess not.

I have to admit, though, that when I'm watching their games and she gets knocked down, I snicker a little. I really don't like her. I don't like how she treats me. I don't like how she treated my boyfriend. I think she's crazy for breaking up with him, although that's definitely to my benefit. I don't like that she acts like she still has some kind of hold on him, and I really don't like how jealous that's made me. That's one of the reasons I'm giving myself a "C" as a girlfriend. I have jealousy issues. I'm so afraid of being left/abandoned that I get all emotional and irrational and I'm embarrassed that I need so much reassurance. I am trusting him a lot more now, so the jealousy has calmed down. It only took me 9 months. My trust is like a baby.

My mom keeps calling me because she wants to talk about, get this, how my crazy, stalker ex that I broke up with almost 8 years ago contacted her on Facebook. He contacted me a while ago (at least a year) on Facebook and I blocked him. I also, somewhat regrettably, kind of flipped out on a friend who ran into him and kind of indicated I was on Facebook or something. I was a little pissed. This guy is a nightmare, and the message he sent me let me know he hadn't changed at all. It's embarrassing that I dated such losers. No wonder I had such a hard time believing my current boyfriend was as wonderful and trustworthy as he seemed to be. Now I'm pissed at my mom. She's doing my ex's dirty work for him. He just loves terrorizing me and she just can't say, "Obviously, my daughter doesn't want to talk to you, so leave her and me alone." As if she would ever stick up for me, or do anything to protect me. No, it is always up to me to protect myself. No, she never feels any responsibility to shield me or defend me or think about how her actions, or lack thereof, affect me. Oh no, I'm her daughter but I'm supposed to be caring for her. Yes, I'm bitter.

At work, one of the most popular phrases is "throwing someone under the bus". It happens in meetings a lot, where someone told you one thing, but says something completely different in a meeting in front of superiors. Or, something gets put on you in a meeting, like you get blamed for something or called out for something or someone tries to deflect blame from themselves by pointing out something you did or didn't do. One of the things I love about my boss, and about my whole team, is that we do not throw each other under the bus. Yesterday, I was thrown under the bus by someone in another department, to her superior who has no authority over me but seems to think he does. Actually, you could argue that she tried to throw one of my staff under the bus, but I was not about to let that happen. I told my therapist about it yesterday, and about my mom calling me, and the session came full circle when I reflected on how much I hate being thrown under the bus because my entire childhood was about getting run over repeatedly by that bus. So I'm mainly pissed at my dad for being the bus, but of course I'm more than a little resentful that it was my own mom throwing me under. Just to clarify in case you didn't catch this in the many pages of ranting in my blog so far, my dad was abusive to my mom before I was born, and then she was perfectly content to let it transfer to me when I became the target, and then the second me and my brother were out of the house, she left to protect herself. But not us. No, not to protect us.

Yes, I'm bitter. I really want to cut these throwing people under the bus, and buses, out of my life for good. This is how I'm starting to see people- there's buses, and people who throw you under, and people who are indifferent to your screams, and those wonderful people who come pick you up, or prevent it from happening in the first place, or, amazingly, will throw themselves under to protect you. I love those people.
Posted by Tealrat at 10:51 PM

I recently cut my own mother out of my life after years of waiting for her to change. Ten years ago I gave her an ultimatum that she had to change or she would cease to be part of my life. Recently she tried to break up my sister's marriage and that was the final straw for me. So I had a conversation with my sister and we both decided to take this action. My mom is aware of how my sister feels but my mom hasn't bothered to contact me at all. Perhaps she knows better or simply doesn't need anything from me at the moment. When she does call or visit (she recently relocated to my area) she's in for a rude awakening. I find myself feeling strangely brand new as if some shackles around my well-being have been released and I'm free to be who I want to be without being held back by notions of having to honor a person who has shown me nothing but dishonor.
People who show me such meanness when I try my best to show them kindness and love seem to abound all throughout my life. I thought even in the HoN I would find a family, but I have found the same thing. Meanness, distrust, rudeness and a controlling attitude. Then I'm accused of being the bad guy and had terrible things said about me. I see this as the abuser's attempt to re-direct attention away from themselves (thus keeping others from scrutinizing their own actions too closely) and put the blame squarely onto me. I don't throw people under the bus like that. What I do however is simply walk away or take the train. They have issues I cannot "fix". I know the difficulty in changing my own habits, how much harder it is to change someone else. So I treat them with kindness, while pointing out to them the error of their ways or at the very least how and why they offended me. Perhaps they will meditate upon my words and seek inner change or perhaps not. The thing is it's their responsibility to change and not mine to change them. I can only show them the way. I hope.