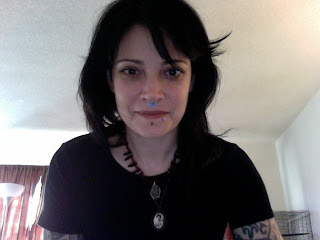 I'm completely freaked out today. One of my teammates on my Lady Kings hockey team was seriously injured last night. An ambulance had to come and take her off the ice on a gurney because she couldn't move. It happened because of a collision that was right in front of me. We were wing pairs at the time. We (the team) haven't heard anything about how she's doing, and I'm very worried. I've been doing things all day to try to keep my mind off it, so now I'm on blogging.

I'm always reading or hearing about things going on in the world I want to write about, so I thought once a week I could share these bits and pieces. Firstly, I'm very excited that a friend pointed me to a support group in Santa Monica. It is part of the ASCA (Adult Survivors of Child Abuse). The group is run by survivors, but they follow the ASCA program. They call it "Survivor to Thriver" and there's a manual and steps you can follow to help you process what happened to you and come out the other side. I am just so thrilled that this organization exists. It is a huge undertaking to work through childhood trauma. It is terrifying for so many reasons. You have to be willing to disrupt the delicate balance you've found in your adult life. Lots of people stay in denial because they don't want to or don't feel they can relive the pain they've suppressed. But it feels hollow to wall off parts of yourself that way, and you might feel like a fraud because you're hiding yourself, and your life feels derailed. You wonder who you would be and where you would be if this didn't happen. I want to feel real, like I am really living and being who I am. It is like diving into an underground lake and trying to find a different shore. What if I get lost in all the grief and anger and bitterness and despair, and never make it back to the surface? It feels very alone to be in that place, but to have a structure and steps and people who understand me and all my weird ways of thinking and coping mechanisms makes it feel possible that I could get through this. It is amazing to listen to other people articulating things I thought I was alone in. It was so terrifying to get myself to the first meeting and I thought I would just fall apart or melt away the second I walked in, but I was definitely not the only one who felt that way. I went to my second meeting last Thursday, and actually volunteered to help with the meetings. The Santa Monica group meets every Thursday at 7:30 pm. They communicate through a Meet Up page. ASCA is an international organization, and their website has information on finding a local support group, as well as virtual groups and a forum. This is the most hopeful I've felt all year.

Did you know that American Catholic nuns are radical feminists? The other day, The Daily Show was rifting on the Vatican condemning nuns for focusing on serving the poor rather than spreading their anti-abortion and gay marriage agenda. Yes, nuns are wicked awesome. If you really want to hear some ass-kicking nunnery, I highly recommend Fresh Air's interview with Sister Pat Farrell, the president of the Leadership Conference of Women Religious. The Leadership Conference represents 80% of American sisters. They talk about the hypocrisy of the Vatican going after nuns when they still haven't fully addressed sexual abuse within the church, the radical idea that women have a place in the church, and whether there is room for questioning in the Catholic Church. Personally, I consider calling someone a radical feminist to be high praise, but Sister Farrell's opinions are hardly on the lunatic fringe of feminism, and don't seem to break with the history of Catholic nuns at all. Haven't nuns always helped the poor? Why would an organization of Catholic women oppose women having a place in the church? It seems unlikely they would participate in an organization representing Catholic women if they felt they didn't have a place. The larger issues, I think, is the Catholic Church focusing more on furthering political stances rather than the work of Jesus, and the idea that being religious is incompatible with having a brain.

Rock on, sisters! You're a credit to religion and feminism, and doing the always important work of speaking out against the misuse of power. Respect.

The nuns I knew in Catholic School were great and wonderful women. Too bad about the religion thing though!

Ha! Yeah, there was a group of Christian churches in the U-district in Seattle that fed the homeless teenagers (Teen Feed) when I was there, and they were so nice and caring and didn't try to preach to us at all. They did it because Jesus cared for the poor, and they were doing his work, not to convert people. Before that I had a pretty poor opinion of religion because my experience had been with people who were judgemental and kind of mean and insensitive to people not part of their group. I really admire people who focus on the service aspect of religion. Thank you for your comment! Sorry I was so slow in responding. I've been struggling with my blog and some of the negative backlash I received. ~Kristina