the middle is the best part 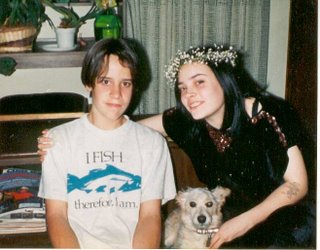 Last Wednesday was my second SOS (Survivors of Suicide) group therapy meeting. We have homework to do every week. The facilitator gives us only the homework for the next week, so we cannot look ahead. This is probably good for me, because I always flip to the back to see how it ends. I figure there is nothing wrong with doing that, because even if I know how something ends, there is still suspense for me in how we get there. I like to know where I am going, even if I do not know how I get there. I do not like surprises, and not because I think unexpectedly good things will happen.

I suppose this makes me a bit of a control freak. I am usually not willing to just go with it- whether "it" is a book or therapy. I just started watching Six Feet Under with my boyfriend. He has watched the HBO television series before (all 5 seasons), and loves it. I had heard of the show, but never seen it before today. We watched the first 3 episodes. I keep asking him questions he would not answer- "Does he know about that? Is he going to find out? Who is she talking to? When are we going to find out?" My boyfriend is making me wait and find out.

I will admit it kind of freaked me out to watch a show that was all about death. If you have never seen Six Feet Under, it is about a family that runs a funeral home. In the first episode, the father dies. In fact, someone dies at the beginning of every episode. When they showed embalming, with the blood draining out of the person and the embalming fluid flowing in, and a character talked about reconstructing someone who had put a gun in his mouth so there could be an open casket funeral, I thought about my brother. Instead of feeling angry or upset, though, I felt really comfortable and relieved to be watching a show that actually acknowledged death and grieving, and did not sugar-coat it or try to get away from it. I am so lucky to have a boyfriend who wants to be with me and support me while I try to get through this.

He has been very patient with me this week. Last Tuesday night, he was at my apartment while I was doing my SOS homework for the next meeting. All I had to do was write about my feelings, at the time of the suicide and now. It triggered a complete breakdown; I was crying and wailing for the rest of the night, in part because my feelings have not changed a lot in the last 9 years. I have not dealt with how I feel, really, so I am still stuck in guilt and anger. The feelings are not as intense as before, but I have not moved on to another stage. I think, after letting myself feel it both the night before and at the meeting, I understand why I was clinging to the guilt and anger stages in the grief cycle (shock and denial, anger, guilt, bargaining, depression and despair, and reconciliation and acceptance. You do not necessarily go through these stages in this order, or one stage at a time, but I have been stuck in the first three primarily. I have been in the bargaining stage before, which was scary. I was screaming to my brother to come back, because I could not handle losing him. That was almost 6 years after his death.)

My brother was the only person I trusted. His death destroyed my faith in the world. I felt that because I knew him and understood him so well, I should have been able to help him. His friendship, humor, and appreciation for me had carried me through my painful childhood and kept me going as I struggled with my adult life. He had always been there for me, and I thought he always would. Losing him was the worst thing that could possibly happen to me, and I thought that I let it happen, and that I had failed him. When I think about how desperate and alone he must have felt, it is hard for me to accept that my affection and appreciation, and the bond that we shared could not carry him through. If I did not do something wrong, I feel like he just rejected my love and our close relationship. I question my own worth, because what good am I if I could not help the person I cared about most?

I realize, intellectually, that it was not my fault. He knew that I loved him and was there for him, and did not reject me. Holding on to guilt, though, has helped me avoid fear that seems worse than the guilt. Terrible things have happened in my life, things that came about because of other people's choices, not mine. It is very scary to acknowledge that life-altering events that have affected me so profoundly, that have changed me, were out of my control. You could say, in some sense, that I was a victim of circumstance. I have read and heard people say, about a million times, that you cannot control other people, just yourself. That means there is a lot that can still happen in my life that I cannot control or choose. Considering my track record, that is a scary realization. Trusting is a struggle for me.

The other thing that has been hard is that when I succeed in letting go of guilt, I move into depression. It is comforting to think that depression is just a stage (I hope). Dealing with the sadness and depression seems like a very daunting task, worse than guilt or anger. This is how an SOS handout we got last week describes it- "These initial stages may allow you to deny your loss, to feel anger that it has occurred, and to bargain for life to return to normal. None of these has changed the reality of the situation. Now you may be left with anguishing pain, unanswered questions, the heartache of loneliness. Sadness and tears often seem to have no end. Depression and despair characterize this period. You may feel drained of energy, and even the day-to-day tasks of living can be difficult. Fears of being unable to cope often surface." (Crisis Clinic of King County)

It does help to break down and cry. It helps to tell the people in my SOS group my fears, and to describe the anguish that I feel. It helps a lot to tell my boyfriend how I am really feeling, especially because he does not turn away from me. He listens to me and accepts my feelings, even when I feel irrational (and embarrassed about it.) For the first time, I feel like I am making progress.
Posted by Tealrat at 10:14 PM

I'll keep doing my best to keep mum about the Six Feet Under plot points. :)