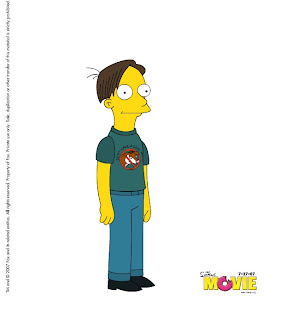 Today is the 10th anniversary of my brother Jeff's death. I've been dreading today since the beginning of this year, most intensely for the last 2 months or so. It constantly creeps into my background thoughts, along with how I need to learn Spanish for my job, I wish I could lose the weight I’ve gained since I moved to L.A., missing my friends in Seattle, and affectionate thoughts about my boyfriend. I feel kind of numb. I cried this morning, but I can't cry anymore. I’m tired of crying. I'm watching the Simpsons and laughing instead. Jeff loved the Simpsons, and we used to quote the show to each other all the time. I bought seasons 1-6 on DVD last week so I could have the shows to comfort me this weekend. After Jeff died, I taped the first 12 seasons from the reruns on TV, and watched them until the tapes were too warped to play anymore. It’s hard to believe that the Simpsons movie came out just last month. I saw the movie a couple of weeks ago, and it was pretty fantastic. Jeff would have liked it.

I'm trying to concentrate on how great my brother was instead of fixating on the tragedy of his death, and I'm being good to myself this weekend. I don't want to feel anymore guilt or regret. Carrying it around has been exhausting. I went to a Korean spa and got a massage there yesterday to detox. The woman covered me with oil (it's a naked, women-only spa) and worked on my knotted up back and stiff legs. She also washed my hair, covered my face with cucumber, and rinsed me off with milk. It was sometimes hard not to slide off the table with all the oil, water, and milk. The Korean women who do the massages wear black cotton underwear and bras, and are totally no-nonsense; although the woman told me I had a pretty face. It was like getting a massage from my Korean surrogate mother. After the massage, I alternated between a hot tub, a hot tub filled with mugwort tea, a cold bath, a steam room, and a jade and oxygen sauna. Then I slept on a pad on a heated floor, and then ate Korean food in the spa's cafeteria. I was there for 5 hours. One of my friends here in L.A. introduced me to this spa. It only costs $15 to get into the spa (more for the massage of course), and you can stay as long as you want. There is also unlimited barley tea, water, conditioner, lotion, q-tips, and overheard women's conversation. A lot of it is in Korean though. Some women were there by themselves (like me), but most were with a friend or family members (a lot of mothers and daughters). It's a very comfortable atmosphere, hanging out with lots of naked women relaxing together. Everything I did was supposed to be detoxifying. I was hoping it would also be emotionally detoxifying, like, I’m not perfect but that’s okay.

I wish I could call my female friends right now to talk, but I just don't feel like I can right now. Death. It's overwhelming. I just want to lie down on the couch or eat soy ice cream while I watch season 4. It's a great season. I need to go to the store. Tomorrow this day will be over.
Posted by Tealrat at 2:07 PM

Email ThisBlogThis!Share to TwitterShare to FacebookShare to Pinterest
Labels: depression and guilt, movies and TV, suicide

Hi Kristina,
The Korean spa sounds really interesting and amazing!! I wish I knew a place like that in Boston. I'm glad you found a way to treat yourself during a tough time. Take care,
Marianne

Where are you hanging out in Boston? I would like to visit sometime. :)

I will try to call you soon. I've been really overwhelmed by life as well. You inspired me to take better care of myself with this entry so I went out and bought myself some flowers. Much love.

I'm in downtown Boston, by the Prudential! COME VISIT!!! I will email you soon :)

Strangely, we (my husband and I) were at his grave a few days before. I told him how I felt, and that I was sorry. I knew...and I didn't.

We couldn't find anything that looked right to put up there, or we would have.

Odd question: Do you have my phone #? Would you like it?