Doing the things a spider can 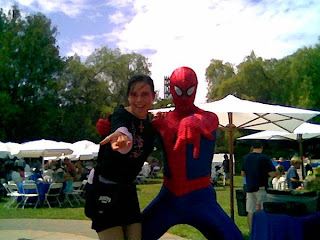 I am moody. This, despite the fact that I met Spiderman. *sigh* When I feel this way, I tend to avoid people because I'm no fun to be around and I don’t know what to say. I'm trying to get back out there, though, because I'm making it worse by isolating myself. I keep apologizing to my boyfriend for being a bitch and complaining about my ever expanding badonkadonk. (I’ve gained weight since I moved here. Too much eating out and driving everywhere, I suppose.) He assures me that he disagrees with both characterizations, which is nice of him.

I think I'm in a rut. I just want to lie on the couch and watch Mythbusters, except that Discovery keeps showing Survivorman instead. I can't stand that show. We've had a "heat wave" here, which did not help my motivation. Last weekend it got to around 110 degrees (Fahrenheit). Thankfully it's cooled down in the last couple of days. The San Fernando Valley is especially hot. I work in El Segundo, which is on the coast about 20 miles south of Reseda (in the heart of the valley, where we live. It's also the home of the Karate Kid, and that Tom Petty song, and countless movies are filmed around here and not just pornos either.) When I drive home, the temperature gauge in my car creeps up about 15 degrees. You can definitely feel the heat.

The first day of school was yesterday. That may not seem relevant to someone 15 years out of high school, but it means the traffic just got even worse. On a positive note, I got to see gaggles of valley vampires headed to school in their first day finery. When I told my boss how cute they were, he asked, "Don't they wear uniforms?" I replied, "Yeah, tight black pants and studded belts." They're so adorable. They remind me of my teenage years.

I'm getting sick of this whole feeling depressed thing. I don't want it to get worse. I'm too old to feel like a Black Flag song. I started working out again; that usually helps. It makes me feel better just to listen to my iPod while I sweat it out on the cardio machine. I stopped eating meat at lunch. Meat is murder, you know. I'm trying to call and email people, even though I feel whiny and boring right now. We've done some fun stuff lately, like we went to an L.A. Galaxy game and saw Beckham play! He got injured after a half hour, but it was a very exciting game that went into double overtime and a shootout. I've seen some fantastic movies, like Superbad, Sunshine (loved it), The Simpsons Movie (loved that too), Live Free or Die Hard (one of the craziest action scenes was filmed on the freeway outside my work, along with a car commercial I just saw on TV), Stardust (very sweet and entertaining), and Ratatouille (cutey rats!). My boyfriend has a talent for knowing where movies were filmed, so he took me to the place where the karate kid was beat up, where the cops did donuts in Superbad, and the mall at the end of Superbad. I also visited New York for the first time (for work), and read a Shakespeare poem at my friends' wedding in Seattle. I got to see my bff (best friend forever) in Seattle, who is probably moving to England soon! I'll go back to Seattle to see her before she leaves. Until then, I'll just keep on keeping on, I suppose.
Posted by Tealrat at 8:03 PM

I've gained some weight too, not much but just a little that won't go away. But I swear, it's because of the boyfriend! I eat more because he eats more, I eat faster in case he eats all the food (hahah) and he eats a lot more stuff I wouldn't normally eat. I should go to the gym too, I'm just too lazy most of the time. (Note to self, go to gym soon)
I also saw Sunshine, and I LOVED IT! Isn't it weird? I'm glad I read a short review of it before I went, because otherwise I don't know how I would have reacted to what happens two thirds of the way through the movie. It was one of those movies that makes you think.
How is your job going? You didn't mention it but I thought you were quite happy with it so far. (Not like me, blehhhh, I need some changes at work).

p.s. I would have never heard of El Segundo if it weren't for that Tribe Called Quest song. What's it called? I Lost My Wallet in El Segundo?

I love that song :) El Segundo is a funny place. I just wish my commute wasn't so long, and I could spend the time at the gym! I worked out today, but I didn't get home until 8pm. I do yoga at home too. It's so hard not to put on weight when I eat with my boyfriend! I eat a lot more now. He's a great cook too. I'm trying to lose the weight!

I love my job. It's more management level than I've done before. I work with internal audit but I don't usually audit, with one exception. I did some SOX testing and it reminded me that I don't want to audit! My normal job is to coordinate SOX compliance, including working with our externals, Deloitte. It's nice to be on the other side. I work with our Latin American divisions in scope for SOX a lot, which is definitely one of my favorite parts of the job. What are you doing for work???