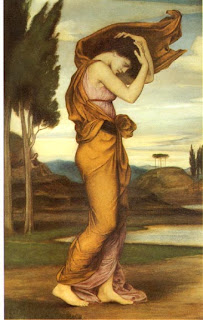 I’ve been reflective lately. I had another relationship end for the same reason they usually do, I got sick of being treated disrespectfully. He was well behaved in the beginning, and I really thought he was a nice guy, a catch even. When the insulting comments, dismissive attitude, sarcasm, and raising his voice at me started, I didn’t want to believe that he was the asshole he had hinted to me, even outright told me, he was. He went from emotionally confessing to me that he was afraid he would be abusive like his dad was, to screaming the accusation that I thought he was abusive, to it finally being clear to me that he was. It definitely escalated, but the red flags were there. Instead of taking them seriously, I made excuses for him- he was stressed about work and his family, he did realize that he was hurting me, he didn’t mean what he said, he was really trying to act better. Instead, it just got worse. He told me our fights were my fault, and I was causing him to act the way he was, and I believed him. I believed him until I realized that there was nothing I could do and no way to act to get him to treat me with respect. The harder I tried, the worse it got. Now I realize that you can’t get someone to treat you with respect who doesn’t respect you, no matter how hard you try. I’ve learned that the red flags, when put together, are a pattern. I don’t think I recognized what the pattern meant until I wrote it down and re-read what turned out to be a long list of red flags-

He-
is angry a lot
yells at the TV
gets way too angry about little things, or things that it doesn't make sense to get angry about
gets personally offended by things that have nothing to do with him
has disturbing road rage
yells "I'm not yelling" at you
doesn't have friends
doesn't want to meet your friends
acts different in public than in private
makes you feel guilty
makes little digs at you
is like Dr. Jekyll/Mr. Hyde, never know which one to expect
complains about other people a lot
doesn’t seem to have much good to say about women
passionately hates Hillary Clinton but loves Bill
likes to tell you about how other women did him wrong
wants you to pledge your undying love to him and swear you’ll never leave him
freaks out about how afraid he is that you’ll leave him after he acted badly, and you get so concerned about him and his insecurities that you forget about how he treated you
is paranoid
If you talk about yourself, steers the conversation back to him
is exhausting to be around
is self-righteous
is patronizing, talks to you like you’re stupid
What he says and what he does doesn't match (“You’re smart! I love you! I respect you!”)
says things that don't make sense
is passive-aggressive
yells at you if you disagree with him
makes accusations
says you said things you didn't
yells (at all)
does something wrong, and responds by telling you that you did something wrong
does something wrong and says you made him do it
is critical
puts you down
doesn’t respect your privacy
is needy
flames you
hangs up on you
says things he says later he didn't mean
acts hateful
won't leave you alone
puts you down to other people
acts like a jerk to other people
doesn't have impulse control
makes you uncomfortable
regularly makes you cry
When you cry he gets angry or uncomfortable (“You’re just trying to make me feel bad”)
accuses you of having PTSD just to get sympathy
confesses someone got a restraining order on him
talks about beating people up or fights he got into
likes to argue
spends his free time picking fights with people on the internet and looking up violent videos on youtube
tries to get you to watch violent videos with him
makes fun of your clothes/shoes/appearance
feels you up in public
is selfish in bed
says you stink
says you're indecisive
accuses you of doing things that he's doing
says he wants to hear your side and then repeatedly interrupts you and gets angry
contradicts you
throws personal things you told him back in your face
threatens you (at all)
says your problem is your ex-boyfriends, not him
accuses you of being abusive
is sarcastic
belittles you
mocks you
When you argue, tries to throw you out of the apartment you share and pay half the rent on
won't let you move your stuff in
won't let you have half the closet
insists on putting together the ikea furniture you bought even though you love putting together furniture
makes demands, tells you what to do instead of asking
wants to negotiate whenever you want something
When you try to talk to him about the relationship, he brings up a litany of complaints about you that he's never brought up before
changes the subject
degrades your contributions to the relationship
It has to be done his way
accuses you of thinking he's abusive and it makes him mad
tells you what your problem is
pulls guilt trips on you when he does something for you
does you a “favor”, then makes it clear he thinks you owe him
says he'll pay you back, but when you ask for the money he says you owe him money
thinks you should be grateful he's your boyfriend, and not question anything he does
won't compromise
doesn't try to work things out with you, just wants to win the argument
doesn't have sympathy for you
is cruel
His bad behavior escalates
gets mad when you do something that he does himself
It seems to get worse and worse
It’s black or white with him, no middle ground
seems to want to destroy your position, completely discredit what you have to say
There doesn’t seem to be any limits to how he acts or what he says
swore he wouldn't act that way again, and he does
The calmer you talk to him, the angrier he gets
lunges at you or towers over you when you disagree
says things specifically to hurt you
seems to misinterpret your words/intentions/actions, but when you try to clarify it doesn’t help
It’s almost like he is purposely mischaracterizing your words/intentions/actions so he can fight with you about it
is not the person you thought he was

You-
question his sanity
question your own sanity
are hurt by the way he acts
If you didn't love him you might not like him
are embarrassed by him
can't talk to him about money or politics or family without him getting mad
are always trying not to piss him off
try to change yourself to make him happy
don't feel right
don't feel like yourself
feel uneasy, and worried about what will happen next
are unhappy
don't tell your friends what's really going on
Nothing you do makes him happy
ask him what you need to do so that he’ll stop being mad at you, and he says you’re just saying that to get sympathy from him
would never treat him like that
are afraid of him
feel intimidated
make excuses for him
stay in the relationship because you feel obligated, you feel sorry for him, or you're worried what will happen to him if you leave
If he had acted like this when you first started dating, you never would have gotten involved with him

I started thinking differently about what happened after making that list. I wish I was exaggerating, because I’m embarrassed that I stayed for so long with someone who treated me that way and who is clearly an angry, anti-social, selfish person. I was concentrating on the good things, and dismissing the bad until it got too bad to ignore. I was forgiving. Instead of thinking about how he was hurting me and making life difficult for me, I was focusing on how obviously emotionally disturbed he was and how I thought I could help. He told me so often how I made his life better, he was so in love with me, we were perfect for each other, and how devastated he’d be if I left that I thought his angry and intimidating behavior wasn’t really him and didn’t reflect how he really felt. I was wrong.

I realize that I have ways of thinking that are not attracting me to healthy relationships. I think I have to earn respect, not that I deserve it. I think love is painful and self-sacrifice. I have a hard time recognizing and rejecting disrespect and abuse because it never seems as bad as what my dad or uncle did to me. I think I can handle it, without questioning whether I should. It does make me feel bad about myself though. It reinforces the feelings that I’m not good enough, that the way I’ve been treated is my fault and I don't deserve better. When I read that list, though, I recognize the type of person I was with, and the way he acted was not my responsibility. No one deserves to be treated like that. I got caught up in the blame game that I am so familiar with from my childhood- I’m mistreated, I’m told it’s my fault, I try everything I can to stop the abuse, nothing works and it just gets worse. What makes it worse is putting up with it at all. I thought that if I could have a good relationship it would prove to me that I wasn’t damaged, but I don’t believe I can get self-acceptance from someone else anymore. Love does not conquer all. It certainly shouldn’t feel the way it has for me. It feels a lot better to be single than to be in a relationship like that. Acceptance and respect are things I will find in myself.
Posted by Tealrat at 9:53 PM

Oh, girl. My heart sank, reading this list of scary things about this scary guy. When we had breakfast in Seattle (when was that - a year ago???), I had red flags about the guy from things you said, but knew you had to find your own way. Also, I had complete faith that you would. And you have. Give yourself lots of credit--I do. At 36 you may think a year or two is a long time to be in a bad relationship (maybe it is), but look around, some people NEVER make it out. There is better waiting for you when the time is right - cliche, but timing is everything.