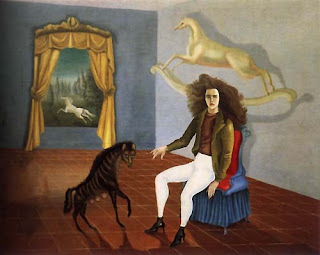 A couple weeks ago I got satellite TV hooked up at my new apartment. (I work for the company so I get it for free!) I have one of those receivers where I can record shows and watch them later (fast forwarding though the commercials for the non-PBS shows) which is heavenly for a political junkie like myself. My list of shows to record include The News Hour With Jim Lehrer, Nightly Business Report, BBC World News, Frontline, Washington Week, McLaughlin Group, Meet The Press, The Chris Matthews Show, and This Week With George Stephanopoulos. As you might imagine, I've watched a lot of analysis of Hillary Clinton's win in New Hampshire.

Personally, I agree that some of her "emotional" moments before the primary were a factor. I know that I was feeling very supportive of her after I heard about the men who yelled "Iron my shirts!" at her. She is treated differently, by political pundits and voters, because she's a woman. On the political shows, that discussion about how she has to be both tough and soft keeps coming up. It’s like she's supposed to be deodorant- tough like a man, but soft like a woman. Of course, her primary opponent, Barack Obama, has to deal with similar questions about whether he can appeal both to whites and blacks at the same time- do white people like him too much? If he "appeals" to black people, will white people get uncomfortable? Both Obama and Clinton are expected to walk the fine line between connecting with the disenfranchised and less politically powerful group they are a part of, while not freaking out the majority. (White men are not the majority, of course, but they are in politics.)

Hillary has been accused of playing the "victim card", a criticism that is almost impossible to avoid when you are part of a victimized group. The worst thing you can do in our society is be seen as a victim. This is a huge part of the shame and stigma of being victimized- you don't seem to deserve any sympathy or understanding in our culture. It's as if you are supposed to go away until you've worked out all the anger, sadness, and grief that is a normal reaction to an attack on your dignity and sense of self, and not come back until you've "fixed" yourself and can properly take your place in the status quo. It's really frustrating when you feel you can't express your feelings and the pain of your experiences AND be accepted by our society. People don't like angry women, angry black people, angry gay people, angry rape victims, etc. It turns people off. Expressing anger is the quickest way to lose sympathy.

This has been a huge struggle for me, because I learned a number of lessons from being a kid who was not taken care of within my family, and had adults outside my family turn their back on me when they knew about the abuse. I learned to keep my mouth shut, because complaining only reflected badly on me and made people uncomfortable. I learned sympathy is conditional on "pulling yourself up by your bootstraps" and proving yourself worthy of support. You don't generally get it prior to all the work you have to do to make up for being disadvantaged. Everyone loves a success story. They just don't want to be on the hook for making it happen. A story about a foster kid or homeless kid getting through school and making something of themselves just wouldn't tug at the heartstrings in the same way if as a society we were committed to the idea that all children should be protected, educated, and have opportunities.

This is where I start to feel uncomfortable with myself, and just how bitter I am. I hate being bitter, but that's what happened after years of suppressing my anger. I learned to be the good little victim to survive. As a kid, guilt and pity were pretty much my only playing cards with adults, and they held very little power. I can give numerous example of times when adults knew what was happening and didn't live up to their responsibilities to me, from the therapist who told me that I was being abused but didn't report it (as is required by law), to the teachers who encouraged me to drop out of school rather than trying to help me when I was put in foster care, to the police who dropped the case against my dad and great-uncle despite having all the physical evidence they could possibly need. When I got angry I caught hell for it, and the message I got from the way I was treated is that what happened to me was my fault and my problem, and relying on help from anyone else was just going to lead to disappointment. It's the American way! Only losers need help. Keep it in the family! Just because you're a kid doesn't mean you get special treatment, you leech on society! Look pretty, don't laugh too loud, don’t challenge people, and don't ever let anyone know how different you are. Just try to fit in!

What does this have to do with the presidential nominee, you may ask. We have a long way to go in this country before women, minorities, and other disenfranchised groups are treated fairly, and I think it has a lot to do with how we silence people. "Victims" don't truly have a voice, because the victim narrative is very limited. You can talk about how you triumphed despite adversity. You can talk about how well you fit in despite your differences, how you're just as good as anyone else. You don't talk about how you feel- that you're angry or hurt or depressed. You don't talk about how the system or society or other people failed you. Somehow that means you're not taking responsibility for yourself, which implies that we do continue to blame the victim. Holding anyone else responsible is not allowed. You can play the good little victim, but you'll be criticized for that as well. We expect people who have been victimized to either rejoin society by suppressing their pain and experiences, or be rejected and have your victimization paraded around and mocked.

I find this frustrating because I see examples how unsympathetic our society can be all the time. The biggest frustration I feel now, though, is how I've internalized these pressures. I do feel separate, and different, and alone even though I know I have support and friends and power in my life as an adult. I don't feel like a victim anymore, and I can't be hurt the way I was when I was so venerable. I have a voice, but I feel conflicted. I'm not supposed to be angry, I think, because that part of my life is over, but I am angry. Who I was back then is still part of who I am now. I suffered a lot of loss, and I still feel that I can only rely on myself. The idea of getting too close to people is uncomfortable, because depending on someone else or trusting someone else feels like I'm setting myself up to get hurt.

I don't want to be perceived as an angry, bitter, accusatory person, because I see myself as a happy, friendly, open person. The reality is much more complicated. I feel a lot of things, and who I am and my experiences cannot be packaged into some role, like the "pulled herself up by her bootstraps, creative and charming survivor" or the "angry feminist" or the "sad little damaged victim". I've tried to do it to myself, both in an attempt to control how others saw me and to distance myself from the pain of feeling betrayed and rejected. It has often been an exercise in self-hatred, because the only explanation that made sense to me at the time was that what was done to me was my fault, just like everyone was telling me. I rejected myself more severely than anyone else could. I fragmented myself into those roles, and self-acceptance means giving a voice to all of me. No one can be understood as a role, we are all complicated people no matter what groups we belong to, but our experiences as members of groups are part of who we are, I think. The ultimate pain is denying who we are.
Posted by Tealrat at 11:24 AM