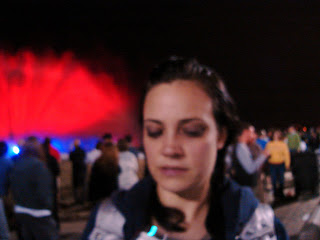 It's been a rough 5 months- my rat Jay-Z died, and then I got depressed first about Jay-Z, then about the possibility that Ulysses could soon be next, and then the anniversary of my brother's death. I felt like I was really, full-on grieving, which was a good thing (I guess). Depression is part of the grieving process, or so they say, but I was always afraid to let myself go through the depression because didn't want to get suicidal or lose myself in it. After growing up with my mom, who is clinically depressed and deals with it through denial (she can't even talk about my brother's death, or really acknowledge what happened in our family) and of course witnessing my brother's slide into oblivion, it's hard for me to believe that I could let myself get depressed, work through it and get better. In other words, depression can be emotionally healthy. Not an easy concept for me, but I tried my best to go with it and have faith I would come out the other side stronger and more grounded for it.

I also had things in my life that helped me keep external perspective and not get overwhelmed with my internal grappling. I have my job, which I still love and it keeps me busy. Writing was a struggle because I was so self-absorbed, but my weekly writing class kept me writing a little, even if I didn't feel it was blog-ready. I saw my psychologist at least once a week, and counted on her to step in if I ever started to lose touch with reality (the slide). My friends were always there for me, and since I live by myself my apartment is my sanctuary, my safe place where I have control and can hide out when it gets to be too much. My apartment is also a good gauge of how I'm doing- for those of you who have struggled with depression; you've probably experience how difficult it can be to keep up on basic chores like doing dishes and cleaning the bathroom. The longer the depression went on, the more my apartment resembled the female version of a bachelor pad. (Most bachelor pads aren't dotted with Hello Kitty and stuffed animals though.) I can actually have people over now, so things are looking up!

My real salvation during this time has been hockey. I'm happy when I play (as my Cheshire Cat grin on the ice testifies too) and some weeks I was only happy when I was on the ice. I try to practice during the week as much as possible, which makes the Friday night games a lot easier, and my skating has improved pretty dramatically. I can actually skate backwards during a game now, and pivot, and play defense a little. (Not that I’m good at defense. But I can do a decent job of it.) Hockey keeps me in my body and in touch with myself, and I love the linear, straightforward relationship between what I put into it and what I get out. I practice, I get better. The more I play, the more I improve. Hockey rewards me for my efforts, unlike some areas of my life where the more crap I go through the worse things seem to get (i.e. dating, my relationship with my parents, some of my previous jobs). There are lots of other reasons I love it too- it's fun, exciting, the women I play with are amazing, I feel tough and strong when I play, it's fast, I could go on and on. Even though it feels like I've spend the last 5 months moping around my apartment and traveling (getting sick of that!), a lot has been going on. I will write more about these things later (I take requests), but in the meantime here's an spine-tingling synopsis-

June 11- Trevor Linden officially retired (this has triggered a whole grief process of its own) (btw, he’s my favorite hockey player)
June 12- On my way to my writing class after work, got a funny feeling and went home to spend time with my rats
June 13 (Friday the 13th)- Woke up to find Jay-Z dead, Tim Russert died, scored my first goal in a game that night
June 19- Had a panic attack trying to drive to writing class
June 20- Got my first assist
June 21- Buried Jay-Z at a pet cemetery in Calabasas
June 22-25 Went to San Francisco for manager training
June 26- Had another panic attack driving to writing class
June 29- Got 2 baby boy rats, Chuck D and Jason (named after Jason and the Argonauts)

July 4- Went to Santa Monica pier with my fantastic friend for the 4th of July, which was the anniversary of the last time I saw my brother alive (11 years ago)
July 7-10 Traveled to Phoenix, AZ for an inventory count. I know there are hotter places- Death Valley, Saudi Arabia, Hell, but Phoenix is damn hot!
July 25- Scored my second goal, second assist, and first penalty (interference minor 2 minutes) all in one game
July 30-Aug 1 Traveled to Fresno, CA for another inventory count

Aug 17-22 Went to Denver to conduct SOX training (missed the DNC by one week, our team missed the Lady Kings playoffs by one point)
Aug 26- Anniversary of Jeff's death

Sept 19- First Lady Kings game of the new season
Sept 27-Oct 1 Traveled to Tumwater, WA for yet another inventory count

In summary, hockey, travel, death.
Posted by Tealrat at 9:22 AM

It's amazing what hockey can do for us and mean to us, isn't it? That's why I got the tattoo. I've had people think it is silly that I have a hockey tattoo and comment that I'll end up regretting it when I'm older. But hockey has been life-changing for me and has been my comfort at times (despite the burnout from league politics over the recent year).
BTW, my mom's iguana is up at that pet cemetary. Isn't it a cool place (in a sad but celebratory sort of way)?

Hey Kristina. Good post. I know what you mean about the apartment. When I'm really down you can find little coocoons of clean surrounded by crap. Good luck with your depression and I'm glad it sounds like it's getting better. Sometimes the only way out is through. Love you!

Yeah, I couldn't even watch hockey for a while after my brother died because it reminded me of my life before it happened, but now that I have it back it really keeps me going.

I do really like that pet cemetary. It's sad but so sweet and touching. I'm glad there's a place like that I can go to see Jay-Z's grave. It's so peaceful.

Hey transplanted, I miss you!

I love how your pets are named after either rappers or greek heroes. I gotta learn how to play hockey... I just don't think asians belong on ice. Hope things are going well with you!

:) I got the Greek heroes thing from the woman I got Ulysses and Jay-Z from (all her rats- females only, have Greek names) and the rapper thing is new. When Jay-Z died, I decided to carry on the tradition with Chuck D. It works for him.

I play hockey with lots of Asian women! The high scorer on my team is Asian. Three women that play on another team call themselves "the rice line". Too funny. But yeah, are there any Asian men in the NHL? I don't think I've seen any.

Tangentially, a surprising number of women are actually shorter than me (5 foot 2 inches). Go figure. Does not affect how tough they are, that's for sure.

Saw Tracy Johnson (Blessing) the other day in Trader Joe's in Ventura. She mentioned that you are living in L.A. I would love to see you and hear how you are these days. Send me an e-mail if you get a chance to christycrow72@gmail.com

I'm sorry to hear about Jay-Z. I love the bad ass hockey photos. I can totally imagine you as a hockey player - like soccer but ten thousand times more bad ass.

I'm glad to hear that you are working with your depression, although it sounds like hell.

Hope to hear from you
love,