Why am I getting hockey books from around the country? 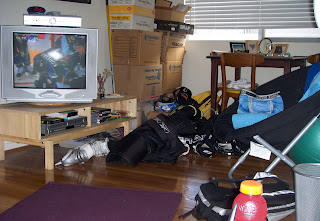 Hello from my messy apartment. I've been sick (again! jeez) with the same sinus-throat-stomach thing I get every couple months since I moved down to L.A. I don't know if it's the smog or I just have not gotten used to the weather. When I was an undergraduate at University of Washington I used to have allergies and stomach problems so bad I could barely make it through class, even while I was all hopped up on non-drowsy Sudafed, but when I came back for grad school I didn't have allergies at all. I guess my body just gets used to all the (organic and non-organic) crap in the air. That's kind of scary actually. When you live in L.A. you get so used to the smog that you may forget about it until you leave town, and then flying back into LAX you descend into the yellow filmy mess. Disturbing.

I don't have a lot to say about Christmas (family flashback nightmare) and New Year's Eve (my brother's birthday) except I got through it and it's done. I did get some very sweet and wonderful presents (thanks everyone!). (I was told in my writing class that all my parentheses are annoying. It's my thing! Get over it.) Last week, I went to my PO box, and I had a smallish book sized package from Brick, New Jersey. I also had a key for locker in the post office, and a notice that they had a package for me behind the counter. The one behind the counter was from Roseburg, Oregon. The package in the locker was from Blaine, Washington. I was bemused. I sat in my car and opened them in the order I received them. The first one was Original Six: True Stories from Hockey’s Classic Era by multiple people (6, actually). The second was The Best Game You Can Name by Dave Bidini. The third was Tropic of Hockey by Dave Bidini. The packing slips were from different book stores with no clue who they were from. I suspected my friend who lives in Birmingham, Alabama. She told me she was sending me her favorite hockey book a while ago. I just figured it would be one book. I also received two copies of The Huffington Post Complete Guide to Blogging, thanks to Amazon's faulty wish list technology. I like the book so much I don't mind. I have a copy in my bedroom and one in the living room, so it's always close at hand. Now I can also sprinkle hockey books in every corner of my apartment, so I will never be far from the wisdom and wit of the world's greatest sport.

I decided over the holidays that I love my apartment and never want to move. It's perfect for me- quiet (usually), close enough to work and halfway in between the two ice rinks I go to the most, hardwood floors (carpet in rentals is usually totally gross), no crazy neighbors (except the homeless guys in the alley who occasionally drink too much and yell for hours or throw up next to my car), and, best of all, small enough that I can stand in the hall and see into all the rooms (so I can be assured that rapists are not lurking in the other room) but big enough for my hockey gear and all the unpacked boxes I still have in most of the corners of my place. I have lived here for a year and a month now, and I still haven't unpacked all my stuff that was packed up for me in Seattle. I seem to have a mental block about it. Or an emotional block, take your pick. Every time I try to psychoanalyze myself to try to locate the cause of my inability to unpack fully, I get really tired and have to lie down. I asked a psychic in Seattle about it while I was visiting last September, and she said there might be mixed feelings and weird mojo trapped in the boxes that I don't want to deal with, like Pandora's Box. She said when I felt ready, I could make opening them a ritual, and burn incense or use the ringing of a bell to purify the boxes. It seemed like a good idea at the time, but I guess I'm still not ready because I haven't come any closer to unpacking the boxes. I did go through about half of the boxes of clothes I haven’t worn since moving, but then I stopped just before Christmas and haven't made any progress since.

On the up side, I finally washed all my dishes, unclogged my bathroom sink, made 3 gluten and dairy-free pies (that I get all to myself because no one else likes gluten and dairy-free baked goods but I have no choice but to like them or never eat pie again), and I finally got my California CPA license. I figured it would be a miracle if I had it before the end of 2008 since I sent in my application (and payment) in April and the California board spent 8 months finding fault with the way my forms were filled out, strategically setting aside my application in a closet somewhere without telling me why periodically. I actually got my CPA right before Christmas, so it was a Christmas miracle! They are all miracles, really. So, in summary, my holiday season was miraculous.
Posted by Tealrat at 2:34 PM

I wish I could claim responsibility for the hockey books, but I cannot.
I also use a lot of parentheses (but I stop myself if they get out of control). And I would totally eat some gluten-free, dairy-free pie! I once bought a gluten-free cookie at a coffee shop, and the barista warned me sternly "You know...there's no wheat in that." It was almost like the time I ordered a vegetarian sandwich in Fort Worth (the lady kept asking me if I realized that it didn't have meat in it. Oh, here I go with parentheses again.)

Oh, you are so fabulous. What a crappy Christmas and what a great attitude. One of the high lights of my holiday was talking to you on New Year's Day. That totally made me feel better. I love the image of "sprinkling" hockey books.