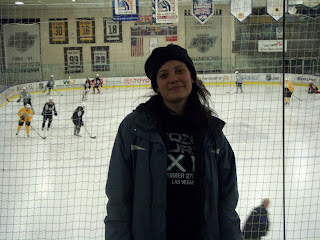 I started "twittering" this week. Twitter is kind of like a blog, only you are limited to 140 characters. This keeps you to 1-3 sentences, so the idea is that you update it more often than you might a blog with clever little musings throughout your day. It is a lot like the status on Facebook, and you can even connect the two so when you post on Twitter it also shows up in your Facebook status, AND you can post updates by sending a text message on your cell phone. Also like Facebook, you can follow your friend's twitterings, which show up on your Twitter homepage. (I am tealrat on Twitter so you can look me up if you're on there.)

I'm trying to focus on blogging more regularly, and twittering during the week. This has been difficult for me lately because I've been feeling irritable, resentful, and angry. I don't like writing when I feel like that. It doesn't make me feel too good about myself, and I certainly don't like to share my crabby with other people. I like myself better when I'm fun and uplifting. I don't like to be a downer. I’m manic pixie dream girl! (This is from a funny story on NPR about one of the many female stereotypes that show up regularly in movies- the irreverent kooky spontaneous girl who lifts the overly serious guy out of his self-absorbed rut. This term was coined in reference to Kirsten Dunst’s character in Elizabethtown. Think also of Natalie Portman in Garden State, Melanie Griffith in Something Wild, and Holly Golightly from Breakfast at Tiffany’s (Audrey Hepburn). The problem with manic pixie dream girls, as the website referenced above so diplomatically points out, is that they are marked by the "lack of an inner life". It’s hard to maintain a real life (with a job), acknowledge your own problems, and generally be a real person who is not happy all the time, while trying to keep up a free-spirited, charming naïveté about life and amusing everyone around you. Believe me, I’ve tried. There’s a reason “manic” is usually paired with “depressive”. Maybe Kirsten Dunst in Crazy/Beautiful is slightly more realistic. Slightly.)

I'm trying to figure out a happy medium between dealing with my feelings and wallowing in them, and on the other hand, between keeping a positive attitude and being in denial. It's good that I'm working through unresolved crap from my past, not so good when I start feeling distrustful and suspicious in regards to my life now. I would like to make some kind of New Year’s resolution to not be bitter, but how can I do that and be sure that I won't just go back to suppressing any feelings I have that are distasteful and negative?

I don't like anger, but anger is really just the tip of a huge betrayal iceberg. I could live with the anger at my parents if I could just let go of all the seething resentment towards the people that I felt could have helped (or just paid attention) and turned their back on me. My parents are just two people- I know who they are and I never have to trust them again. I hate the feeling that I will struggle to trust anyone (or anything) for the rest of my life. Friends, situations, my job, money- I'm always waiting for the bottom to drop out from under me. I hate feeling this way. I was starting to feel more confident about the life I have now and that I might finally be ready to accept my brother's death, and then my co-worker committed suicide and I started questioning everything all over again. You just never really know what's going to happen, who people are, and what they might do. Other people can live with that uncertainty. Sometimes people surprise you in positive ways. I have too much awareness of how things can go wrong. I can usually focus on the "glass half full" but right now I'm in the empty.

This is why I’m trying to blog more, even twitter. One of the happiest surprises of my blogging experience has been the support and warmth I have received through this blog. It gives me hope, both that I will work though this and not get stuck in depression forever, and that there are a lot of people, friends and well-wishers, who are there for me and understand, and who won’t turn away. Who listen and sympathize. I really appreciate that. Especially when I am feeling crabby and mad, I suspect that I should be quarantined until I can be sweet and pleasant to be around again, but people still read my blog. I don’t ever feel alone.
Posted by Tealrat at 10:12 PM

A comment on my own post- found this (self-described) rant on "amazing girls" i.e. the manic pixie dream girl. It's super long (especially if you read the comments) but an interesting rank nevertheless. I may have to write more about the mpdg or ag myself in some later post- http://thepetitesophisticate.blogspot.com/2007/12/soapbox.html

There's a line from a song that goes something like: "I'll never change all my colors for you."

One of the many things about your blog that I'm grateful for is that you don't hide or change your colors....which gives me the courage to do the same.

I've gained HUGE insights about myself because you are so candid about whatever you're experiencing or feeling in the moment.