It's cold here, I swear 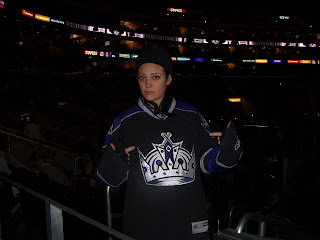 I feel like I could stop talking for the rest of the year. I am sure of it. I mean, I can talk at work about work, but I have somehow lost the ability to make small talk. I can talk about hockey just fine as long as it’s just about hockey.

About a month ago, I was playing in a pick-up game and I was knocked out. The puck got loose in front of the other team's net, and I was about to shoot it when I saw a hunter green jersey coming at me out of the corner of my eye, and then I was lying flat on my back. The goalie was asking me if I was okay, but the lights seemed too bright and all I could think about was closing my eyes and taking a nap. There were voices around me but they seemed very far away, like I was listening to the TV while dozing on the couch. I thought about the green jersey, how white the rink looked before I closed my eyes, how my head hurt but I was still grateful to my helmet even though I did not remember when it hit the ice. It was surprisingly comfortable at that moment lying there, and I felt safe with the black cage protecting my face and my head resting against the padding. I could feel the hard, flat surface of the ice under me, the padding around my body, and the stiffness of my skates around my ankles. I was in a hockey cocoon.

People were saying my name and telling me to open my eyes, and I did not want to worry anyone, so I opened my eyes a little. It was less bright since the people looking down on me were blocking the lights. I could see the goalie to the right watching me, and I wondered how I had spun around so my head was facing the boards behind the net. People were asking me those stock questions- what's your name, where are you, how many fingers am I holding up? I felt kind of stupid actually answering those kinds of questions, but there were so many vague thoughts swirling around in my head that I was trying to grab on to, mostly to stop them from bouncing around in my brain, that it took some time for me to find the answer and then figure out how to verbalize it. Of course, I know my own name, but so did they and it was a lot of effort for me to repeat it back to them. I could remember driving to the rink, but it took a while to remember the name of the city I was in. I didn't have any problem counting the number of fingers; it just took a moment to remember the word "five".

They helped me up and I slowly skated to the bench, trying not to fall down. I pulled off my gloves and helmet. My head was throbbing so acutely that I could not really think of anything else. I heard green jersey yell from across the ice “sorry” in a sarcastic way, like when you’re apologizing for something you don’t really feel is your fault, or that the person deserved anyway. Her voice floated to the back of my brain, where my head had hit the ice, and stayed there. Almost everyone besides her stopped by the bench periodically to ask how I was doing. I went back to talking in sentences, and explained I had better stay on the bench for the rest of the game. My friend Carrie, who I carpooled with, asked if I wanted her to drive me home, but I said, no, finish the game, I’ll just sit here on the bench and rest. As the throbbing lessened and turned into an ache in my head and neck, the white glare of the lights flickered around me and I started feeling lightheaded and sick to my stomach. I diverted my attention from how I was feeling by watching the game, and talking to the people who came to the bench to rest.

A word about pick-up games- there are no referees and you don’t keep score. They are kind of a combination of practice and an actual game. It’s an opportunity to practice skills and positions in a game situation without the pressure of winning and losing. The pick-up games I play in are Monday nights, and half the people going that week wear a white jersey and the other half wear black. (I'm always on white for some reason.) We start out with five people on each side and everyone else on the bench, and when you get tired, you go to the bench and someone takes your spot. This means someone who would normally play wing can end up on defense or center, and defensemen can play offense. Sometimes there are a lot of beginners, and the beauty of these games is you can make mistakes and do things you wouldn’t normally do in a game, like play a position you’re not comfortable with or try a different shooting technique, and it doesn’t matter. (Shooting can make you especially vulnerable because you have to shift your weight to power your shot so you’re off balance.) In summary, its friends having fun, you avoid hurting anyone, and if you get caught up in the adrenaline or competition and accidentally trip, high stick, check, knock down or even come close to hurting someone, most of the women cannot apologize enough. In fact, most of the women playing that night were totally apologetic and coming over to check on me during the game (including the people on the other team) EXCEPT the one who leveled me.

It wasn’t until I had to be helped off the ice, Carrie had to put on my shoes for me and drive me home, and I was lying in bed that I started to feel pissed off. I’ve only had one other concussion, and it was much worse both in circumstances and effects, but since this has been the year of working through unresolved feelings from the past I got angry about that too. I mean, what happened during the game was crap. I wasn't expecting to be played that hard at a pick-up, I was off balance, and she was trying to knock me down instead of trying to play the puck or my stick. And it was especially crappy to be so unapologetic about it. But, everyone else was really concerned about me, and her and her friend were frozen out in the locker room afterwards. It was obvious that no one else approved of the way she was acting. I didn't get anywhere near that kind of sympathy when my dad beat me. That terror has never left me, though. I thought I was going to die. I lost language that time too. Constructing sentences, especially, but pronouncing words too. Communication was a struggle, including expressing emotion. I was in shock for a while after escaping from my family, and with everything that happened to me I couldn’t even let myself feel what I was feeling, let alone say it.

That Wednesday I had planned to play in a game with the LA Chill, a women’s tournament team, vs. the USC women’s team. As the game got closer I started to feel nervous, even a little terrified. What if it happened again? My neck had stiffened up the next day, and I found myself absentmindedly massaging the sore spots trying to rub out the stiffness and thinking about how some of my friends said they saw my head snap back and my eyes flutter when I hit the ice, things I don’t remember. It’s terrible that I don’t remember. Just before the game I felt like I was going to throw up, although part of that was that I’d never played with the Chill before. My former teammate on the Blue Lady Kings was playing center, and we were on the same line. I realized that she had assisted on all my goals so far. My nerves calmed when I got on the ice, though. In the last Lady Kings season, she had been trying to work out a move with me and the other wing where she pretended to go behind the opposing team’s net, but then kicked back the puck on that same side. We didn’t even talk about it before the game, but she did it, I was there, and I put it in. Less than a minute later we did it again. I was a little shocked. It was definitely the first time I’d scored twice.

My line tried really hard to get me a hat trick, and it seemed like the puck was flying towards me every second I was on the ice, but so were USC. We did win the game, though. Quite convincingly, as a matter of fact. On Friday I played my Blue Lady Kings games, and scored two goals again. So it was the worst and best week of my hockey career so far.
Posted by Tealrat at 10:45 PM