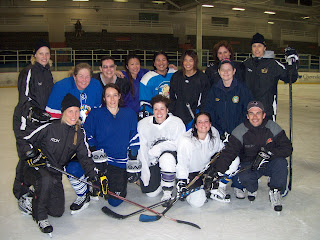 It's been a good day. I worked all day setting up SOX training for this year (in El Segundo starting next week, will be traveling to Denver and New York the week of June 22.) Got home in time to see my beloved Vancouver Canucks beat the Chicago Blackhawks with their methodical game. (I recorded it so I could watch the whole thing.) I like the Blackhawks, but I love the Canucks. Devotion. Transcendent joy when I see them. It's true love for sure. While following the Detroit Red Wings-Anaheim Ducks game, I finished washing my dishes and scrubbed my bathtub. These were all major accomplishments- months of depression has not been good for my concentration at work, the cleanliness of my apartment, or my writing. I'm starting to see the light at the end of the tunnel though. The NHL playoffs might actually have something to do with that. They excite and energize me. It seems weird, but I guess we wouldn't be into sports if they didn't make us feel good. They give me a welcome break, or escape more like, from my mind numbing internally-focused struggles.

I cleaned the bathtub so I could soak in Epsom salt. I sprained/stressed something in my leg Sunday, maybe a tendon in my lower leg. Two weekends ago, I did the Maria Rooth hockey camp- 2 days, 3 hours of ice time and 3 hours of off-ice instruction each day. It was amazing, especially for my skating, but stressed my body. I'm not the only one to get injured after attending the camp. We were all so sore we could barely move for a couple days afterwards. I don't remember ever being that sore before. And I am not that young anymore! 37, baby. On Sunday I was playing in a game, but my lower right leg was hurting more and more, with no relief while I sat on the bench. Finally I was dragging my leg around because I couldn't put any weight on it while skating, and it hurt like hell, so I sat out the rest of the game. That was painful. Even more painful, I'm trying to stay off it until my game on Friday, so no Monday night pick-up, no Wednesday morning lesson, no co-ed game on Thursday night. Sigh. It will be worth it if I can play without pain on Friday, our Lady Kings team's summer season opener. (Go Blue!) So I've been RICE-ing, as my friend calls it- rest, icing, compression, and elevation. I'm told the Epsom salt bath helps too.

As my last little twitter indicated, I was listening to the Ducks beat the Red Wings, and SWEATING. I sweat a lot while playing hockey, like it drips off my face, into my eyes, down my back. I'm kind of used to it by now. I sweat while I sleep too. This sweating felt a little different though. Detoxifying. I got a headache too. That could have been from stewing in hot water, but I get detox headaches pretty easy. I was also thinking DEEP thoughts about something my co-worker said to me today. She is from Pittsburgh, and is a Penguins fan. She wants the Ducks to win the Western Conference (and the Penguins to win the East of course) so she can see the Pens play in Anaheim. So she asks me why I'm not rooting for the Ducks so I can go see playoff Canucks in person. I said, well, because I don't like the Ducks. I don't exactly hate them (not like the Rangers, or even the Ducks announcers- "The Ducks are the hottest team in the playoffs!" Oh please.) But I don't like Pronger, Niedermayer, or Getzlaf (and especially his shaft. I mean his stick, of course.) I don't really like any of the Ducks except their goalie, Jonas Hiller. He's been amazing in the playoffs. I'm not a Red Wings fan, but I like a lot of their players. I respect them. A lot. They are a powerhouse. The Ducks can't stay out of the penalty box and are just irritating.

But she has a point. (My Kings friends are groaning.) I don't want the Red Wings to win. They are a threat to my Canucks, and they beat the Penguins last year and then stole Marian Hossa from them. That's just mean. Of course my Kings friends would never forgive me if I cheered for the Ducks, especially Tai, who hates the Ducks like I hate the Rangers. And we are already at odds over the Washington Capitals-Pittsburgh Penguins series. Hey, I respect the Caps and Ovie too, but that's nothing compared to my fondness for Sidney and Marc-Andre. And the Pens have Satan playing for them. Satan. How could I not love them.

So, the question before me (and you) is this- since I love the Canucks more than I hate the Ducks, could I betray the L.A. Kings and root for their mortal enemy the Ducks (who I really DON'T like at all) for the chance to see the Canucks live in the playoffs? It's your classic "the ends justify the means" vs. "it's the principle of the matter" argument. What do you think?
Posted by Tealrat at 10:55 PM