I'll stop the world and melt with you 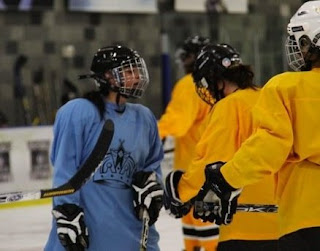 A couple night ago, I had a dream that I was making out with a guy in a NY Rangers jersey. Of all the weird, cryptic dreams I've had, this one was especially difficult to interrupt. I still haven't figured it out. Some options:

A) I'm lonely, and really only interested in guys who like hockey, but my misgivings about the opposite sex are reflected in the guy wearing the jersey of the NHL team I hate the most.

B) I've been reading hockey blogs, many written by people on the East Coast. I usually follow West Coast teams, but I probably know more about the east this year than I ever have thanks to all the team previews I've been reading. (I've been sick and lying on the couch a lot lately. More about that later.) So in the dream I'm symbolically embracing (ha! I crack myself up) the Eastern Conference. Speaking of, my favorite blog posts of recent history have been The Two-Line Pass Eastern and Western Conference previews, in haiku. Call me crazy, but I thought these were pretty good. Seriously, the haiku form seems to make everything sound poetic.

C) Why is there so much positive buzz about the Philadelphia Flyers this season? Last season, they took dumb penalties and started fights that turned the momentum...against them. How is getting Chris Pronger from the Anaheim Ducks gonna change that? I don't get it.

D) My subconscious has forgiven the Rangers for beating my Vancouver Canucks in the 1994 Stanley Cup Final.

E) Random pairing of during-sleep hornyness and my obsession with hockey.

I don't know what the right answer is, but it's not D.

I'm on somewhat of a health kick right now, or I'm back to the one I used to be on before I moved to LA. It started a couple weeks ago when I went to bed early enough to get 8.5 hours of sleep, yet woke up with dark, dark circles under my eyes and feeling like death warmed over. This is not an uncommon occurrence. This is depression for me- not so much thinking bad things, but feeling like hell. Feeling groggy, and numb, and empty inside. Disconnected. It just seems pointless to even go to bed, because I'll feel awful when I wake up no matter what. This is why I play so much hockey. It's the only time I feel 100% good (mind, body, and soul), and one of the rare times that I feel in the present. I have had games where I had some flashbacks and got distracted (not a good thing when people are flying at you) and it's not as fun playing when you're sick, but usually when I'm playing I feel in the moment, in the real world instead of in my head, and ALIVE. But my especially bad morning was a precursor to getting sick, which I have been since then. The worst part of it is that it's in my lungs and throat, making it hard for me to breathe very well. I've still been playing, but I skipped pick-up last week and went a whole five days without hockey (playing).

Another thing that happened is that I've gotten the chance to play center. My Lady Kings team lost our superstar forward, and we are short on centers. We've been short on players, period. We're lucky to have two lines. The first two games of the season we only had one center, so I was the second center. It is really, really fun. I love it because you really get to be part of the action almost all the time. You are either getting the puck or supporting the puck, usually, and you really have to be aware of where everyone on your team and the other team is. On defense, you need to pick up the third man or anyone trying to sneak in front of your net. On offense, it is usually up to you to bring the puck up and get a play going. You have to be able to switch from offense to defense, and back to offense as quickly as possible. Of the forwards, you are most responsible for backchecking and covering the defense when needed.

It is so exciting, but so exhausting. This is a big motivation for me to get healthier as well. It takes so much stamina to play center. I love chasing someone down who's trying to get a breakaway, but I am just dying afterwards. All the changing direction and sprinting is insane. I can't hold back, either. I have to go nuts out there or it's just not as satisfying. Hockey is not a stroll down the block. Of course right now this is especially hard because I'm sick and my lung capacity is diminished, and I keep having coughing fits on the bench in between periods. I am really looking forward to getting over this cold. I am actually in pain, heaving after shifts. (I did go to the doctor, and got tested for strep throat. That was negative, and I'm not coughing up green or yellow stuff, so it's just a cold and not something more serious.) I did play center in my Culver men's league as well, for 1 and a third games. (I say men's because there is only four women total in the league, and with 8 teams, this doesn't seem like enough to qualify for co-ed.) I thought I did pretty good the first game as center. I got an assist, was passing well, and was blocking shots like crazy. Unfortunately, one of those, a slap shot from the blue line, hit me in the ankle and bruised me pretty bad. It possibly bruised the ligament in my ankle, so I was icing that for a while.

Also, unfortunately, I was feeling really bad in our last Culver game, and I only lasted one period at center. Hopefully I will get another crack at it, because that was one of my worst games. I felt slow as molasses. Plus, they get on me about being slow at the face-offs. I am trying to get better, and practicing at it, but I don't do well with having someone get on my case during a game. I like feedback because then I know what to work on, but when it starts to feel like I'm being pressured in a negative way I get so nervous and lose confidence, and I start to do worse. I do much better with encouragement and constructive criticism. If I feel like someone is disappointed in me I just get discouraged.

Some people have told me that they are motivated by the "tough love" approach and being yelled at when they do something wrong, but not me. The kind of environment I do well in is supportive, encouraging, and very social with very specific feedback. I'm one of those team player types. If I have people around me who believe in me, and I understand what I need to do to succeed, I have the confidence to go all out for the sake of the team. I guess one of the hardest thing for me about playing center is that you are kind of the center of attention sometimes, and it feels like more pressure and like I'm disappointing my team more if I play poorly. (It seems funny to say that I don't like being the center of attention because I am such a ham, but I'm mostly just trying to entertain people and make them laugh, not make them think I'm awesome. I'm a geek and I know it.) On the flip side, I know that I can help out my team when I work on my skills and skate hard, so I can get my teammates the puck, and get us opportunities to score. I feel challenged and motivated to really push myself this season. I have a lot to work on- face-offs, skating better, stops, starts, and changing direction quickly, controlling and protecting the puck, etc. etc. It's an exciting start to my fall/winter season of playing hockey, which is greatly enhanced by my enthusiasm for the start of the NHL season.

Best news ever- I get free satellite TV from my company. (I'm not saying their name because I know they monitor what blogs are saying about them, but their logo is blue and swirly.) The employee package is very good, but for the first time this year the NHL package is included! Yay! Last year I paid for it, and it was worth every penny, but I'm super happy to be getting it for free. Bonus! I have a whole life philosophy that revolves around free stuff (bonuses) that I developed while I was on the streets and looking for ways to keep positive. I'll have to share it with you sometime.
Posted by Tealrat at 7:51 PM

Email ThisBlogThis!Share to TwitterShare to FacebookShare to Pinterest
Labels: depression and guilt, food and health, hockey, photos, relationships, the streets

Watch the Ref's hand on the faceoffs. When he drops, you sweep your stick out (forward) and back (you are trying to win it to the backhand side normally).

It is harder when you are short because you have to look up to see the refs hand.

I do win the occasional faceoff, but my reflexes and hand-eye are just not that great. Maybe I should go back to playing video games.

That whole "tough love" thing is the reason I have an intense aversion to team sports. I equate playing sports with being humiliated and yelled at. Fun for some people, but not fun for me!

I'm very interested in this life philosophy about free stuff. I could use some free stuff. And some way to keep positive. :P

Everyone is excited about the Flyers because I live in Philly now. Why don't you come see me and I'll treat us to a game?