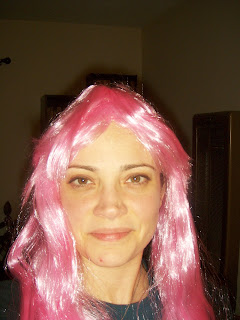 Before Halloween I discovered that the drugstore down the street was selling wigs for under $5. I don't know if it's because of the recession and they thought people wouldn't be spending on Halloween this year, but everything was heavily discounted for weeks before Halloween. Whatever the reason, I stocked up on crazy wigs. I got a pink, blue, and purple one. I used the purple one for my Halloween costume, Nymphadora Tonks. I realized that this year was a bountiful one for wearing geeky costumes. I was Rin Tohsaka and anime Alice from Resident Evil for the Anime Expo, Elektra for Comic Con, and then Tonks from Harry Potter. I even bought a sewing machine because I needed one for costumes. I'm hoping all this dress-up and going to conventions is increasing my geek cred.

Also, this picture is evidence of how my face has been breaking out lately, which should really be worth some hockey cred since it's from my new helmet. My helmet is great because it actually fits. My old one was too big, so anytime someone hit me in the face during a game, which was like, all the time, the helmet would shift and I'd be struggling with the cage trying to get the chin rest back on my chin with my hands in gloves so I couldn't just hook my fingers around the cage to move it, and all this is going on during a game and I couldn't see very well because the helmet is over my eyes...you get the picture. So the new helmet is wonderful because it stays on my face, but because it is so snug I am also getting all pimply on my chin and forehead. It's for hockey, so it's worth it.

In other geek news, I discovered my new favorite Facebook game- Tiny Dungeons and Dragons. It's a lot like the real D&D, except, this is the great part, no Dungeon Master who doesn't like girls playing. That was my problem when D&D first got popular. It was after the boys in my neighborhood decided I had cooties and didn't want me playing with them. But thanks to Tiny D&D, I am free to create female adventurers with armor and gauntlets and a sword for each hand, and adventure my heart out. Since I am having so much fun making up for lost time, and since I found the game because a boy, that is, a man sent me an invitation to it, I suppose I can forgive the boys who wouldn't let me play with them way back then. I am so enamored with my level 7 Elf Ranger I can't even tell you. I am already planning for my next female character with much enthusiasm.

I've needed the distraction because I've been pretty miserable lately. For one, I've been sick. No, it's not the swine flu. It's some sinus-y, coughing, having a hard time breathing, headache-y kind of thing. It started way back in the beginning of October and has just been lingering on, especially the cough. The worst was when I was too sick to play hockey. It made me all depressed. I am finally able to breath during games again. I had what seemed like a lot of games where I was struggling to get enough air, and spending my time on the bench heaving and hoping I wouldn't pass out. My Culver team, bless them, would look over at me while I was hacking my lungs out on the bench and say, "What's your problem?" Then after the game, while I was bent over the garbage can dry heaving, one of the guys would say, "Are you sick or something?" You could just feel the love.

I'm still coughing, sneezing, and tired, but playing has got easier. I feel pretty normal out there, if slightly more winded when I get to the bench. I keep taking all these cold medicines because I'm afraid I'll get a sinus infection like I did two years ago. I had to take antibiotics which completely messes up my stomach. All the over-the-counter medicine is bad enough on my touchy system. My friend recommended using a Neti Pot. So, I don't know if you've tried this, but it's this strange plastic teapot-looking thing. Strange because the spout looks like a penis. I mean, it does. So you put this saline/salt stuff in it, and warm water, and stick it in your nose and tilt your head to the side. The water is suppose to pour through your sinuses and out your other nostril. Of course when I did it, the salt water ran down my throat; I gagged; bubbles came out my nose and I drooled on my shirt. Then I walked around my apartment with snot and saline water on my shirt, sneezing bubbles and cursing the Neti Pot. This is one of the many reasons why I am glad I live alone.

The real problem in my life, and probably the reason I have been physically sick for so long because of all the stress, is that I am having a lot of PTSD symptoms. Specifically, nightmares and anxiety. I don't really remember the actual content of my nightmares, but I wake up periodically throughout the night, sweating and terrified. Sometimes when I wake up I am convinced I heard someone in my apartment, but I'm too scared to go look (and still half asleep) and then I just fall back into the scary dream. I wake up anxious and frightened. It's hard to reassure myself that it was just a nightmare even after I wake up, probably because they aren't just nightmares, they're flashbacks. I'm reliving the terrors of my childhood. I wake up feeling the way I did as a kid, vulnerable and alone. That loneliness carries through, is the link between then and now. When I was a child, being alone was terrifying because I couldn't survive without a basic level of care and sympathy from adults. As an adult, it just feels like I mostly have to carry this burden alone because a lot people don't understand what it is like to be an adult survivor of abuse, to have PSTD, and just the fact that I am trying to live in the present while being haunted by my past at the same time. I feel like I live in two worlds.

As I keep reminding myself, and my therapist keeps reminding me, the reason these feelings are coming up now is that I do feel safe, safe enough to let this come to the surface and deal with it. I feel like myself as a child is living in my subconscious, fighting monsters, and my adult, conscious mind is trying to be supportive, not get in my way and try to keep this from playing out, not interfere but still help, and not let that battle in my subconscious bleed into my current life and distort it too much. In other words, realize that a lot of what I am feeling is connected to the past, even if it is triggered by things in my present. There are always going to be triggers, and I'll never pass through these feelings unless I just feel them. The conscious mind wants so much to connect them to something. When I feel fear, my mind wants to find something to be afraid of now. When I'm angry, I want to be angry at something I can direct my anger at. I don't want to just feel angry that things happened that I can't do anything about. And I don't want to feel sad at all, but waves of sadness pass over me and I just have to let them. I just have to keep reminding myself that I have to feel this. There is no other way.

One of the strangest, hard to explain feelings is anger towards yourself that you weren't able to protect yourself. It doesn't really matter how irrational that feeling is, you can always tell yourself that you could have done this or that differently, and maybe it wouldn't have happened that way. You could have been smarter, more clever, could have fought back more, could have tried harder not to zone out and somehow you could have found superhuman strength or the right thing to say to make it all stop. It really, really sucks to feel like a victim, because you feel helpless. Helpless leads to hopeless, and you can't survive hopeless. Your mind will do anything to avoid feeling helpless.

I think that's a big part of the appeal of fantasy. If you can imagine yourself as an adventurer, a warrior, a hero in your own life, you can protect yourself from that feeling. In D&D, you win some and you lose some. Some of it is the luck of the draw (or roll), some of it is the armor you've found or otherwise acquired, the weapons, your experience, your resilience, and your own particular strengths and weaknesses. Sometimes you barely get out alive, but you always need time to recuperate. It also helps to think of the resources (or lack thereof) I had as a child, and how I was up against a monster like my dad, with far more experience, strength, and a lizard-y hide I couldn't hope to match. It was like sending a first level Eladrin with no armor or weapon in against a Level 5 Hobgoblin. The Eladrin may be intelligent, but she's screwed. (I'm a D&D neophyte, so don't expect me to know what I'm talking about.)

As I'm arming up my Tiny D&D character and sending her on level-appropriate adventures, I'm trying to arm up that kid inside me that's fighting ghosts on my behalf. And I'm trying to remember that this is normal, at least normal for someone with PTSD. This is not easy stuff I am trying to deal with. Another thing that's kind of comforting about thinking of yourself as an adventurer is that adventurers are often alone. You meet people along the way, you may travel with others, and people help you, but sometimes you do have to enter the evil forest and find your way out on your own. I just wish the evil forest would let me sleep. I told my therapist I was having insomnia, and when she asked me why I said I didn't know. Then I told her about the nightmares, and she seemed pretty surprised that it didn't occur to me that the fear of nightmares might be what's making it hard for me to go to sleep. Go figure.
Posted by Tealrat at 10:41 PM

This post is really meaningful for me because just yesterday I did a google search for "dealing with feelings" hoping to get some insights...and now Kristina comes through again with profound insights written as only she can. Thank you.

it must be the guinness. been reading some of your old blogs, understand the being a child and being an adult at the same time. think u have had more pain than me , but glad ur trying to survive. oddly at a hot scene in LA story,. sorry for your loss of brother. dont understand but lost dad at 10. not so internet savy. and lackadaisical in my blog...life is quantam

thanks for your words..it helps that there is someone out there who is dealing with similar stuff,
best jason

Thanks you guys. I am very glad this is meaningful and not incoherent ramblings. :)