You know I'm no good 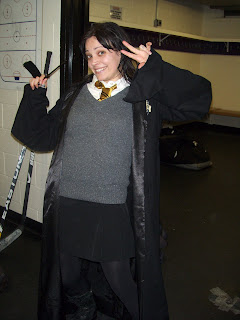 The other day I saw a segment on the News Hour about Iraqi war veterans struggling with PTSD. When the man they interviewed talked about his symptoms, and somehow, the way he talked about, I was really struck by how familiar it sounded. Kind of how, last January, I saw an interview with a man in Gaza during the war? Israeli military offensive. While he was talking about being in a hospital while it was bombed, a bomb hit close by, and the look in his eyes seemed so familiar. Terror, panic, lack of comprehension, not being able to take it all in, resignation, helplessness, anger. It's the look of someone who's body, every cell in their body, is telling, screaming at them hysterically to run, but their brain is telling them there's no point, no way to escape it. Somehow, this man who is back in the United States is experiencing those feelings that are like what this man is feeling with bombs dropping next to him in Gaza, and I'm watching on TV and thinking I understand how they feel because I thought my dad would kill me back when I was a kid. PTSD is strange that way. We are all human, and we are animals, and we have limited ways of coping with overwhelming terror and horror.

Our survival instincts and strategies for processing psychological trauma are built into the primitive parts of our brains. So as someone who experienced abuse, rape, and the suicide of someone I was strongly bonded with, I can end up with the same mental disorder as war veterans, torture victims, people who lived in war zones, hurricane and other natural disaster survivors, people who lived through car and airplane accidents, victims of violent crime, kidnapping, terrorism, etc. The cause doesn't necessarily have to be comparable, although they do have the fear of your own destruction or witnessing someone else's in common. It is somewhat comforting to know that what I'm experiencing is "normal", not just for abuse survivors, but all sorts of other survivors as well. It is less comforting to think of how much of this violence is caused by other humans, and how we so often ignore the psychological costs of war, domestic violence, rape, and other trauma and terror.

After the report, there was a discussion about military men and women coming back from Iraq and Afghanistan with PTSD. One of the people in the discussion suggested that we shouldn't think about this as a mental illness, rather, like an injury such as a broken leg that can heal and the person can fully recover. She kept talking about these warriors who get injured in battle, and they need to be acknowledged as wounded warriors, not mentally ill. I get her point, in theory PTSD can be temporary until the person can process the trauma. That is one way to deal with the stigma of mental illness, just deny that PTSD is a mental illness. But PTSD is a mental illness, the symptoms are things like depression, anxiety, nightmares, flashbacks, memory disturbances, suicidal behavior, and the treatments are psychology-based, including therapy, antidepressants, and anti-anxiety drugs. The man in the report even says that it's not like breaking your leg, because your leg is put in a cast and in six weeks you're all better. His wife talks about how he tries to go off his medication and things get bad again, and although she doesn't identify the medication, she's says it "takes the edge off" and I'm assuming its an antidepressant, or maybe an anti-anxiety drug.

Of course I'm not against people in the military thinking of their comrades with PTSD as "wounded warriors", just like I don't have a problem with people preferring "survivor" to "victim" (although I prefer victim because I think we need to get it through our heads that if someone victimizes you it doesn't make you bad. I don't think the word victim should have bad connotations because the whole point of the word is that something bad was done to you, so the negative connotations lie with the person who victimized you, not you. But I understand that "survivor" sounds more empowering. I think it would be more empowering, though, if society didn't make it a practice to blame the victim. The whole point of the word is that it's not the victim's fault!) It just seems like kind of a slap in the face to all the mental health professionals, people with PTSD, and others who have fought to get PTSD recognized as a mental illness and are working on treatments and support to then deny that it is a mental illness. That kind of feeds into the stigma. I also don't like the idea of separating the PTSD that war veterans experience from the PTSD that anyone not in the military might have. People in the military are not mindless killing machines, they are human beings just like the rest of us, who are asked to survive conditions that most of us can't imagine, on our behalf. I know I can't imagine what it would be like to see people killed in front of you and know you could be blown apart at any time, and then have to go from the horror and violence of war to "normal" life. Of course that would be overwhelmingly traumatic. Just like it would be for anyone.

Suddenly I don't know where I'm going with this, except to say that it kind of amazes me that PTSD is largely the same disorder regardless of how you got it. Also, my battlefield has mostly been intimate relationships, so no wonder I have so many problems with them. I have been marveling this week on how much self-hatred I harbor in my poor, conflicted heart. Other people can tell me, and I can tell myself over and over that my dad didn't abuse me because I'm worthless, my mom didn't not protect me because I wasn't good enough, my great-uncle didn't sexually abuse me because I'm only good for sex, and my brother didn't kill himself because I was a selfish and lousy sister, but it just doesn't sink it to the level where I believe those things, truly. I still don't think I deserve consideration for my feelings, sensitivity, and respect. Somehow, it feels good to admit to myself that I still feel that way. My conscious, adult brain knows it's not true. My conscious mind is like the beach, and my subconscious is the entire ocean, lapping up on the shore, coming up completely in my dreams, which are full of fear and conflict. The guilt and grief feels overwhelming, yet not hostile. It's just there, keeping my toes wet during the day and washing over me at night. I sit on the sand, day after day, waiting to unite with the part of me that's a mermaid.

From Neil Gaiman on twitter (neilhimself)- The Patti Smith Group - Because The Night - 1978.
Posted by Tealrat at 11:18 PM