My thighs are not amused 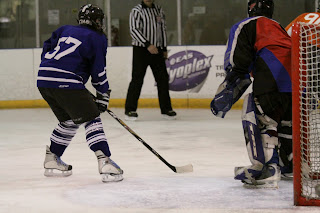 I have returned to hockey! I played in my team's season opener last Sunday. Yes, I am way out of shape. First my ankles started hurting, and then my thighs just threw in the towel. At some point, I was saying, "go legs, go!" and my thighs were saying, "I refuse to participate, at least in any meaningful way." My thighs talk all fancy.

Finally, the muscles around my knees were crying out in pain. But, not my knee injury. That knee felt fine, at least until I left the ice. It felt a little sore that night, along with my hips, stomach, back, shoulders, and arms. My hips and arms are still sore.

So I got some helpful feedback from that game- I am out of shape. This is not surprising, since I hadn't played since January 23. Some other feedback- my knee is going to be okay. I will be back to where I was pretty quickly, I think. Well, maybe I don't want to be where I was. When I looked at the pictures our team photographer, awesome cheerleader, and all-around fantastic friend Anne took, I was somewhat surprised by how BAD my hockey stance is. I mean, I knew I hunched over, but I really hunch over. I could see from the pictures how I am doing myself no favors trying to skate efficiently like that, and trying to use my stick effectively with my shoulders up around my ears and my chest sunken in. At the Maria Rooth clinic they told us to "be proud" and hold our chest high when skating (and bend your knees. Everyone tells you to bend your knees.) I used to have really bad posture all the time. I made a conscious effort to stop slouching and did get better, but now I need to do that with hockey.

Conscious effort works well for me. I do my best when I put my mind to something and just focus on it. It works even for things that seem impossible, like getting from high school drop-out on the streets to CPA. Keeping the focus and patience are the biggest challenges. My goals usually take time, and it can be hard to keep your eyes on the prize, so to speak, when your current situation seems nearly unbearable, completely chaotic, or confusing. Getting from point A to point B is even harder when you can't even conceptualize what point B should even look like. For instance, even though I believe in myself and my ability to take on challenges, I think about my brother and it seems I'm never going to get over his death. I feel so conflicted, and guilty, and how could I ever accept what happened? It seems wrong, like I'm condoning something that never should have happened. His death will always be wrong, and I don't know how to just live with it without feeling torn apart inside. Similarly, I struggle with finding some peace with my childhood and my family, because I'm still raging against the moral wrongness of how I was treated. It feels like I'm giving up and conceding defeat if I try to move on from it, somehow. It's something I'm talking to my therapist about, because I am so conflicted and don't know how to work it out. It seems like I'm just punishing myself because I have all this outrage and no where to direct it.

In other words, the challenge I usually run up against is sustaining my focus on goals that usually come with some type of internal conflict. I struggled all through college and grad school, and still do, with the idea that I was selling out, abandoning "my people" on the streets, people who were fucked over by their families and by society, like I was. I feel guilty that maybe, in looking for stability and safety, I'm buying into some bullshit societal brainwashing on what being successful means. That I'm giving in to a system that abused me, victimized me, blamed me for what it did to me, and then abandoned me. It seems like something is missing if I'm not raging against something, and since I don't have much to rage against (except some vague concept like "the machine" or maybe later in life, the dying of the light) I'm usually raging against myself and my own choices.

Change does come, though. It is often so subtle and gradual that I don't even notice it for a while and I'm surprised when I realize how much things have changed. It happens to me in practice all the time- I can barely do something, or just totally can't, and it feels completely unnatural, then I realize I'm doing it without a problem. Not that long ago I was really struggling with anxiety at work. I felt overwhelmed. I didn't feel like I was getting enough done each day, and that I was perpetually behind in everything, with more work piling on every second. I started carrying around a notebook with my to-do list. When I write things down in the list, it kind of takes some of the stress of it out of my mind. I guess a lot of my stress was thinking I would forget things I needed to do, and not knowing what all was out there. I couldn't prioritize because I didn't know what I needed to get done. Even with something as simple as keeping a to-do list, I felt a little conflicted, like I was giving in to some goofy self-help technique, some self-proclaimed time management guru says I should keep this detailed to-do list and review it every day and I'm buying this silly crap when the real problem is that my boss is giving me more work that any reasonable person could handle! You can probably imagine that with that level of internal rebellion I have a hard time getting anything done without a huge struggle. I still feel stressed and sometimes anxious with all I'm doing at work, but it seems a lot more manageable now. I can see, from the things crossed out on my list, that I am getting things done each day. I'm more organized, and I think people I work with can tell I'm more on top of things. It didn't all change the second I decided to get more organized and use the list, but my anxiety has gone down and my work has improved.

Hockey does come with some conflicting feelings since it involves other people and the dramas that invariably crop up, but for the most part hockey is the most unambiguous part of my life. It's pretty easy to set a goal that I will improve my skating posture. It gives me something to focus on while I deal with the slight amount of fear I have of getting injured again and the rebellion and pain in my muscles while I get back in shape. I suppose I could set a goal that I will be less internally conflicted, but who even knows what that would mean. I don't want to stop being who I am, and it's hard to unpack my defiance from how I think about myself. The even larger issue is that of survival. My rebellion, anger, not giving in to my parents, some core of myself that I refused to compromise, kept me alive and psychologically intact through all the trauma. I didn't go crazy, and I kept a strong sense of myself. You don't just let go of an identity that literally saved your life. I am so aware, every time I think of what I went through and what happened to my brother, that I could have lost my mind and I could have died. So how do you let go of that? Making peace with my past seems impossible. Along with a lot of other impossible things that usually turn out not to be impossible. Just challenging.
Posted by Tealrat at 11:28 PM

Butt Down, Chest High is really a way to picture putting your body weight directly over your skate blades.

Also, if you don't mind my suggestion, wide tracking is keeping your feet too far apart as you glide. This will making you lose speed and then making your muscles work very hard to keep up.

(did you ever watch those videos?)

Try some easy lunges to build up those thigh muscles :)