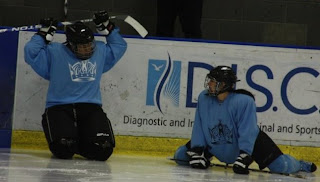 Do you remember, waaaay back in March of 2006 when I sent letters to my dad's second wife and her son (who was living with them with his 4 year old daughter) warning them about my dad? Maybe not. Well, I was completely terrified at the time, thinking (quite seriously, even though I knew it was unlikely) that my dad would come to Seattle, find me, and kill me. At the same time, my right shoulder started hurting very badly, to the point where I could barely lift my arm. This wasn't the first time I'd had shoulder problems, far from it. I had pain and limited movement in that shoulder since I was 17 and my dad threw me against a wall, flinging me by my right arm. The ongoing discomfort was something I just lived with, just like many of the struggles I had accepted as just a normal part of my life even though they would not be normal for most people. Periodically, I went to doctors and tried to get some help with the anxiety, sleep problems, migraines, digestive distress, flashbacks, panic attacks, etc. Sometimes the doctors tried to help out in small ways, some were dismissive, and some just didn't seem to get it. My shoulder pain has a clear physical cause (yet it wasn't treated), and the other problems are symptoms of PTSD. It wasn't until recently that I started finding doctors and other professionals who acknowledged PTSD as an actual disorder that could be treated.

As a physical therapist who frequently treats chronic shoulder pain, I find the primary issue is poor positioning of the shoulder blades at rest which sets up poor movement of them when the arms are working away from the body. I’ve found this also feeds down to the elbows contributing to tennis and golfers elbow. I’ve just written a self-help book about this if you’re interested. I wish you the best, sounds like you've been through a lot, and please feel free to contact me if you have any questions or if your PT isn't able to help with your shoulder pain.
Rick Olderman