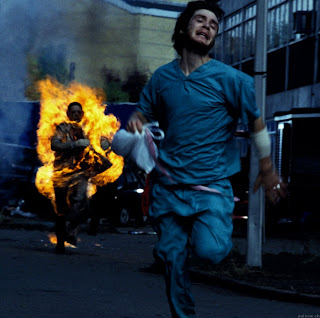 Man am I sore. I go to a trainer in the morning, and he likes the "fail" technique. That is, he wants to work my muscles until they fail. My muscles don't usually fail though. Usually they are burning so bad I give up, which doesn't dissuade him. He just tells me to get back into it. For example, this morning he had me doing squat sits with my back against the wall, holding 10 of them, then 50 reps. Then I did lunges, again holding 10, 50 reps, then the same thing on the other leg. He's also big on form, so he has me adjust so that it's just as difficult to do as possible. Oh, and then I finish off with a couple hundred crunches. Ha, not really. Just one hundred. This morning I was shaking after the lunges, and the rest of the day my legs and butt hurt. Of course this is what I am paying for. If I wasn't exhausted I'd feel like I was wasting my money. He knows how to motivate me too. He says, "You're a hockey player, aren't you? Aren't you supposed to be tough?" Hockey players have got to be the easiest people to mess with. It doesn't take much to push our buttons.

I told my trainer I wanted to be stronger for hockey, which is true. The stronger my leg, butt, and stomach muscles are, the better and longer I can skate. I also want more upper body strength so it's harder to push me off the puck. Honestly though, my biggest physical goal right now is to lose weight. Me, and like, everyone. I'm completely aggravated by how much weight I've put on in the last couple years. I gained about 5 pounds when I moved to L.A., but that was 4 years ago. When I tore my MCL playing hockey almost 2 years ago, I put on another 10 pounds in the 4 months I couldn't play. Over the next year I put on another 10 pounds. Ugh. Losing wight is so hard. The extra weight feels like my clutter/hoarding problem and all the emotional processing I still have to do. I'm dragging around a bunch of extra stuff that I don't want or need, but letting it go is work. I'm good at hiding the extra weight kind of like how I'm good at seeming like I'm handling the trauma well. It makes life easier, but it can also mean you tolerate things that you know you shouldn't because you're skating by. Not that gaining 25 pounds is really a crisis, but I feel pretty overwhelmed by the swimming in clutter thing and my crazy emotional dream life. I guess dredging through my emotional baggage takes time though. Not to be rushed.

I would like to rush some of these weight loss though. It's frustrating. I feel like a lump. It takes effort just to keep from gaining more, let alone actually losing more than a couple pounds. I'm even considering running. Some people at my work started an L.A. Marathon club. I've been going to their meetings because they talk about fitness, nutrition, and losing weight, but every time someone asks me if I'm running the marathon I say, "NOOOOO." Running for fun is not my thing. I like team sports. That's my thing. I did realized something though. Being able to run long distances would be very helpful in the zombie apocalypse. Of course it depends on what you think zombies would be like. It's the most important debate in modern horror- are zombies fast or slow? Personally, I like the fast zombies. I figure anything that can reanimate flesh would make said flesh pretty bad ass. I do like the slow, relentless, mob style zombies too. That would be where endurance comes in. Really, running would be handy with either. I'm not being facetious. When I was a kid, we didn't even have the internet. We didn't have cell phones. We listened to music on cassette tapes. Screw ups happen every day. Our water is full of prescription drugs, milk is full of hormones, meat is full of diseases. Who knows what could happen? We're a lot closer to zombies than vampires or werewolves. Yeah, I said it. Zombies over vampires. Vampires are cool and all, but zombies are coming. Fiction vs non-fiction. Think about it.

Not that I'm actually planning to run the entire L.A. Marathon next March. I still think the idea of me running 26+ miles is, uh, unlikely. But I'll do some training, and maybe I'll develop a taste for it. Who knows, it might help me lose some weight and feel better. Maybe I can run away from some of my problems.