All the Lamp Lighting You Can Handle 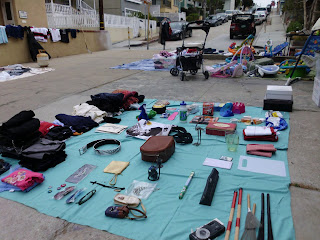 I hadn't had a yard sale in a while, although I guess that is a Pacific Northwest term- here it's a garage sale? It was more like a parking lot sale or a sidewalk sale. I made $200 off crap that was going to Goodwill anyway. I was only able to stomach a yard sale because I had some kind of emotional epiphany right before the anniversary of my brother's death. I was able to let him go. I realized I was holding myself back and holding him back, and while I knew he didn't want me to be paralyzed with grief, it was even more motivating to me that I could be holding him back from moving on to the afterworld.

What I experienced was acceptance, for the first time. Accepting his death made it possible for me to let him go, and then made it possible for me to let a lot more go. I am a borderline hoarder. I discovered recently that I can really relate to the people in those hoarding reality shows on TV. I put a lot of emotions into my stuff, so getting rid of it is not so easy. It involves uncomfortable feelings, feelings that are hard for me to tolerate. But letting go of my brother is helping me let go of all sorts of stuff I've been collecting- clothes, shoes, books, toys, do-dads, yacky wacks, flippity flaps, etc. It's surprisingly time consuming to get rid of stuff though. The yard sale was a good way to clear out a bunch of things, including my brother's snare drum, which I didn't think I'd ever be able to let go of. I am still listing things on eBay and taking regular trips to Goodwill. I have an ungodly amount of papers to go through. There's important papers, uh, important business papers, in there with 100 pounds of other random papers. I keep a lot, especially as a writer, I have tons of slips of paper with ideas for poems, blog posts, stories, etc. I used to really struggle with letting go of things that seemed to represent something about myself. It was like my identity was so shaky I needed physical items to remind me of who I was. Now I look at things and think, that's not me. I don't need it. 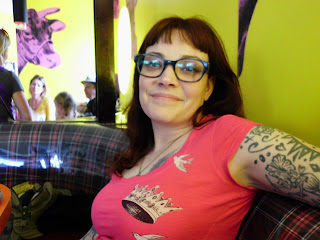 I've also been making changes to get away from things I used to include in my identity but don't think really belong there anymore. I dyed my hair red. Having black hair felt like part of who I was, and I had dark hair for a long time, but I still feel like myself with red hair. I also switched hockey teams. I had been on the Blue Lady Kings since I started playing hockey (7 seasons, or 3-1/2 years ago). This season I moved to the Red Lady Kings. And again, still myself! Ultimately I want to clear out everything unnecessary so I can focus on what is important to me.

Also, with the acceptance I started working on the back tattoo piece I have been planning to do for my brother for the last fourteen years. I don't think I could start it until I had reconciled myself to the fact that he was dead. Now there's no turning back- Jeff's death date is tattooed on the back of my neck now. We are still working on the outlining, but it's about half done. The design my tattoo artist came up with is amazing. It is of Lisa and Maggie Simpson (my brother's and my favorite characters from the Simpsons), but the composition really tells a story about losing him. The border is a poem by Lucille Clifton called "Speaking of Loss". I knew that back tattooing was painful, but parts of it have been almost unbearable. It has been the worst physical pain I've ever experienced. My brother's suicide was the worst emotional pain I've ever experienced, so that seems appropriate. 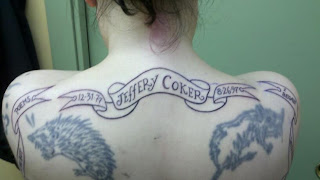