Well. What can I say? Obviously, I'm crushed that my Canucks lost the Stanley Cup in game 7. I've got nothing against the Bruins. I like Timmy Thomas, Milan Lucic, and Zdeno Chara. The last time the Bruins won the Stanley Cup was the year I was born. But after waiting 17 years for the Canucks to make the final again, all the bandwagon Canuck haters, the Keith Ballard defensive musical chairs, the brilliant team play, the not so brilliant play, Ryan Kesler's consistent amazingness, the hope, the expectation, the blue and green in my veins, it's a bitter pill to swallow that we made it that far only to lose in game 7. It wasn't even a good game. The Canucks looked tired and nervous the whole game. There were a lot of injuries. It was a long run. 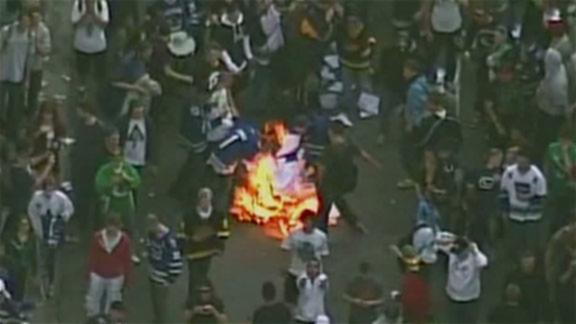 Then there was the riots in Vancouver. The thing that annoys me the most about these, though, is the Vancouver police's claim that it was caused by a small group of anarchists. Really. Anarchists decided it would further their political aims to riot after a sports game? In my days as a punk rocker, I knew some anarchists, and the subject of sports never came up. I never heard any anarchist or punk express any interest in sports whatsoever. For one thing, none of us had televisions, or money to go to games. For another, I mean, jocks and anarchists? No. Not a lot of crossover there. Anarchists protesting a WTO meeting- okay, that works. Anarchists protesting the Canucks losing the Stanley Cup- give me a break. Anarchists dressed like frat boys in Canucks jerseys? Yeah, because that makes a lot more sense then hockey fans getting violent.

I'm a little touchy about this because I'm so sick of people using socialist as an insult. Anarchy and socialism are very different political philosophies,of course, but I find it really damaging when politicians are only expressing very narrow political views, and if you say something that doesn't conform to the ideas of the time, or are just outside the political norm, you're radical, unpatriotic, liberal, socialist, whatever. Anarchists, well they're just one of those groups we can blame the ills of society on. As someone who feels out of the mainstream, I find this name calling very offensive. It should not be a bad thing that people have different perspectives and different political beliefs. We live in a free society, and being free to see society differently is part of that. Rioting after a hockey game- not an expression of political beliefs. It's just drunk boneheads taking advantage of an opportunity to be destructive. Don't blame anarchists. I doubt many of those people could explain what anarchy as a political philosophy is. But maybe I'm wrong. So if you're a Canuck anarchist rioter, I would love to hear what you were hoping to accomplish last night. Let me know.
Posted by Tealrat at 9:02 PM

Email ThisBlogThis!Share to TwitterShare to FacebookShare to Pinterest
Labels: hockey, the streets

I think it's easier for people to think it was "those crazy Anarchists" than their own sports-loving college kids. It's been like that since high school, so I guess I'm not too surprised that it doesn't change. I feel ya though! I may look like a corporate whore, but I'm still a punk rock girl! hehe.