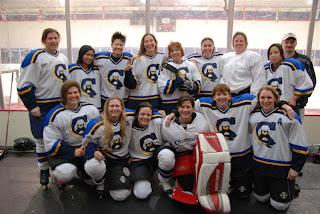 Yes, I am in this photo but the other women can distract you from me, who I'm sure you are sick of just like I am, and I am posting a picture of other people on my blog but not actually writing about them so it's okay. I don't sound too neurotic, do I?
(The Chill in Phoenix, May 24, 2009)

I think about stuff to blog about every day, but my writers block lately is me. I'm sick of writing about me. This is kind of a challenge since my blog is about me. I could write about people besides me, but I feel sort of ethically weird writing about other people, especially people who might read my blog. Not that I want to rail against people I know, I just don't want to gossip about my friends on the internet. It seems not so right, a good way to alienate people, and would make me resemble a character on the TV show 90210. I'm not morally opposed to declaring that show is even stupider than the original, so I would like to avoid resembling it in any way.

I'm just generally tired of myself and my problems. This hasn't been helpful in trying to find a PTSD doctor. The bigger problem is that all the people recommended to me don't take my health insurance. I didn't think my insurance was so crappy, but apparently you have to be independently wealthy to get mental health services in this town. I am so fed up with dealing with the PTSD every day that I don't have the energy or desire to spend my free time calling doctors from my insurance's website and trying to figure out if they have any idea how to help me. This is starting to remind me of when I was living in San Francisco and my stomach, migraine, and anxiety problems were, like, MAJOR, and I went to all these doctors who were supposed to know something about this kind of thing, and none of them could help me. (Except a homeopathic doctor, who was trying to treat my migraines and ended up fixing my thyroid, which had a lump in it. I was really impressed when the stuff he gave me totally got rid of the lump, and so was he, considering it wasn't supposed to do THAT.) So I ended up taking matters into my own hands, read a bunch of alternative medicine books, figured out that by cutting dairy out of my diet the migraines almost totally went away, which lessened the stomach and anxiety problems considerably. Recently I thought that maybe a good idea would be for me to actually read and use all the PTSD books and workbooks I have. and I totally intend to, it's just that I am too tired and tired of the PTSD and tired of the inner workings of my emotionally damaged brain to motivate myself to do that right now. Blah.

If only hockey was a treatment for PTSD.

I think it's helping me at least keep my head above water, but I could just be thinking that because I am a total hockey addict. It does get me out of my head which seems to help. Not just because it is physical, but also because it is so social. and maybe even because it is a lot of other people's drama, which gives me a break from my own. I feel bad admitting that I find distraction in other people's problems. I dislike that aspect of sleazy talk shows. It is different in that I am also participating and sharing my own difficulties, and I empathize with my friends and don't look down on them. So I hope it's not the same. It's just nice to focus some of my attention on other people. I was in Phoenix last weekend for a hockey tournament, and I spend the whole time with my wonderful hockey friends- playing, cheering for friends on other teams, driving (really slow, since they are HARDCORE about the speed limits there), eating, sleeping (I had 2 roommates), getting carbon monoxide poisoning- good times. Exhausting, and now I am sick with a cold, but so totally worth it and I mentally feel a lot better having that break from my "normal" life.

I'm even starting to like guys again. I feel bad admitting that too- that I was not feeling so great about the male gender. I hate feeling that way. I am not at all comfortable with stereotyping groups of people, and very critical of myself when I do that. It's not that I changed any of my basic beliefs. I still think that there are good people and bad people and almost 100% of people are shades of grey regardless of gender, and the only difference is what you're able to get away with and what you choose to and are interested in getting away with depending on the social standing of the various groups and circles you're a part of, and you're own moral compass. My co-ed team seems to have a lot to do with my growing comfort level with that other gender. Kind of funny since it's not like my team is entirely made up of well-behaved gentlemen (not surprising since it's a HOCKEY team). All the fighting and stick-throwing temper tantrums aside, most of the guys are really pretty nice, funny, and good humored, and almost excessively apologetic when I am taken out or "JFK'ed" (my teammate managed to hit me in the head with his shot after I was ran into and knocked down by another teammate, followed by 2 defenders from the other team falling on me- good times.) Most of all the guy who got me on the team, who's response whenever I ask him if he regrets getting me on the team since I am by far the suckiest player and I am convinced the center who keeps running into me would love to have me off his line, is something along the lines of- yes, you suck but not that bad for someone who's only been playing for a year. I asked you to be on the team because I thought it would help you get better and you will and its just for fun anyway so don't worry about it. HONESTY. I like that in a man.
Posted by Tealrat at 8:40 PM