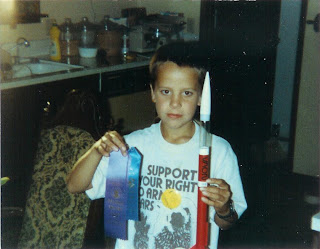 I started a Facebook page for my brother. The idea very simply came from two of my deceased Facebook friends who still have pages- a co-worker who committed suicide in 2008, and a woman I know from business school who died from Cystic Fibrosis last year. My brother died before Facebook, and before social networking and a lot of things for that matter. He never used an iPod or iPhone, or even a cell phone. He died before multi player online video games, Google, Wikipedia, Barack Obama (at least before we knew about him), Lost, the Simpsons Movie, digital cameras, GPS, blogging. I mean, I'm sure some of these things were in the works, but there is all this technology that is such a normal part of life now that he never even experienced. Not to mention all the things in my life that I'm not able to share with him- my job, playing hockey, my friends, my boyfriend, zombies, blogging, rats. I feel a tinge of sadness whenever something happens that I want to tell him about. I got a garbage goal and a sweet assist on Sunday. I'm playing in a hockey tournament in Phoenix this weekend. My boyfriend is awesome. My rats are silly. Obviously the Facebook page I set up for him is not the same as it being HIS page that he set up, but if other people can have a Facebook maintained in their honor that people can use to keep connected to their memory, I don't see why he can't have one. Even though he never knew what Facebook was.

I have been thinking of him even more than usual because in the EMDR therapy (and my regular therapy since those two therapists are talking to each other and have started reinforcing each other) we've been dealing with the events that lead to me being removed from the family and losing my day-to-day connection with him. I felt guilty about that, even though obviously it was not my fault that CPS put me in foster care. I felt that I abandoned him, and that somehow my presence in the family could have kept him from going down the path that lead to his suicide. Now that I am getting in touch with my feelings about the violence in our family, I am also remembering how concerned I was for him and how I thought at the time I was doing right by him by getting out of the family and being independent, as an example and also so that he could come stay with me if he needed to. In fact, now I feel like I did do the right thing, and the fact that it didn't prevent his death doesn't make it any less right. It is almost more uncomfortable to feel that I was powerless to save him than to feel guilty though. I hate the feeling that I was a victim in all that happened. But I was, and he was. That feels really sad.
Posted by Tealrat at 10:32 PM

for what i know about you through your posts, you're definitely one of the most strongest people i know.

i'm certain that your brother is watching over you and is proud of you for all that you've done and was able to get through. you are an amazing person, especially on the ice! :)