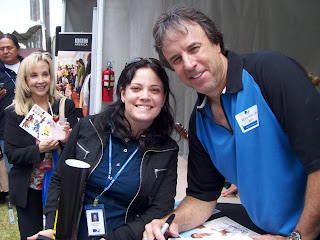 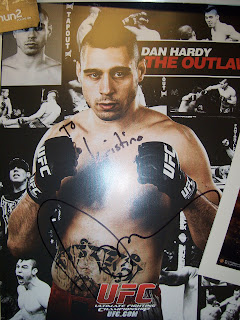 Today was the best day of the year, the Programmers Fair. It's a work thing that happens once a year when the TV channels set up booths and give us swag (pens, bags, squishy balls) and show off their TV celebrities. I met Kevin Nealon (currently on Weeds, formerly on Saturday Night Live, where I remember him from in the 80's) and Dan "The Outlaw" Hardy, a mixed martial artist who was there for the UFC. 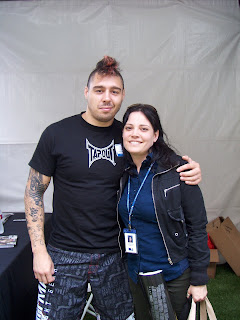 It was a lot of fun, and they were both very nice. It is kind of a tradition for me to get a picture of the UFC fighter and put it in my office. It started with Wanderlei "The Axe Murderer" da Silva, who wrote "To Kristina, Big kisses, Wanderlei". It was priceless. So my office walls are covered with pictures of hockey players and mixed martial artists. Some people have commented that I look like I am into violent sports.

I've been doing the EMDR therapy (eye movement desensitization and reprocessing, a treatment for dealing with traumatic and unresolved memories from PTSD) for six weeks now. It is kind of hard to describe the affect it is having on me. I have a big, black mass of feelings and experiences that I had to push down into the depths of my subconscious in order to survive. It is hard and sharp and immobile. My regular therapy is sometimes like taking a hammer to the mass and chipping away at it. The EMDR is something that is getting into the middle of it, and suddenly what was solid and hard is moving around in there, like particles have been activated and they are bouncing around, knocking into each other. Processing. It feels like processing.

The most tangible example of this is my dreams. Before I started with my current therapist, when I had dreams I could remember they were usually frustration dreams, where someone was doing something to me or threatening me in some way and I would get really angry but not be able to do anything. All this frustration and anger and fear would well up in me, but I was blocked from expressing these feelings or responding to them. I would feel all this pressure in my head and the rest of my body, and I'd want to scream or cry or punch a wall, but would not be able to move. I would be bursting at the seams with everything I was holding in.

Then last fall I started to have the "traumatic remembering" dreams, where I would wake up in the middle of the night completely terrified, and feeling small. Not just feeling small- I felt like a little kid. I was re-experiencing the fear I lived with as a child when I went to bed. I would be paralyzed by fear, and totally convinced that my dad was in my living room, waiting for me. My conscious mind would tell myself, over and over, that I was in my apartment, not the house I grew up in, and that if I just got up and walked into the living room I would see where I was and realize my dad wasn't there, and the spell would be broken. But it never worked. The fear was too powerful, and my body controlled the paralyzing, not my consciousness. That was why I started sleeping with stuffed animals, so at least I could comfort myself in some way while I was still in bed.

Now I'm having quest dreams. In these dreams I'm searching for answers about myself and my family, trying to make sense of things. In the most significant one that I remember, it started with a scene like from a movie. The Hobgoblin was drilling through walls and floors with one of his super-scientific inventions (symbolism: there was no where to hide from this bad guy, no where to go to be safe) and then Batman showed up. (I know, wrong series. It was a dream, you know?) Batman and the Hobgoblin start fighting in a bank, and innocent bystanders are trying to flee unsuccessfully (symbolism: my mom and my dad, who appeared to me so emotionally inaccessible that it was like they were wearing masks, are fighting and hurting my brother and I in the process even though we are innocent of any wrongdoing, and both appear to be the bad guy even though one is supposed to be the good guy/girl). Then I was with my friends, describing the "movie" I had just seen (symbolism: I escaped the violence physically, but I am still affected by it and need to talk about it.) Then I am walking around an area with vendors, and one of these vendors is selling swatches of cloth to sew together to make a scarf. The vendor hands me a piece of cloth and says, "I made this for you." I look at it, and it has a picture of my brother on it (symbolism: I am trying to piece my life together into something that can keep me warm and protect me from the outside world, and express who I am in a way that is beautiful and that I am proud of because it comes from me, although other people are helping me with this process.) I take the swatch, and then step into the scene in the picture and meet my brother. In talking to him, I realize that my mom is missing. I go looking for her, and while looking for clues about her disappearance come to realize that she was deeply mentally ill while I was growing up and unable to parent me, and that she has left me and will never come back (symbolism: my mom was physically present but not emotionally present, and I was emotionally abandoned by her as a child and I will never find emotional support from her, but I can find the answers within myself.)

My dreams are not just reflections of what did happen, but what is happening in my subconscious. They are gifts from a forgotten place. 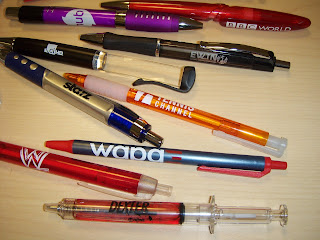 Can you describe what EMDR is and what actually happens while you do it.

If I was you, I would seriously consider taking up a Martial Art. Aikido would be my suggestion as it's a defensive only martial art.
I say this because Aikido would allow you to vent some of your physical frustrations and have confidence in yourself that if ever someone tried to harm you again, you would be quite adept at defending yourself, without becoming abusive about it. Age is not a limitation when it comes to Aikido nor is size.


Also in my opinion your dreams are a font of frustration that your parents treated you and your brother so badly and you were unable to do anything about it. Using myself as an example, I stood up to my abusive mother at the age of 14 and stopped her from hitting me for something I didn't do. My stepdad admitted when asked that he had done the deed and he would have told my mom if she had bothered to ask, rather than assuming it was my fault. Years later when I left South Carolina and moved to Nevada, I wouldn't speak to her on the phone. Eventually I wrote her a letter and told her exactly what I thought of her (in explicit detail) and that if she wanted any sort of relationship in the future, then she needed to change. I've given her 10 years (with limited contact from me) and she still is the same person. I did my best and all I wanted her to do was admit her own fault in everything that happened. Instead she changes the subject whenever it's brought up or pretends it didn't happen. I see that she will never accept responsibility for her a actions nor express any remorse. I have come to the conclusion that the woman I loved when I was a small boy, died in 1975 and the person I now know is not her. The person that was my mother has been consumed by this monster pretending to be my mother. So I can stay asleep and stay in this nightmare or I can will myself awake and get on with my life. My Mother is dead. I never really had a Father. My sister (as much as I love her) chooses to live with the Monster. I have tried to help her, but to no avail. I cannot get her to wake up.

So I would learn Aikido and perhaps you will gain the confidence in yourself that if the situation ever occurs again, you will kick your dad's ass.

May you be at peace.