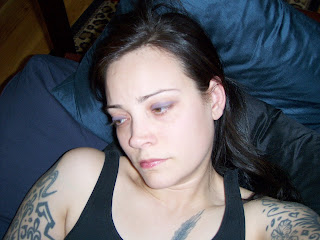 I've been feeling pretty crappy lately. Of course, it's kind of hard to tell if I've been feeling worse than before, and determining why I feel crappy is nearly impossible. Is it because my sleep is bad, anxiety, other PTSD symptoms, my notoriously poor digestion, coffee addiction related to my sleep problems causing stomach issues and headaches and migraines, food allergies, my body struggling to process the antidepressant and anti-anxiety medicines I'm taking, dealing with my emotional backlog... I could go on. I do know that usually when I'm having a lot of headaches and stomach pain, going on a very restrictive diet usually helps. My theory about my body is that the anxiety and PTSD causes my poor digestion. It is hard for my body to focus on processing food when I have so much else going on, and things like adrenaline screw you all up because when you are afraid your body figures digestion is a low priority. So when I eat "normally", that is, how most Americans would eat, my body practically shuts down because my digestive system just can't handle it. Even now, avoiding gluten (i.e. bread, pasta, flour tortillas) and dairy, it's better than it would be but I still feel tired and sluggish a lot. I'm really not a big fan of meat and would prefer to be a vegetarian except that I get iron deficient easily. I come close to being a vegan if I'm a vegetarian since I can't eat dairy anyway. When I was on the streets, I knew a lot of moral vegans, so I know that being a vegan is a lot more challenging than just not eating meat and dairy. A true vegan doesn't wear or use leather or wool, consume anything that contains animal products such as gelatin (including some vitamin capsules), or otherwise make use of anything that comes from an animal. On top of all that, I am chemically sensitive. MSG = very bad. Artificial sweeteners = very bad. I am already dedicated to only using makeup that doesn't have freaky chemicals in it.

I am also dieting right now = pain in the ass. I still haven't lost the weight I gained when my knee injury kept me from playing hockey, which was 10 pounds. I don't like it. My boyfriend's mom suggested I go vegan, and ever since I moved to L.A. I've been wanting to get back on the kind of diet I was on in Seattle. I ate out less and ate less meat and heavy foods. So I've decided to do vegan-lite, at least for the next month. I am going on a super-strict diet to see if I have more energy and feel less wretched. So here it is:
1. No coffee (dreading the major withdrawals)
2. No fried food (hard to digest, and heated oils are bad for your body)
3. No dairy (already know this messes me up, i.e. digestion shuts down, I get constipated, tmi)
4. No meat (hard to digest, makes me feel lethargic)
5. No gluten (kind of gives me the opposite reaction as dairy, more tmi)
6. No sugar (just screws up my blood sugar and makes me yo-yo, bad for yeast overgrowth in the intestines too. Vinegar and yeast is bad for this too, but lemon juice is actually good.)
7. No carbonation (makes my stomach hurt)
8. No chemicals (ditto)

I decided that I should avoid going out to eat during the month, since it is such a challenge to find something that's okay and I usually end up cheating in some way. I have to say, even though I've done these kind of diets before, I am nervous about how hard this is going to be. I am a total coffee addict even though I know it is bad for me, and I have been going out to eat a lot. I have been in IFRS (International Financial Reporting Standards) off-site training this week, and I am not doing well since all the meals are provided and they are pretty much all bad for me. I am planning to throw myself body and soul into this on Friday after work. Wish me luck. I am hoping to feel much better, but I may feel worse before I start feeling better.

In other news, my desire to simplify my life has really kicked with my apartment de-cluttering project. I am on a tear. I am getting rid of at least a third of my books, 14 pairs of shoes, half my purses, bags, and snow globes, and any number of random things. I am really motivated right now. One of my biggest fears is becoming a pack rat like my dad and grandma (it's pathological, I'm convinced). I have been firmly down that road and am trying to drag myself away from the abyss. I have this fantasy that getting rid of my extra stuff will help me let go of emotions and angst over my childhood I no longer need. Symbolism. Plus, I just think of all the women who totally kick ass in movies. They don't need a bunch of crap weighing them down. Seriously, for someone with so many apocalyptic themed books, comics, and movies (wildly apparent that I have some kind of obsession when I weeded through my books), I am not ready for the apocalypse. I'd be packing my stuff for weeks after the zombies had turned half the country. I'd be like, "Just a second, I can't join your army of the undead, or join the small, outmatched band of survivors, until I figure out which of these knickknacks goes to Goodwill. Please come back in 6 months when I've lost enough weight to fit into the leather pants and tiny top that is the uniform for women who sexily scowl as they chop the heads off zombies. Carry on."
Posted by Tealrat at 11:08 PM

Nekhtet on the unpimping. I've just spent a week cleaning my micro-office and it's so much more pleasant now. And I've gotten rid of two boxes of junk in the process. That always makes me happy.

Re: quitting caffeine--BE CAREFUL! Dropping coffee cold turkey can really make you sick. Especially your digestion. I go through phases when I am totally off coffee for a while, and I have a plan:

Step one: drink just enough black tea to keep the headaches/nausea to a tolerable level. Continue with this amount of black tea until you feel more or less okay. (couple days, couple weeks)

Step three: switch entirely to green tea, just drinking enough to not feel like death. (This is actually a pretty gentle switch.)

Step four: switch to herbal tea, and increase your physical activity just a bit, to compensate for the "energy" you're not getting from caffeine anymore.

In case it wasn't totally obvious from the above, I am such a Virgo. ;)

Right now I'm off coffee and holding steady with green tea for the immune system boost. I'm really run down and have been for a while, so I'll take all the help I can get. It coming with a bit of caffeine is a nice added bonus.

Good luck with the veganning!

Arieni! Thank you for the advice. That is really helpful. I like tea so that should help considerably. I'm kind of excited, but still nervous. I'm starting tonight. I can do this! I know I can!