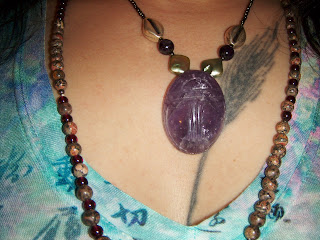 Last week I missed my first weekly blog post since March. It was because I was at a religious retreat. Yes, I am religious. I don't usually talk about it because I feel that my spiritual beliefs are a mostly private matter. They are very important to me, but it is not particularly important to me that other people know or understand or agree with them. I am really happy that I found a group of like-minded people to share my beliefs with, as well as to learn from them and enjoy their friendship and support. Really, what they provide me with is unconditional love and a big, sometimes hilarious, often touching family. I am lucky to have found them, because before I did, I didn't know anyone who thought about divinity the way that I do.

Still, it took me 9 years to actually go to their annual retreat and meet them in person. It was one of those wonderful experience where I felt instantly at ease with the group. I felt like I could just be myself, and myself was a good thing. I have been a very guarded person, and definitely struggle with letting people get too close to me. Being in this group, and finally meeting them in person and feeling so accepted helps me feel a little more open and trusting and willing to take a chance with people. I don't think I would be at this place, or as comfortable in this place, if it wasn't for my boyfriend. We've been together for eight months, and I went into dating him swearing that I would be myself, that I would be honest, and that I would wait until I felt safe and comfortable before taking any steps forward with him. Sometimes I feel like an emotional fruitcake around him because I am so unused to expressing my feelings with someone I'm dating. I get upset; I get jealous; I get confused. I pout and cry and I've had flashbacks and let myself pass through them instead of going numb and denying anything is wrong. I've done all those things in front of him, and he's never turned away in disgust or yelled at me or cheated on me or made me feel ashamed or unworthy. In fact, quite the opposite. I feel appreciated and loved and accepted. I feel understood. I might not have been open to those feelings before he helped me realize that I can be my imperfect, real self and still be someone people want to be around. In my heart of hearts, my self-esteem really took a beating. I really believed that I deserved all the abuse that I got. Now I am starting to feel otherwise.

On occasion, a reader of my blog has suggested that I can find unconditional love and forgiveness with god. I don't think I've ever responded to these suggestions because I don't want to offend anyone by suggesting that I don't see their religion the way they do. I have no problem with other people finding solace or satisfaction with a patriarchal monotheistic belief system. The way I see religion and spirituality is that different people have different needs and different experiences of the world, and so a one-size fits all approach doesn't make a lot of sense to me. I could totally see how someone who doesn't struggle with death or what they are supposed to be doing on this earth or the other big questions most religions attempt to address might not need any religion at all. There's nothing wrong with that, as far as I can tell. I can think of lots of people who are not religious who are still morally-upright, caring, compassionate people. I also have a lot of respect for people who do charity or volunteer work in the name of religion. I don't see it as a religion bad vs religion good question. The way I see it is that I don't want a god to substitute for a father figure, I consider hell to be a really cruel concept that I don't want as part of my belief system, especially if it involves sending people I love there, like, for example, someone who was so mental ill and hurting so badly that he killed himself, and I'm a polytheist. I have been for as long as I can remember. As far as I can tell, I was born thinking that divinity comes in many forms, and that the source of life, time, timelessness, and the mysteries that are just beyond human comprehension is not a single god, but rather some kind of energy or power or consciousness that is not human, but can take human-like forms in order to interact with us. I believe that my brother still exists in some form, and that I can communicate with him and he can communicate with me. I think that it is possible that some part of me can move on after I die. I don't know what that would be like, and I don't know that I would be able to understand it now anyway. I know that I have had experiences of the divine that I have faith are real. I believe that I am part of a spiritual world. That idea gives me comfort and helps me balance the despair I feel over the violence, hatred, intolerance, and cruelty in the world and in humanity. My faith doesn't blind me to the bad things, it helps bring me a sense of balance and hope so that the dark shadows don't feel so heavy in my heart.

So, as sort of a mass acknowledgement of everyone who has encouraged me to look to their religion for comfort- I appreciate your concern and compassion for me. I am touched that you care. I come into religion with a lot of needs and requirements and long-standing beliefs, and I've found something that really works for me. It comforts me, but also challenges me to go beyond what I can figure out for myself. It never violates my own sense of morality, but doesn't let me off the hook either, i.e. it's not the kind of thing where you don't have responsibilities to others or expectations for certain levels of behavior. It provides a structure that works for me, but enough flexibility that I can ask my questions and make my own decisions and discoveries. I am pretty amazed at how well it works for me, kind of similar to how amazed I am that I found a person to date that I can totally be myself with. Nekhtet!
Posted by Tealrat at 9:59 PM