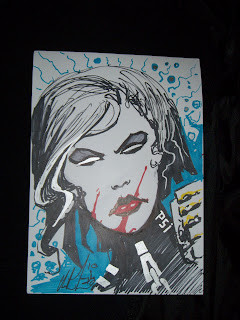 I tried to post pictures while I was at Comic Con, but it didn't work for some reason. The one to the left is the best. We were wandering the floor and I saw 2000AD! They are a British comic book publisher that does Slaine the Horned God and Judge Dredd, among others. I haven't seen their comics in many years (since the early 90's when I first moved to Seattle) and before the internet got going I had a hard time finding anything, despite that I worked at 3 different comic book stores in Seattle and frequented others and comic book conventions. Oh, how times have changed. It used to be that I was the only girl for miles at comic book conventions and I was treated completely different at the comic book stores than the guys, and now I can go to Comic Con, which is HUGE and absolutely crawling with fantastic women. God/Goddess bless progress.
So anyway, I started talking to the genuine British guys at the 2000AD booth (they all had killer accents) and they told me to come back later because a lot of their titles had been held up at customs, including Judge Anderson. Judge Anderson is a character that basically works alongside Judge Dredd, although I wouldn't really know since I could never find her comics back in the day. So when I heard that I could get possibly get a Judge Anderson graphic novel if I came back later, I swore I'd be back. So we went to find hats with ears and eat lunch, and then went on a quest to find the 2000AD booth again. If you've never been to the San Diego Comic Con, the floor is massive and it's so crowded you are literally inching along, and we mis-remembered the area the booth was in and had to look it up in the guide, and they put it under "T" (two thousand AD?) and my cousin was giving almost nil odds that they actually got their shipment, and yet, lo, we discovered the elusive booth hiding in the corner, and lo! The table was teeming with shining graphic novels and Mr. Pat Mills and Mr. Clint Langley. (Look them up, oh comic book geeks.) As the universe shone upon my enthusiastic endeavor, I struck up a conversation with a graphic designer for 2000AD who found me my Judge Anderson graphic novel, D.R. and Quinch, and recommended his favorite Judge Dredd story, and asked if I might like Clint Langley to do a sketch for me. Why, HELL YES I would! So Clint Langley proceeded to take up assorted sharpies and draw, in front of my very eyes, the picture of Judge Anderson you see above.
I officially declare it the most AMAZING INCREDIBLE MIND BLOWING memento of any convention or other such event EVER. 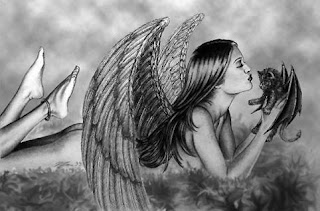 Random naked angel chick, with kitty
In other spectacular news, my oldest rat Jason escaped from his cage the other night and had an excellent adventure. At least, I assume he did. I woke up and he was running around the living room. I startled him and he ran under the couch, but when I called his name he came over, and I scooped him up and returned him to his cage. I actually keep his cage door open most of the time because it is up on a table and he usually shows no interest at all in doing anything but standing on top of his cage and waiting for me, or staring down at the little rats. But I'm glad he got to break out and be free. He had a special gleam in his eyes when I put him back in. 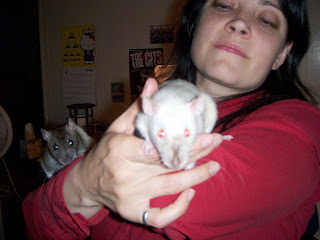 This is actually Miroslav and Zeus in the picture, my little ones. Miroslav is getting quite large, almost as big as Jason. Zeus is the little one, but he keeps out of the way. Miroslav and Keith are boxing rivals, and Miroslav and Jason spend a lot of time squeaking at each other in between the cages. Keith is not particularly social, but Zeus is even though he is shy. Miroslav is not afraid of anything, and Keith is just not that interested in hanging out, but Zeus tentatively looks for attention. If you hold your finger out to him, he almost always licks you. This morning he was pressed against the cage so I rubbed his belly. He seemed to like that very much. Jason's big thing is having his ears rubbed. He closes his eyes and gets very relaxed. Even after having pet rats for so long, I'm still amazed at how individual they are and how much personality they have. Rats are my animals. Social, inquisitive, shy but outgoing at the same time- they are the ultimate survivors and can adapt to any conditions. They are my little superheros and inspirations.