Fantasies of Sin and Punishment 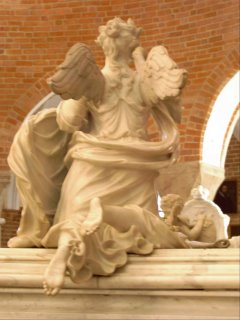 I had a breakthrough last week. The SOS homework was about guilt, and I just happened to be reading about guilt in my self-esteem book. We read an article for SOS- "Guilt: How to Overcome It" by Margaret H. Gerner, M.S.W. (No, I do not know what M.S.W. stands for. Medical Statistics Wiz? Mental Swami Woman?) The article listed different types of guilt, and I have had them all at one time or another.

Causal guilt is a big one- I caused the abuse; I caused the rape; I did not do enough to save my brother, therefore I caused his suicide. Cultural guilt- I had to be a good daughter after Jeff's suicide, and not walk away from my parents as I wanted to because then both their kids would have abandoned them. Moral guilt- the suicide, the rape must have been punishment for something I did, otherwise, what could explain such terrible things happening to me? How could those things just be random, how could it have had nothing to do with me? Recovery guilt- I can never be truly happy, because that means I will have to forget my brother's suicide and betray his memory. The biggest source of my guilt from Jeff's suicide is survivor guilt. I had been suicidal; I had been depressed, why didn't I die? Maybe if I had committed suicide, he would still be alive.

When I wrote about the sexual abuse and the rape (in this blog) it really helped me let go of a lot of guilt. I had to put myself in my own shoes at that time, and remember what it was like for me. I discovered that my unexamined memories, the ones I avoided because they were so painful, were actually the key to freeing me from the self-destructive way I thought about my past. I realized that I did not have much in the way of options, and I did the best I could to protect myself. Similarly, when I re-examined what I was thinking and feeling at the time of Jeff's suicide, I began to appreciate what a struggle it was for me to just get through that time. I was fighting my own depression in the months and years before Jeff's death. I had three more quarters of college to go, after 5 years and dropping 2 quarters because of depression. I had worked really hard to get that far, considering I was a high school drop-out living on the streets just a year before I started college. I was just trying to keep my head above water long enough to graduate.

I was afraid- afraid for myself, and very afraid for my brother, who I knew was struggling with his own mental illness. I knew how hard it was, especially when you do not have a future you are fighting for within sight. The proverbial light at the end of the tunnel, in other words. Jeff was just starting out, and had not figured out how to pay for college. I realized how serious his situation was, because I had been in similar darkness. The thought of Jeff taking his life was so horrifying I did not even know how to think about it. It was difficult, even impossible to fathom, and something I could not prepare myself for, as much as I feared it.

After my worst nightmare came true, I tried to block the grief out as much as I could, because I HAD to finish college. It was all I was living for, and if I gave up on that, I would give up on everything. I did not think I could handle facing what had happened along with just dealing with my day-to-day life, and I was afraid I would get so overwhelmed it would send me over the edge. I put it off until my regular life finally settled into a (boring) routine, and my feelings would not be ignored any longer. That is why it took me so long to deal with all the repressed pain. I did what I thought I needed to survive.

It was a breakthrough because now I can forgive myself- I did the best I could under the circumstances. If I had been in a different place, maybe I could have done more for my brother before he died, but no matter what I did he probably would have still taken his life. If I had freaked out after his death, and let the confusion and agony inside me dominate my outside life, I may not have finished college, and then where would I be now? I did what I thought I had to, and I can respect that now. I am strong, what I have dealt with has been tough, and I am proud of who I am and what I have accomplished.
Posted by Tealrat at 10:12 PM

Just to let you know:
Masters in Social Work, that's what my lady is in school for.

You *should* be proud of yourself. You have been through a lot more than anybody could ever imagine, and have also accomplished more than most.