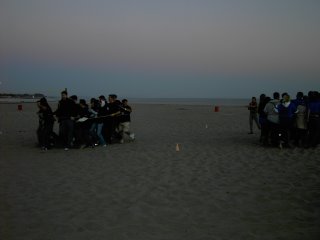 I still wonder about evil. There is so much going on in the world that I do not understand. How can people do such horrible things to each other? I wonder if people who do terrible things think badly of themselves, so they are bad to other people, or if they think the people that they victimize are worth less than they are. Probably both.

It seems to me that there is no justification at all for rape and the abuse of children, yet it happens so much all over the world that large numbers of people must find these things tolerable. Otherwise, it would not be so pervasive, would it? Why do so many look the other way?

I was almost completely ignorant about sex trafficking- selling women and children who are forced to perform sex work, until I saw a Frontline episode called Sex Slaves. If you are unclear on how someone could be forced into prostitution, how their slavery is maintained, the conditions they are forced to live in, or how sex workers are brought to other countries, including the United States and Canada, I recommend looking at the website. It is really shocking that women and children could be treated this way. I was raped only once, and the experience deeply traumatized me. I cannot even imagine what it would be like to be raped repeatedly every day, both by your "clients" and the person who "owns" you. From the stories on the website, it seems pretty common for the trafficker or the pimp to repeatedly rape their victim to break them in/break them. Of course this torture is coupled with additional violence and threats. Imagine if you were in an unfamiliar country, did not know the language, had no one to go to, no money or identification, and this violent psychopath is controlling your every move and threatening that if you try to run away he will find you and make you and your family pay. Not surprisingly, many people victimized like this end up committing suicide.

When I was in India, the last night we were in Mumbai we went to the dance club in the Taj Mahal, a popular hotel. At some point, a woman came out on stage and did a stripper dance (without taking off her clothes). She looked Eastern European, with white skin, blue eyes, and blonde hair. She had a completely blank look on her face, like she wasn't even aware of what she was doing. A large group of men, many of them abandoning the woman they were with, ran to the stage and pumped their fists in the air while they hooted and howled at the woman. It was really disturbing. The men who responded that way included several men in my group, one of whom was later arrested for soliciting what he thought was a thirteen year old girl for sex over the internet.

Speaking of child exploitation, Friends of Thai Daughters is an organization dedicated to preventing child trafficking. According to their website, "UNICEF estimates that over one million children are trafficked each year, the majority into sex slavery and prostitution. The Golden Triangle, where Thailand, Myanmar (Burma) and Laos converge, is home to a vast and growing network of human traffickers, seeking out troubled and impoverished families with few options.

These traffickers promise jobs as waitresses or maids in distant cities. Instead, girls as young as eight years old are confined to brothels where they may be forced to service up to 20 men per day, at risk of contracting HIV/AIDS or other diseases. Older girls are often sold overseas, where they are stripped of their documentation and left powerless to escape."

Here is a story about a journalist in Mexico who is in danger for reporting on child-sex-trafficking rings in her hometown of Cancun.

What is wrong with this world?
Posted by Tealrat at 4:52 PM