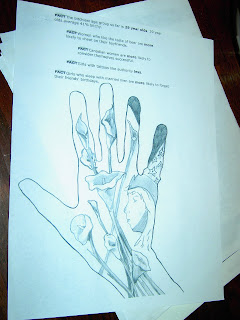 Okay, it is way too late at night for me to be blogging, but I just feel like it. Due to my problems with insomnia, I'm not supposed to be doing anything stimulating at night, but this week has been verrry stimulating.

Monday was Christmas of course, and Tuesday I saw my psychologist for my PTSD treatment. We've made a list of flashbacks that I regularly have, and we're going through them, from the least intense to the most. (I would have preferred to go from the most intense to the least, but I'm impatient that way.) I do some deep breathing to activate my parasympathetic nervous system (as opposed to the sympathetic nervous system where PTSD lives). I close my eyes, and describe everything I can about being in the flashback- where I am, what I see, what I’m like (age, what I’m wearing, what I’m experiencing), and even what it smells like. I talk about how I feel, and (we're getting into therapy-speak) what I needed in that situation that I didn’t get. Then I imagine myself walking in, picking myself (in the flashback) up, and carrying me out of the situation, i.e. rescuing myself. Then I imagine looking back as the place becomes dark and fades away.

This probably sounds a little wonky, at least it did to me at first, but it works. I feel rescued. I don't feel trapped in the little kid who was trapped in the situation. I feel like an adult who can save myself. I'm turning 35 next month, and I feel 35, not 8, or 17, or 25. (I don't feel like my brother would be turning 29 on Sunday if he was alive, but that's another story.)

On Wednesday we started a new flashback, and it was difficult. They take 2 or 3 sessions to work through, and that's just with the milder flashbacks I've done so far. After we went through the scene, I realized it really brought up a lot of feelings about my mom- confusion, anger, resentment, and frustration with how disconnected and absent she was as a mother. I left my psychologist's in somewhat of an emotional turmoil. That night, I was meeting an old school friend, Mariya. (If you hate me using your real name, honey bear, let me know.) We went to high school and college together in Seattle, and had been good friends but in the last 10 years had only seen each other once (when we ran into each other at a brew pub). We kept in touch through MySpace since then. She lives in Alabama but grew up in Seattle, so she was in town for Christmas.

We met at Liberty, a bar with sushi on 15th. They are supposed to have espresso, too (so Seattle) but don't have hot water (? I'm still confused about that) and I wanted tea, so after a drink we walked down the street to a very hip Seattle cafe. We were kind of making fun of Seattle's sushi and espresso on demand culture, girls with ridiculous hats, and sensitive Seattleites who are full of themselves, but then we got into a discussion about the book I'm reading, and other family/abuse dynamics. It was perfect- we talked about the yucky stuff and I got to get what I was feeling off my chest without it dominating the evening. When we decided to go back to Liberty for sushi we realized that we were having a very Seattle evening even though we had poked fun of that same lifestyle earlier.

We had a fabulous time at Liberty. We sat at the bar and made friends with the bartender and owner, or owners, or something. They took good care of us, and the sushi was divine. Mariya and I reminisced, laughed about our inside jokes from 10 years ago, talked about boys and girlfriends, and chatted with our new friends about religion and music. We closed the place out. It pains me to leave when the party is still going on, so I was lucky I had the whole week off from work. I was really happy with our full night of drinks, food, and conversation.

The next day I had another appointment with my psychologist. Everything came out- my worst fears about how my parents had screwed me up, that I was damaged, and that I might always be messed up. All this bitter cynicism about my life and myself. I've really been struggling with resentment lately- the holidays brings up a lot and I miss my brother so intensely right now. I learned with my grief work that if I don't let myself feel these negative emotions they will never get worked out and, most importantly, go away. I wasn't sure if this would work with resentment, but I was giving it a try.

My goal with Christmas this year was to really feel the sadness and not numb myself out, so I figured I should do the same with other emotions. Resentment and bitterness are the hardest for me, though. They are so counter to the way I see myself. I don't want to blame other people for my problems; I don't want to seethe with anger at people who aren't even part of my life anymore, and I especially don't want to see myself as a victim. That's how I got through my childhood- by not allowing myself to feel victimized. I believed I was strong, smart, and could take care of myself. Bitterness didn't help me. Anger is motivating, but resentment just eats away at you. It's not who I am.

I just unloaded to my psychologist, though, and did that really hardcore crying where my eyes puffed up and turned red and my nose was so stuffed up I could barely breathe. Afterwards, I realized a major change had taken place. I used to feel ashamed after I cried like that- weak and pathetic. But I didn't feel that way. I felt relief. I felt release.

I met up with 2 other old friends who were in town that night, Bengt and Marc, and Marc’s sister Nicki (spelling? Sorry if I got it wrong). We caught up, laughed about our screwed up childhoods, and went dancing at Neighbors. They played eighties music, very eighties music- Walk Like an Egyptian, Love Shack, Relax (Don't Do it), Come On Eileen, Pleasure Little Treasure, Boys Don't Cry, Bananarama, Erasure, Duran Duran, Dead or Alive, New Order... They played a Cure song that Bengt loves so much he got goose bumps, and then they played a Joy Division song that gave me goose bumps. We sang along, tried to imitate the dances from the videos, pantomimed the lyrics, laughed at the other people who were dancing crazy, falling down drunk, and dry (or not so dry) humping each other.

I got into a shoving match with a guy who smacked my friends and me on the head (and messed up my hair. Unacceptable!) He called me a little bitch, much to our amusement. We moved to another area on the dance floor where the gay guys were more interested in each other than me, and a sexy woman salsa danced with me and felt me up. Just when I was speculating as to whether I could switch sides, her boyfriend took her away from me. We laughed hysterically at a guy who sang along to Gloria at the top of his lungs, collapsed to the ground when a song told us to, invented a new dance to break these chains of love (don't give up), and danced for 3 1/2 hours straight (until 3 am), but the most memorable part of the night was when I realized that I don't feel bitter or resentful anymore. It wasn't like I was on a dancing induced ecstasy trip where I loved everyone (I was totally sober too), but everything felt right to me. I felt right with myself and right with the world. It wasn't a temporary feeling either. I've felt that way since. I've been liberated.

We returned to Liberty tonight for more drinks and sushi, and closed the place out again. It's not a nightclub, it's a lounge, so act like it! It was Mariya’s last night in Seattle. She had a little too much, uh, seaweed. I can't remember the last time I felt so much like myself, only myself now is much more (therapy-speak) centered and happy than I've ever been. I can't help being a little sarcastic about all the self-help books, therapy, support groups, etc. that I've put myself through in the last year, but they've really helped. The last 4 days, though, have been the most fun part of my recovery so far, and I owe it all to laughing with my friends, dancing, and sushi. Seattle's not so bad after all.

How great is it that I'm going into the New Year feeling like this? New Year's Eve is my brother's birthday, I feel sad about it, but not angry. Tonight I’m picking up my amazing friend Michelle up from the airport. I missed her! She has a fabulous night planned for Sunday. 2007 is going to be a great year. I can feel it. Happy New Year everyone!

Oh...you sweet thing. That just made me smile and smile. Have a wonderful evening but go easy on the seaweed.

jeez, I drank a lot of wine tonight. I'm a little dizzy. can't wait for my birthday! hope you had a fabulous new year. 2007 is going to kick ass!!!