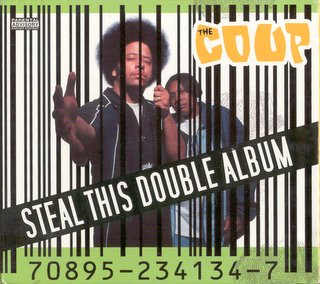 The Saturday after Thanksgiving, I saw one of my favorite groups, The Coup. Before they came on, there were just a handful of people milling around, watching the opening acts. Then Boots came on stage, and the whole place seemed to fill up. I still don't understand where everyone came from.

DJ Pam The Funkstress wasn't there (sad) so Boots Riley sang in front of a band. On their CD's it's just Boots and Pam (and rapper E-Roc on their first couple of albums), so it was a different experience with a band. I liked it, even though I was disappointed I didn't get the DJ Pam experience. Boots wore a suit, and moved around the stage like he was channeling 70's funk, accentuated by his signature afro. The man has Stage Presence.

After they played, my friend Dave and I noticed Boots in the crowd talking to his devoted fans, so we went over. Boots shook my hand! I was thrilled. I contemplated never washing it again. Then, when we left towards the end of Mr. Lif's set, Boots walked out after us, so again I pumped his hand and gushed my gratitude for his music and for coming to Seattle. *sigh* It was dreamy.

Seeing The Coup live and my encounter with Boots caused me to reminisce about some of the memorable experiences I've had at shows. As a huge music freak, probably 2/3 of my most cherished memories involve shows, dancing, or driving around listening to music. They are too numerous to mention all of them, but they include:

-Talking to Jello Biafra from the Dead Kennedys. I was just going to thank him for his music and express my admiration, but he started asking about my tattoos. I was thinking, "holy crap, Jello is making small talk with me. I can't deal!" I got so overwhelmed I walked away mid-conversation. My friend said he looked confused when I did that. He was so tall. He teased the guy before me about wanting him to sign his stomach by saying "if you were a girl you'd want me to sign your boobs." I was so nervous he would think I was some ridiculous groupie that I started the conversation by saying, "don't sign my boobs." (2005)

-Seeing Flipper play with the singer lying on the stage during most of the show because he was too drunk (and most likely high) to stand. People were throwing joints on stage, and a woman threw her underwear up there. I was flabbergasted. At a punk show? I seriously doubt he could even get it up. (1992)

-Captain Sensible from The Damned sticking a banana down his pants (front and back) and trying to get someone in the audience to eat it. (1996)

-A Subhumans show with more mohawks than I'd seen in a long time, maybe ever. A bouncer dragged a guy out by his mohawk, who was fighting with four of them trying to kick him out. It looked like it hurt. (2006)

-At Gas Huffer's final show, a bouncer stood next to me (arms crossed) during half the show to protect me from a big fat drunk guy who kept slamming into me and screaming in my ear (presumably to move me out of my place in front of the stage. I refused to back down. It was Gas Huffer's last show ever, after all.) (2006)

-Totally annoying a group of teenagers at a Circle Jerks show because I sang along to all the songs and tried to push in front of them, repeatedly. Keith Morris, Circle Jerks front man, original singer for Black Flag, and punk rock god, made fun of his age in between songs. He had dreadlocks down to his ass, and a little bald spot on the back of his head. I was in total awe of him. (2005)

-Mr. Chi Pig, Singer Man for SNFU, doing back flips off the drum riser during the WHOLE show. He had more energy than anyone I'd ever seen, ever. I believe he was in his 40's at the time, and had never done drugs. He also had dreadlocks down to his butt. (1993)

-The cops showing up at a Reason For Hate show at the Party Hall, and the drummer trying to pick up his entire drum kit and run out the back with it. (1991)

-Wandering into a venue at Bumbershoot and seeing Alice In Chains when they were still butt rockers. The entire audience and band had tight jeans and big hair. When I tried to get a closer look, I got hairspray in my eyes. The head banging made it fly everywhere. (1990)

-Hanging out with my friends in the alley behind the OK Hotel because we didn't have the money to get into a Poison Idea show. The band happened to come out to smoke and have some beers. They shared their beer with us (we were underage) and snuck us into the show. (1991)

-Chatting with Mike Palm from Agent Orange before the show. He agreed to play my favorite song, and I was in heaven. I got more bruises slam dancing in the pit at that show than any other, primarily because I was so excited and the stage was shin height. (1995)

-Running into an old friend in the bathroom at an Exploited show. I gave her my business card. It just compounded the irony I felt jumping in the pit while my friend from business school held my coat. (2003)

Email ThisBlogThis!Share to TwitterShare to FacebookShare to Pinterest
Labels: music

Another great post. The album reminded me of The Conflict I bought in the 80's that said, "if you can't steal this, pay no more than five pounds."

totally! I love Conflict. I think Chumbawamba had a "steal this album" campaign too. I wonder if British anarchy anti-capitalism punks inspired The Coup at all. if not, it seems an odd coincidence.