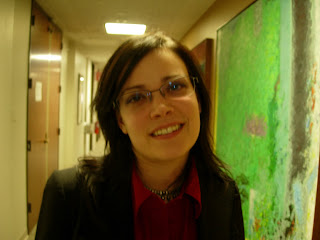 Say hello to my new glasses! I got laser eye surgery in 2000; before that I was so nearsighted that without glasses or contacts I had to hold something 3 inches from my face before I could identify it. The surgery has been a miracle, but lately some of my co-workers have commented that I was squinting. I was also getting headaches. When I got the surgery they told me that it wouldn't prevent me from possibly becoming farsighted when I got old, and since I just turned 36 I thought, oh my god, I'm so old my eyes are going bad!

Actually, the eye doctor said I still had some slight myopia (nearsightedness) that wasn't corrected by the surgery. I haven't actually gone to the eye doctor since the surgery besides my follow-ups, so it had never been detected before. I'm not a big fan of going to the doctor, even the eye doctor. I only go when I have to. It was a good thing I went to the regular doctor last week, because she said both my ears and my sinuses were infected and put me on antibiotics, and I am finally starting to feel better after 2 1/2 weeks of being very sick. It's been at least 10 years since I've taken antibiotics. They are so overprescribed, and they screw up my stomach, so I have worked to avoid them. I think in this case it was worth it, though. And I love my new glasses! Since the prescription is so weak, they are not like the glasses I used to wear. When my eyes were so bad before the surgery, contacts dried my eyes out, and my glasses were so thick and heavy that my nose and ears would hurt from the sheer weight of them. I was so thrilled after the surgery to not have to wear them.

These glasses, though, are much lighter and they are Dior, baby! Very classy. I was relieved that my eyesight problems had nothing to do with my advancing age (I know I'm not that old, I'm just nervous about getting closer to the big 40) and saw a golden opportunity to make my new glasses do some work for me. I look younger than I am, which is a blessing, but I feel like some people, especially in work situations, don't take me as seriously and overlook my experience and knowledge. And 25 year olds are always asking me out. So I asked the woman who helped me pick out my glasses for frames that make me look smart and professional, and definitely not young. I am very happy with them. I feel smart and professional in them, and I feel like they do reflect part of my personality because I am, deep down, totally nerdy even if I don't look it. I was painfully geeky before hit high school and developed into a goth punk rocker with tits. My physical development certainly affected the way I was treated, especially, as you might imagine, how I was treated by guys.

I am, to this day, pretty uncomfortable with getting attention based on my physical appearance, and still feel a lot like the nerd I was in junior high who was just totally clueless on how to interact with people. I have developed into a very social, outgoing person as I've gotten older, and I love meeting and talking to people. Other people are wonderfully fascinating and interesting, and I feel very comfortable talking about a lot of things. There are definitely a number of topics that I don't know how to approach with other people, though. I'm still working on how to have a public persona that doesn't display too much of my inner life, but does reflect who I am in less of a guarded way. The parts of me and my past that I'm uncomfortable with and still struggling with are usually the parts I try to segregate and block off from myself, and the process of bringing myself together and accepting myself has an effect on my public face. Without really thinking about it, I am feeling more at ease with the person I am around other people.

This blog has really helped. I talk about myself and feelings in the blog in a way I can't do with people face to face, but the experience of expressing these painful things on my blog and getting positive feedback and encouragement has opened me up, helped me feel better about myself, and given me hope that someday I will feel totally accepting of myself and my life, and at peace with my past. I still feel ashamed and apologetic about my feelings and about wanting and needing love and support from other people, and it shows when I'm embarrassed about myself and I let boyfriends treat me badly. Those feelings that I don't deserve to be treated well make me a target for bullies and users. I really got sucked into a self-defeating cycle that was making my guilt and frustration worse instead of better. It's one of those curses of PTSD- being drawn to situations that remind you of the trauma in an unconscious effort to work out unresolved feelings.

I know that I've turned a corner and I am out of that cycle now, because I feel like myself again. Myself, only better, because I'm more confident and experienced, and more hopeful than I've ever been. I believe in myself and I know I'm going to get past this and feel genuinely happy and satisfied with my life. I’m dealing with and connecting with who I was before my brother died, and while that kind of makes me feel like I’m regressing, I have a lot better tools for working out the painful stuff than I did when I was in my teens and early twenties.

A big part of feeling like me again is that I've been doing fun things and enjoying L.A. Filling up my schedule is also a good way to distract me from getting involved in another destructive relationship. An odd thing I've been doing since my brother died is dating guys who are loners, and spending a lot of my time just with them being their loner companion while they took out their weird “commitment issues” on me. (I am super tired of hearing that particular excuse for being a jerk.) This is not me. I am not a loner; I am an extrovert, and this lifestyle always became tedious and isolating for me. I am grateful that I did have had fantastic support even though I’ve been in L.A. less than a year. I love my co-workers. They were there for me when my last boyfriend was acting erratically, freaking out on me, and when we broke up. I enjoy doing thing outside of work with them, like last week when one of my co-workers went with me to the Washington Week taping, and he was very supportive of my blog.

One of my co-workers has become a great friend. She is married and a little older than me (although not so much older than me as she tries to pretend). She is also insightful, easy to talk to, and fun. We are taking a Spanish class, and work out together. Sunday we went to a group hike. There is a group of hiking geeks here in L.A. that has hikes every Sunday at different locations. I have been on their mailing list for a while, but this was the first time I went. We hiked a trail in Griffith Park, and we met some total geeks. (I mean this in a totally positive way, especially since they self-identify as geeks.) I've never had such interesting conversation while hiking. I even talked about my blog and PTSD a little, and I didn't feel self-conscious about it even though I had just met them.

I started a writing workshop for “creative nonfiction” last Thursday. I haven’t been in a writing group since college, and never occurred to me that I could find a structured group for the type of writing I do. This workshop is taught by an experienced writer who runs a number of other workshops, including ones that a good friend of mine has been in for years. My friend, besides her novel writing, is also working on a play that had a fundraiser last Saturday. My cousin and I went, and it was a good time. I read a poem. Since it was a Valentines-themed party, my friend suggested something naughty, so I read the only poem I have ever written about sex. This was a big challenge for me, because as I explained to my audience, I’m kind of a prude. (More about that later.) Reading the poem was amazing for me- I love poetry and I love being a poet, and I felt really good about myself for writing and reading the poem. I wore my glasses while I was reading it, so I felt like a smarty-pants naughty kickass poet.
Posted by Tealrat at 8:31 PM

I love the new glasses!!

Thanks! How are you doing?

I'm good!! I think you should visit me in Boston sometime. :)