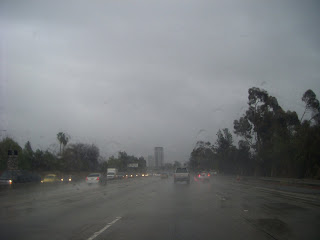 If I thought I was escaping the rain by moving to L.A., I was certainly misinformed! 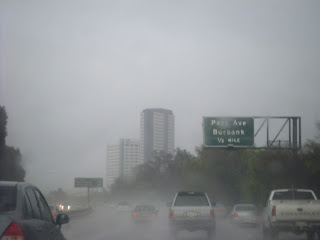 Tonight I went to an Oscar party, and since the writers’ strike is over, this was a very happy day in Hollywood. Unfortunately, the red carpet was a red sponge due to the rain, but the fashion parade was still fabulous. I am a gi-normous Coen brothers fan, so I was thrilled they won best picture with "No Country for Old Men". I just went to see it last night with a friend. I liked it a lot although it was exceedingly bloody. It was not a movie heavy with dialog, either, but there was one conversation that struck me as especially profound. The sheriff played by Tommy Lee Jones asks his uncle, who had been a police officer, if he would have gone after the man who shot him if he had been released from jail. His uncle tells him no, that when you try to get back what was taken from you, you leave the door open to lose more, and at some point you realize it’s better to find a tourniquet and stop the bleeding.

I brought my camera to the party, but I don't want to embarrass my friends by posting all the surprise photos I took of them, so here's a picture of the lovely spread instead: 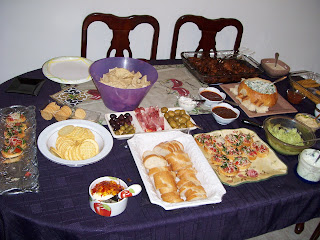 Here's me, concentrating intently on the comic stylings of Jon Stewart and watching for the next presenter to slip on a particular spot on the stage: 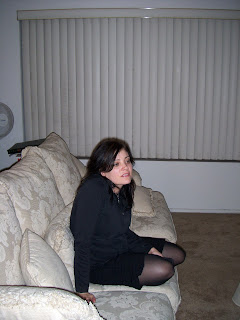 After I read my one and only poem about sex at my friend's fundraiser a couple weeks ago, I started writing about why I am so uncomfortable with the subject. I produced pages and pages of feverish writing, sometimes pulling my car over so I could get my thoughts on paper, and I fully intended to transfer my musings onto my blog immediately. This proved harder than I expected. My first experience of sexuality was being fondled by my great-uncle when I was 8, and I still associate sex with humiliation and fear. I was disgusted with being touched until well into my teens, when I decided to overcome my fear in the only way I could think of, to do it and hope I would get used to it. I put on an act, developed a persona, that I was confident, grown up, and fearless, and not the scared little girl I felt like. I hated feeling so vulnerable, and I hated the idea that older men would see me as the perfect youthful virginal victim.

I got good at the act, and while it didn't prevent plenty of perverts from going after me, I didn’t feel as much like that helpless little girl. I did feel disgusted with sex, though, that it was something done to me by the guy for his benefit. It felt degrading. I don't feel like I ever developed my own sexual identity, one that is truly a natural part of me and not just what I think is expected. It's hard to even know if I enjoy sex or have the capacity to when I feel like I’m just putting on an act, and afterwards I feel dirty, sickened and alone. I suppose it’s no mystery why I don't feel like I can emotionally connect with my boyfriends, and I find it nearly impossible to discuss my difficulties with sex, especially with a partner.

"By the way, I know I never mentioned it before, but I feel like throwing up when we have sex. Don't take it personally. I know I acted like I was into it, but I was faking and you didn’t seem to notice. Don’t get me wrong, it wasn’t all bad, especially when you were attentive and paying attention to me. I meant well. I really did. I thought I would eventually feel comfortable and safe with you and it would turn into a wonderful expression of intimacy and love, but since I tend to go out with guys who are emotionally distant, self involved, or insensitive, and I interpret the lack of emotional closeness as evidence that guys are only interested in me for sex, I am forced to conclude that we will break up and I will push my hurt feelings down even farther, and then I will try again with someone else who I think is different and really cares about me this time, I hope. I am just fooling myself, though, because until I unwind all these years of feeling degraded and damaged, I will keep repeating the same self-destructive pattern in my attempts to distance myself from the little girl who feels terrified, alone and unlovable. At least with you I was able to pretend for a while that you loved me and there was hope I could trust you enough to let down my defenses. My fear is that if I stop doing this, I will go back to being the person who recoiled from human touch and what if I never get past that? What if I can never stand to have sex without disassociating and the panic and flashbacks become too strong to block out because I'm not in denial about what happened to me anymore? What if I end up exchanging limited emotional and physical intimacy for none at all? What if I open the floodgates and drown in my negative feelings about my own sexuality?"

Maybe you can understand why I have avoided this subject for so long. I was too young at the time to understand what was happening to me and why, and until recently I didn't see any other option but to push it down and live my life as if everything was fine. Fake it until you make it. I figured there was the possibility, remote as it was, I would get lucky with someone who would reach into my soul somehow and convince me that I was more to him than a sex object, and that would prove to me once and for all that my great-uncle and dad were wrong and I'm not some worthless thing, my body isn't dirty even though it was used for the sexual gratification of a disgusting pervert when I was so young, and I'm not trash because I'm a woman and women are sexualized but that's okay because sex isn't bad and degrading. I hope sex isn’t bad and degrading, and I hope that if I'm opening a Pandora's box that my demons will fly away and I will find a good tourniquet in that box.
Posted by Tealrat at 10:46 PM