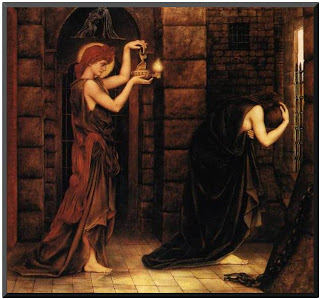 I have a new therapist, and wow, she is such a professional! By which I mean, she knows more about this stuff than I do. Yay!

Not that it was particularly fun, but I was impressed. I never even mentioned the whole dissociation thing, and she picked up on me doing it right away. She even said- you were talking but you weren't there anymore. She was right, but I didn't know I was doing it (since I wasn't there anymore). Then she explained to me how I was more aware than I realized, and helped me pick out what I was feeling and thinking that I was trying to distance myself from. She totally understood what had happened to me with the email, and the taking a week for it to hit me, and the emotional breakdown. I could tell because she interpreted and clarified what had happened based on my disassociated ramblings that didn't even make much sense to me. When I talked about my family, I felt like she totally got it, that is, understood what me and my brother went through and why I felt the way I did. In a matter of minutes she ascertained that my biggest source of pain over my brother's suicide was the feeling that I wasn't there for him in the last year of his life. She also commented on how I seemed especially bothered by people holding me at a distance, or just watching me and the drama of my life in a removed way instead of interacting with me as a fellow human being.

I was kind of taken aback by that because I had never really thought of it that way. I DO hate that! I probably hate that more than anything. It pretty much boils down all my frustration with the adults who I feel betrayed me as a kid because they wouldn't get involved and protect me, and the emotionally distant people in my present. She seemed to see through me so easily that it was kind of uncomfortable. I am, and probably most people would be, not totally sure how to respond to someone who really listens, asks targeted questions, and then makes some insightful comment about what I'm feeling that cuts to the point in a way I couldn't do myself. It almost made me feel like a kid with a parent that actually cared about how I felt and understood my childlike state of development with an adult perspective, which made me feel a little defensive and with mixed feelings. On the one hand, I was feeling this huge sense of (potential) relief that I may have found someone who can really help me, someone I could trust to guide me through some of this lingering childhood emotional chaos with knowledge and experience that I don't have. On the other hand, I was feeling scared that someone who can get into my head like that could do some serious rearranging, and I would just have to trust it would turn out okay. Of course, I'm not okay now, so how much worse could it get? (She reaffirmed my diagnosis of PTSD, and added another one- depression. How am I still functioning? I am so adaptable to any situation.)

Some of the books I've read talk about how growing up in an abusive home screws up your emotional development, and it can be a little discouraging because these books don't exactly tell you how to fix that. In normal childhood development, you learn things like self-regulation and self-soothing. In an abusive home, you learn coping mechanisms. When you become an adult, you still have the coping mechanisms without the self-regulation. You hold on to the coping mechanisms because its all you know, and more importantly, your brain recognizes them as what kept you alive. As she told me, your can't just stop doing something that your reptilian brain (that's where all that fight or flight stuff is) has experienced as key to your survival. So, as she said she was very goal-oriented, her goals in working with me are to teach me how to recognize when I'm disassociating so I can acknowledge and work through my feelings, and how to self-regulate my emotions, so I don't feel like I'm either numb and not feeling anything, overwhelmed with my feelings, or a combination of the two- feeling disconnected and upset but not sure why.

I came home and re-read the chapter in "Trauma and Recovery" (Judith Herman, M.D.) on child abuse:


"Repeated trauma in adult life erodes the structure of the personality already formed, but repeated trauma in childhood forms and deforms the personality. The child trapped in an abusive environment is faced with formidable tasks of adaptation. She must find a way to preserve a sense of trust in people who are untrustworthy, safety in a situation that is unsafe, control in a situation that is terrifyingly unpredictable, power in a situation of helplessness. Unable to care for or protect herself, she must compensate for the failures of adult care and protection with the only means at her disposal, an immature system of psychological defenses.

The pathological environment of childhood abuse forces the development of extraordinary capacities, both creative and destructive. It fosters the development of abnormal states of consciousness in which the ordinary relations of body and mind, reality and imagination, knowledge and memory, no longer hold. These altered states of consciousness permit the elaboration of a prodigious array of symptoms, both somatic and psychological. And these symptoms simultaneously conceal and reveal their origins; they speak in disguised language of secrets too terrible for words."

Yay! It's so good to find a good therapist! I didn't find one that fit me until...12 years after I was raped. Wow. long time.

But it was definately worth it. I've made so much progress since then. She is absolutely perfect for me.

Change for everyone is inevitable. Although it may be a challege to grow, it feels so much better afterwords. The therapist that keeps me on my toes is the one that I believe to be the best.

Anyway, I give and wish the best for you.

Thank you! I am making a lot of progress. My therapist continues to challenge me (in a good way) and is helping me move forward. My best to you as well.