I am descended from the Vikings and Genghis Khan 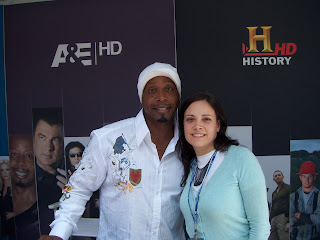 Another writing exercise from my sexual abuse book:

Write about the strengths you've developed because of the abuse. Think of what it's taken for you to survive. What are the qualities that enabled you to make it? Perseverance? Flexibility? Self-sufficiency? Write about your strengths with pride.

I've had to really think about this one, because every time I think about the qualities that have helped me survive, I also think about what they've cost me. Every strength can be a weakness, and every weakness can be a strength. People often tell me how strong I am, and part of me thinks, I don’t want to be strong, I want is to be happy and at peace with myself. I don’t want to work so hard at surviving. I'm tired of feeling like I always have to be strong, that I can't be vulnerable or let someone else be strong for me every once in a while. Of course I am self-sufficient, flexible, and persistent- I've fought hard and worked hard to survive and get to where I am, and I am proud of everything I've accomplished because I did have to work hard for it.

Somewhere along the line I developed an unwavering belief in myself, and especially when I am challenged, I rise to the occasion. I figure out what I need to do to get around obstacles, and I find a way to do it, no matter how uncomfortable it may feel. I do things that don't come naturally to me, but I find a way to make it work. (I guess that's flexibility and persistence.) When I started business school, I was terrified because I knew I'd have to do presentations, which meant public speaking. I was so anxious about public speaking I thought about quitting school before I even started. Rather than do that, though, I joined Speakeasy (the public speaking club, kind of like Toastmasters) and forced myself to go. I would stand up in front of the small group of people who came to club meetings (usually less than 10) and give my assigned practice presentations. I would shake so hard my knees knocked together, and I would sway back and forth. My mouth would go dry and I was breathing so hard I could barely get the words out. I thought I would hyperventilate and pass out. I think I almost did a couple of times. I felt humiliated, displaying my insecurities about myself in front of everyone like a little kid trying to talk to a room of pitying adults, but I kept doing it and kept trying to get better.

At the beginning of my second year of grad school, I stood in front of the entire incoming class (about 100 people) and encouraged them to join the club. People came up to me after and said they couldn't believe I ever had difficulty talking in front of people. (My response was that’s totally my point! You should join!) Now I conduct the SOX training for my company, and I'm regularly complemented on my communication skills. Probably no one but me knows how hard I worked and how much anxiety I overcame to get comfortable with public speaking. I am very proud of myself because I do know how awful I used to feel every single time I even tried to talk in class, and now public speaking is pretty easy for me. I still get nervous, but it goes away quickly. When you've survived the humiliation and terror of sexual abuse, you know that nothing you go through after that will be as difficult. When life does throw you something more difficult, the suicide of the person closest to you, and you survive that too, you really know you can get through anything. Even grad school.

When I think about my persistence and drive, I am proud of myself and all that I've accomplished, but I also think about how I got that way and the emotional pain involved. I may have been born with certain qualities or tendencies- I'm fairly smart and creative and extroverted, and I'd probably be that way no matter what had happened to me in childhood. But I learned to be driven growing up with a dad that criticized and picked on me (picked on is kind of an understatement, maybe tormented, mocked, tried to make me cry on purpose and then hit me for crying would be more descriptive), and that I was always trying to please so he would stop abusing me and maybe he would actually like and respect me if I was really good, if not love me. I had an emotionally unavailable mother that I was always trying to get the attention of, who thought the sexual abuse was my problem, so I was singlehandedly trying to and thinking I could get it to stop while managing my dad's death threats should I try to resist spending time with my sexual abuser. I had a brother I felt responsible for taking care of (since our parents were obviously of no help), and I felt like a failure when he took his life. I almost felt like I had murdered him myself. I believe in myself so much that I believe everything that happens in my life is under my control, and everything that goes wrong is my fault, even when clearly other people are involved. Abusers brainwash you into thinking that you are causing the abuse, that it’s happening because you are bad, and you grow up feeling guilty because you weren't able to be good enough to fix the situation and make the abuse stop. That guilt and way of seeing the world as your responsibility to make everything work can definitely haunt you as an adult.

Part of my motivation for succeeding in school and work has been rebellion- a "screw you" to anyone who treated me like I was worthless, part of it is the satisfaction and pride I feel when I take on a challenge and I am successful, and part of it is trying to make up for my "failure" to win my parents over, get the sexual abuse to stop, and to save my brother. Sometimes I feel that people look at me or people like me and think we have overcome our difficult childhoods and risen above it, and are on some higher plane far away from it, because obviously it hasn't held me back at all. (Maybe that’s just what I expect of myself.) In fact, the abuse has shaped me and my life in ways that are impossible to get rid of. Some of it can be seen as positive (much as I hate to think of it that way), but there's no way to know who I would be or what I would be like had it not happened. Its part of me now, maybe intensifying qualities that were already there or maybe giving me things I never would have had. It is true that I've done well for myself in my external life, but abuse damages you emotionally, internally, and external success can feel kind of hollow and unfulfilling when, despite everything you accomplish, you still feel like crap inside. It can also make you feel like a fraud and a phony and that it’s only a matter of time before everyone figures out you are just a bad, worthless person who deserved all the abuse you got. You can hide those feelings, you can suppress them, you can try to counterbalance it by being really competent and awesome in the rest of your life, but they poison the well until you work them out.

Now, not to end on a negative note, I return to the unwavering belief in myself. That belief in myself goes much deeper, and is much stronger than any of the bad messages I got growing up or any of the guilt I am still holding on to. I don’t just believe in myself because I needed to in order to survive. I like myself. I am my own person; I am unique (some have said weird, but however you characterize it I wouldn’t have it any other way); I am strong regardless of how I got that way; and I like to think that I have a lot going for me. I know I have internal challenges to overcome still, but I like challenges. I am good at them. I know I can do this, just like I knew I could get off the streets, I knew I could get into college, I knew I could become a CPA and get my dream job. There is no doubt in my mind that I will rise to the occasion emotionally just as I found my opportunities and figured out how to be successful in school and at work. If I can go from a shaking ball of terror to public speaking with ease, I can do this.

Wow! I really admire the way you conquered the fear of public speaking, as well as, all the other things you've accomplished in spite of all the pain and horror you've endured.

You really are one of the most interesting, amazing and inspiring people I've ever known.

Thank you! What a nice thing to say. I appreciate that. :)