"Come on, Doctor, show me the stars!" 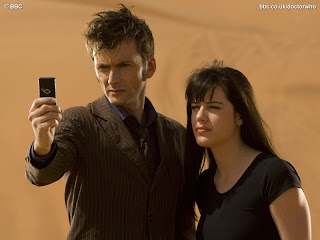 I had the BEST weekend. Last night I had so much fun going to the X show, and tonight I played hockey and it felt GREAT. It had been forever since I'd been on the ice. It's actually been 10 days, which is really a lot for me. I don't think I've had that long of a break from hockey this whole year. I was a little worried I'd would have forgotten how to skate or something, but I felt so good out there. And I was fast and furious! I was going all over the place. Granted, we had way more people than the other team, but I was chasing some of them down and back-checking my heart out. I loved playing soccer in high school, but hockey is the absolute funnest to play because you can get going quickly, then change directions, go sideways (that always blows my mind when I do it too. I am literally thinking, "I can't believe I'm doing this!" as I'm doing it.), backwards, and it's the best if you feel like you're on the edge of losing control and wiping out spectacularly. If I don't feel slightly out of control I figure I'm skating badly or not hard enough. I didn't just make that up- my instructor said if you feel too comfortable on your skates you're probably not doing it right. Edges. It's all about edges. and bending your knees. and looking up.

Skating by itself is a good time, but then you give everyone sticks and the puck is flying around and you're crashing into people and trying not to fall down and watching for your teammates and keeping an eye on everyone on the other team so they don't sneak around you- seriously, what could be more fun? I'll tell you- NOTHING. The X show was close.

All my teams are underdogs this season, which is kind of hard because we are all competitive. You probably have to be to get into hockey. And there's the pride thing. But we have a lot of fun regardless. My fabulous Canadian friend who just had twins was back playing for the first time tonight. We talked Canadian to her to pump her up, i.e. "Hey you hoser, take off, ay!" (I miss Bob and Doug.) She got an assist, so I'm sure it helped. Canada kicks ass! I screamed myself hoarse on the bench- "Go Canada, go Michigan, go Rock Star, go Mad Dog, go Zam!!!" (We all have nicknames. I'm ketchup because I wear # 57.) When we scored our one and only goal, our bench went so crazy that the scorekeeper and the referees all looked at us in wonderment, and the other team slunk over to the face-off circle muttering, "Shake it off, we'll get it back." like we had just gone ahead, even though they'd already scored on us 3 times. That's the best thing you can do on a team that doesn't win a lot- celebrate everything you can. Everyone said it was a really fun game even though we lost. I was just so ecstatic to be back on the ice I was beaming.

As if that wasn't enough, new episodes of Doctor Who started on Saturday! I watched "Waters of Mars" today, and next week The Master is back! (The Master is a rogue Time Lord, the Doctor's nemesis.) The Doctor is currently companion-less. I was really hoping for him to take Lady Christina de Souza (in the picture) from a one-off a while ago, because she is basically ME in Doctor Who form. Despite spelling our name wrong, if I was a character on Doctor Who I would totally be her. She only lasted one episode though. The Doctor ditched her. He is soooo unreliable. On the bright side, I guess I have my next costume!
Posted by Tealrat at 10:17 PM

Email ThisBlogThis!Share to TwitterShare to FacebookShare to Pinterest
Labels: hockey, movies and TV

I can't wait to see the new episodes! I love the Doctor! And I enjoy watching the episodes with Master.

The season premiere was great! The Doctor is a little edger this season I think. The Master looks evil as ever, at least in the preview. :)

It's so great to hear that you're feeling better and back on the ice!

Saw a promo on TV for the annual New Year's Day NHL game played out doors. This year it's at Fenway in Boston and airs on NBC New Year's Day. Not sure which teams.

Am looking forward to watching it!

I don't watch football because I'd rather see REAL athletes....
like NHL players!