"I can see through time!" -Lisa Simpson 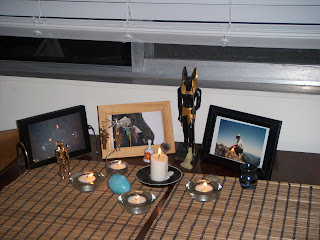 Happy 32nd birthday. I'm guessing birthdays don't have the same significance where you are, but I thought of you today. I tried to think happy thoughts, but instead I kept feeling a heaviness in my heart, or like a hook was dug into it and pulling it down. I can't really imagine you as a 32 year old. I guess I can, but it seems odd. I don't think you were alive when "Titanic" came out, but in that movie the main character dies when she's an old woman and goes back to herself as a young woman. I can't imagine that you'd want to go back to being younger, since you were only 19 when you died. I actually think of you as slightly older, like about 24. Maybe that means I imagine you aging slower in the afterlife, or maybe I think of myself as younger than I really am. That would make me 30 (in my mind), although today, your birthday, marks the beginning of our annual tradition of you teasing me that you're only 5 years younger than me until my birthday, when I go back to being 6 years older. So enjoy it for the next 20 days.

I was going to spend tonight eating your favorite food (pickles) and watching your favorite show (The Simpsons) until midnight, but I am so exhausted I don't think I'll make it. I did set up a shrine of sorts, and I'm burning candles for you (above). The candles are comforting to me, and you seem to like them. I know you weren't alive for the advent of online social networking (It's a place for friends!) but one of things going around Facebook is to summarize the year in one word. I think I'd have to say exhausting. I was overwhelmed at work all year, and I had insomnia for the last half of the year. It finally went away a couple days before Christmas. I don't know why, but I'm not complaining. I was dependent of over-the-counter sleeping pills for a while there. If I could use a second word to describe the year, it would be hockey. At the beginning of the year I was playing in one league, now I'm playing in three. I went to my first tournament last January, and have played in two more during the year. I think you would be proud of me. Not because I'm particularly good. You never cared much about competition or what anyone else thought. I think you'd be proud of me because I'm having so much fun doing it.

I feel like I can write to you and you are listening. In the years immediately after your death, the distance I felt from you was the most painful. I felt like you had totally vanished, and the emptiness inside me was sharp and cold. A lot of me felt dead too. Now I think it was just frozen, but frozen hard. Like frostbite, it hurts like hell when it thaws. So I stayed frozen for a long time. Now there's just a lot of grief. It feels like oceans inside me, like I could keep crying for the rest of my life and never run out of tears for you. In some ways the grief is more real than it was 10 years ago. I have to believe that if you knew how deeply those of us who love you really felt and how much agony your death would cause us, you may have made a different choice. But maybe I'm wrong about that. I've struggled with depression, and even with suicidal thoughts, my whole life. I've never seriously come close to ending my life, though. You know how stubborn and determined I am. There are times in life where I was probably surviving purely on anger, driven to not let "them" win, whether "they" were our parents, the foster care system, the police, the teachers at school who let me drop out, the universe- it didn't matter. I have grown up a little since then and don't need adversaries in my life to motivate me the way I did before. Thankfully my inferiority complex and me against the world attitude has calmed down considerably. Plus I can channel my competitiveness into hockey. But maybe that attitude was what I needed to get through it all.

You were never like that. You were the easygoing one. The last year of your life, though, you were also so depressed I couldn't even talk to you. You were so far away; it felt like you were slipping through my fingers. I didn't know what to do. I tried to talk to you; I tried to bring up my own struggles in the hopes you would share your current ones with me. I was actually pretty depressed at the time too. I had to get a hardship waiver to drop winter quarter because I had gotten so depressed. So I was struggling. Still, I don't think I ever got close to ending it. In other words, I don't think I've ever experienced the kind of depression you must have been going through when you made that decision. Now suicide seems even more unfathomable to me than it did before. Knowing what it does to the survivors, knowing the pain of being left behind is the greatest pain imaginable, greater than what even could be imagined, greater than what the abuse did to me, much greater than any depression I've experienced. Even though I loved you more than anything and would have given my life for you, and despite all the closeness we shared and how we supported and helped each other through our childhoods, I don't think I am even capable of understanding where you were in your head and heart when you took your life. I was even angry at myself for a while that I hadn't killed myself first so maybe you would have changed your mind, but that probably would have made your suicide even more likely. As much as we had in common and as much as we understood each other, that's a place I couldn't go with you.

I remember when you were a baby and how badly I wanted to hold you and tickle your chin and make you smile, all the way through our dad's cousin's funeral when you were about 9, and all the crying made you uncomfortable and sad, so I put my arm around you and talked softly to you, and you looked into my face the whole time so you didn't have to look at the mourners. I always knew when you needed comforting, and you always came to me when you did. I remember visiting you in Eugene, Oregon during your one semester at college, and buying you pizza from your favorite restaurant because you had no money. We sat on the floor of your ridiculous attic apartment, ridiculous because we couldn't even stand up straight without hitting our head on the roof (even me), and talked all night, periodically calling the local radio station and asking them to play the full version of "in-a-gadda-da-vida". (They never did. I still love that episode of "The Simpsons" where Bart sneaks it into the hymnal and they sing it at church. "Margie, do you remember when we used to make out to this hymn?") I was worried about you. I knew you were lonely, and even then, more than a year before your death, I could tell you were starting to lose touch. You were drifting.

I tried so hard to take care of you, which is why I felt like such a failure when you died. Really, you were the one who took care of me. I don't think I would have survived our family if you hadn't been there for me. I made you smile, and you made me laugh. You had such a dry sense of humor. I was never alone because of you. After your funeral, your friend Leonard gave us a card with a quote from Hamlet- "Alas, poor Yorick! I knew him, Horatio, a fellow of infinite jest, of most excellent fancy; he hath borne me on his back a thousand times..." It describes you so well. The depressed court jester. You carried me on your back, and I was the strong one. You are still the best person I have ever known.

For a long time after you died, I didn't dream about you at all, and I wonder if you were so far away I would never be close to you again. Then I had dreams where I was trying to save you, but you were already dead. Or dreams where you were mute, and wouldn't even look at me. I would try to help you and you'd refuse to respond. In one, you sat in a house that was filling with water, and wouldn't swim. In another, I was dragging you around, trying to get you interested in things I thought you'd like, but you ended up walking away from me and disappearing in the distance. After many years I finally had dreams where you seemed back to normal and interacted with me. Sometimes I have dreams where I'm just sitting and talking to you, and I imagine you are telling me all the secrets of the universe, but when I wake up I can't remember anything we talked about. At least you smile in those dreams. I feel a little sad when I wake up and I know you're gone, but at least you visit me sometimes. I have no doubt that you are watching over me, and share in my joys and my sorrows. I know you didn't mean to hurt me with what you did, and wherever you are, you are not suffering like you did in life. So that's something. You know how intensely I miss you though. I will always feel that the world would be a better place if you were here, but you will always be in my heart. So, again, happy birthday my dear, sweet brother.

~Kristina
Posted by Tealrat at 8:56 PM

Your blog keeps getting better and better! Your older articles are not as good as newer ones you have a lot more creativity and originality now keep it up!

A Parable of Immortality
by Henry Van Dyke

I am standing upon the seashore.
A ship at my side spreads her white sails to the morning breeze
and starts for the blue ocean.

She is an object of beauty and strength, and I stand and watch until at last she hangs
like a speck of white cloud
just where the sea and sky come down to mingle with each other.

Then someone at my side says,
"There she goes!"

She is just as large in mast and hull and spar as she was when she left my side and just as able to bear her load of living freight
to the place of destination.

Her diminished size is in me,
not in her.

And just at the moment
when someone at my side says,

there are other eyes watching her coming . . .
and other voices ready to take up the glad shout . . .

INTIMATIONS OF IMMORTALITY
By William Wordsworth

Our birth is but a sleep and a forgetting:

The Soul that rises with us,
our life's star,

Hath had elsewhere its setting,
And cometh from afar:

Not in entire forgetfulness,
And not in utter nakedness,
But trailing clouds of glory do we come...

From God, who is our home.