There is radar in my heart 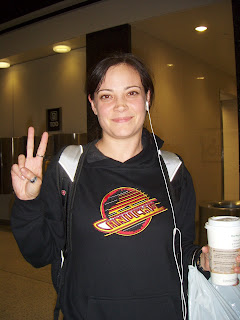 It feels a little strange that a couple weeks ago I was in such turmoil, and now, days before Christmas, I feel so calm. Part of it is that I let myself feel everything I was feeling when my nightmares brought up suspicions and disturbing memories from when I was young. Since I am now willing to allow myself to feel what I am feeling, and have the support and faith of my therapist and my BFF in Seattle, I was able to go with it when doubts crept into my mind, questions from as far back as I can remember that I was never able to face before.

There's been a shift in me since the turmoil began. I now believe myself. I believe what I remember; I trust my recollection of my family, the way my parents acted, the way I felt at night and around my dad. I don't doubt myself anymore, or feel that it matters if other people do. I was there. I know more about it than anyone else could. It was a blow to lose my brother as the only witness I had to how bad our family had been. But I am a witness. My brother never doubted me and I have struggled to internalize his faith in me the way I did with my parents' lack of belief in me. I know that deep down there is more in my memory that I don't have access to right now. It is a little disconcerting to know things happened to you that are hidden either because you were too young or they were too traumatic for you to bear. I do know something happened. I may remember more or I may not. But by bringing my suspicions into my conscious mind, the doors are open to my own perceptions.

It takes a lot of effort to suppress your own memories and thoughts. It has also made me feel fragmented. I've taken pieces of myself and pushed them away, separated and isolated them. Now, it seems almost magically, my past is more clear. My life is more coherent. Most of all, the way my family acted makes much more sense to me. I felt like my brain was a cell phone that wasn't getting a signal but keeps searching, endlessly, wearing out the battery and getting nowhere. Something was missing before, and I just couldn't reconcile how I felt, what had happened, and how everyone in my family had acted. I had that Wonderland feeling that I was in a world that was off, nonsensical, and I was lost trying to understand it. The thing is, I haven't really figured anything out or came to any firm conclusions. I suspect my dad sexually abused me when I was very young, probably before my brother was born (when I was six). I don't know it for sure. But it's something I've suspected at least since I was in middle school, I just couldn't admit to myself that he could have done something so depraved. Just acknowledging that possibility makes my family, both my parents, seem even more dysfunctional and emotionally destructive than they already did. But that also makes the feelings I have about them and my childhood, the terror, the severity of my PTSD symptoms (especially the disassociating) and my brother's suicide make more sense. Whatever was off about my understanding of it is not off anymore.

Maybe it's just acknowledging to myself how messed up my parents were and what they were capable of that allows me let go of the guilt I felt over thinking horrible things about them, and wanting to blame myself so I didn't have to blame them. Amazingly, I'm not feeling guilt over my brother's death either. Now I see how helpless we both were, how powerless we were as children to deal with how our parents treated us. I see how insane and lacking in appropriate boundaries their behavior was, and all the doubts about my own sanity float away. I remember how crazy it was in our house, how unpredictable, how irrational. That was my parents doing, not my brother or I. I remember how little parenting we got, how often I felt like I had to be the adult and take care of me and my brother because our parents were acting like children, to each other and to us. I remember. I remember plenty.

My mind is open now and I am at peace with myself. I did the best I could have done. I feel kind of weird about seeing my childhood self as a separate part of me, my "inner child", but some part of me needed to be acknowledged, comforted, understood, believed, and accepted for living through all the things I lived through. All of it. That part of me now feels at peace. I knew I needed to do that for myself- that the approval and faith I really needed was my own. My present to myself.

It's really wonderful to hear that you're experiencing such positive progress after all the hell and hard work you've gone through to reach this point!

I can stop bitching out the Universe (for now anyway) about all the crap being heaped on you.

...."...a memoir about the journey of a young woman who discovers herself in the stories of other women who share her same name and coincidentally share experiences of violence and abuse that plagued her own childhood. Through her physical journey across the country she is thrust into her own emotional journey. She embraces each woman she meets, is strengthened by their connections, confronts the father that molested her. Angela Shelton is an award-winning actress and filmmaker. She made her directorial debut with her documentary Searching for Angela Shelton in which she drove around the country meeting other women named Angela Shelton. She found that 70 percent had been victims of sexual assault or domestic violence. This surprising journey led Angela to confront her own abusive past."

This book had a huge impact on me especially the part where she confronts her dad about sexually abusing her.

And then there's the part about what she does when she learns her dad has remarried to a woman with two small kids! Wow!