Now I can wake up and face the day 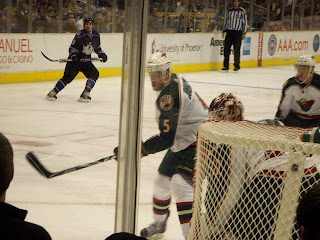 I'm just going to write about hockey and TV, because it's Monday and I have therapy tomorrow. I can't be deep and meaningful every day.

I went to the Kings game tonight against the Minnesota Wild. I have kind of a soft spot for the Wild because my mom is from Minnesota, but not tonight. The Wild won after the Kings tied it in the 3rd, then the Wild scored 12 seconds later. I developed a strong dislike of Cal Clutterbuck.

I came home tonight and my DVR had recorded not just the PBS Newshour, but had also picked up reruns of "How I Met Your Mother", "Lewis Black's Root of All Evil" and 3 episodes of "True Blood". Lewis Black was pitting the NRA vs PETA. That was a hard one. The show debates which is more evil, using comedians so it comes out pretty funny most of the time. I used to support PETA, back before they abandoned their mission of stopping the objectification of animals to objectify women and whore for publicity. I suppose the fact that I used to like them makes me hate what they've become that much more. But the NRA, well, as someone who lost their brother to a gunshot wound I just can't hang with the NRA in any way. Plus death is a little more serious than pathetic sexist jerks. The comedian arguing for the NRA as the root of all evil had a pretty lame "Ripple of Evil", but that was probably because the ripple is supposed to go into a fantastic worst case scenario if the offending person/organization/whatever continues on their evil path, and how do you come up with a worse worst case scenario than we already have? 30,000 people are killed annually in the US by guns. Make that more horrific. So the NRA won.

So on the topic of hockey and reruns, I just have to share this quote from "How I Met Your Mother". It is the greatest sitcom quote of all time (excluding the first 10 years of "The Simpsons"). Just to set it up- this was said by Robin, who was at a Canucks-Rangers game at Madison Square Garden. She was also wearing a Canucks jersey- "Damn it Hordichuk, you miss another gimme like that I'm gonna come down there and put a slapper right up your beer hole. Come on!"

That is beautiful.
Posted by Tealrat at 11:15 PM

Email ThisBlogThis!Share to TwitterShare to FacebookShare to Pinterest
Labels: hockey, movies and TV

Saw the photos of this on CNN...

BUFFALO, NY -- After an adventurous trip the Pittsburgh Penguins have finally reached their hotel in Buffalo, NY – a trip which included several run-ins with Mother Nature – most notably the sight of the Penguins coaching and support staff pushing a team bus after it became stuck on a slick Buffalo street......

TO READ THE REST OF THE ARTICLE AND SEE THE PHOTOS go to: