Make sure you do it wise 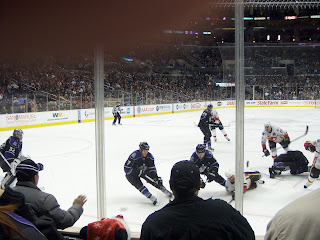 I just got back from the Kings playing the Calgary Flames. We were so close it was kind of insane, especially all the action in the corner and against the boards. I am so proud of the Kings! They kept the energy up the whole game. Last time the Flames were here, Iginla got a hat trick, and I was sitting in the nosebleeds. This time, the Kings won and I could see their facial expressions. Wayne Simmonds had a priceless moment where he was deking around someone and gave him this mischievous look. The Kings looked like they were really having fun.

I get a little starstruck at these games. It feels pretty exciting to be so close to someone like Iginla, Phaneuf, or even Kiprusoff (I'm especially fascinated with the goalies for some reason), players I've watched on TV and heard so much about. I'm on a first name basis with the Kings, at least I think I am, but when I got to talk to some of them at a Meet the Kings event, I felt pretty giddy. They all seemed nice and like normal guys. Then I see them play and it blows me away. I still feel as amazed at hockey players and what they can do with a stick and a puck, flying down the ice on two thin little blades as I did when I first discovered the game. Watching a game so close to the glass, I can't even compare what I do when I'm "playing hockey" to what they do.

Driving home, I thought about my brother and felt sad, for the 100 billionth time and I'm sure there will be 100 billion more times, that I can't share these things with him. I hope he can know what I'm writing in the afterlife, and know how much I wish I could have gone to hockey games with him, and he could have seen me play, and we could have laughed and joked about it the way we did about everything. A Green Day song came on the radio just as I was thinking this. Something about that band makes me think of my brother, not because he ever listened to them, but because when I hear them I remember times I was listening to them and missing my brother. By some coincidence I started listening to Green Day shortly after Jeff died. His memory feels so real then, his strange sense of humor and subtle mischievousness. His way of taking the world so seriously, and at the same time not seriously at all. It's a game, a painful, painful game, but a fun game too.
Posted by Tealrat at 11:47 PM

It's so great that you've gotten to see pro-hockey live and in person because TV can't fully capture how incredible those guys are and how they make it look so easy. And very cool that you've also met some of them!!

I know! I think it's funny that my hockey fandom has benefited so much from moving to L.A. Who would have thought I'd be three times the hockey fan by moving south?