Since December is such a difficult month for me, I decided to blog every day of December. It started accidentally- I posted on December 1, then December 2. I thought, why not post every day this month and see if it helps me get through the month. I often find it hard to write. I think of things I want to write about every day. Sometimes I take notes, or I just turn things around in my mind until they become more developed. I did this when I was writing poetry. Usually it started with a school assignment which I would let roll around in my mind for a couple days until I had an idea, then a phrase or a line I could build on. It's the building that I put off. It can take me 3 or 4 hours to write a blog post, and I keep thinking I don't have time to finish a post so I don't get started. I hate not finishing things. I hate that feeling that I'm putting time into something that might not get done. It seems like a waste of time if I don't end up with something accomplished afterward.

I guess I am impatient that way. Longer projects can be frustrating, because I can't see the end. If I can't imagine the end, it's hard to get started. I guess it's not totally impatience, because it took me seven years to get my CPA license, and involved multiple, intensive steps- getting my MBA, passing the four sections of the CPA exam, then the ethics exam, get a job in audit and then auditing for two years, and submitting my application (much easier in Washington than in California). That was a concrete goal, though. I could measure success in a very black and white way, either I have my license or I keep trying. I knew the steps I needed to take. It was all very clear. It wasn't easy, by any stretch of the imagination. But it was clear. Kind of like working in accounting. The right answers are usually unambiguous.

Black and white thinking is a symptom/trait/possible outcome of growing up in an abusive, alcoholic, or otherwise dysfunctional family. I don't totally understand why, but I think part of it is that your family life was so chaotic, and cause and effect gets so messed up in your mind. You're told that you're causing the abuse, but then you can't make it stop. You believe your parents love you, but then they treat you like they don't. It can really make you long for straightforward situations, obvious answers, structure and predictability. It feels so good when something works the way it should. It feels good to understand something, to know the right answer. It feels good to try to do something, and be successful at it.

I can tolerate a certain amount of greyness, but I feel really satisfied to reach some black and white conclusion. Like, we debated this point, but we came to a decision and that's final. I may have disagreed, but I had my say and now the debate is over and we're moving forward. We played this game, and some of the calls (or lack thereof) were crap, but we reached a final score. I was rooting for one team, but I liked some players on the other team, but regardless, one team won and the other one lost and now we're done. I guess you could say I am a fan of the shoot-out after 5 minutes of overtime when there's a tie in the NHL. I prefer that to leaving the game as a tie. Ties are so wishy-washy.

Unfortunately the Kings lost in the shoot-out today. It was a total rollercoaster of a game- the Kings were so on top of things in the first period and had the St. Louis Blues back on their heels, but the second period they were not so great. Then they tied up the game with 34 seconds left. That was exciting, especially since I was there to see it. Too bad the shoot-out was so one-sided. 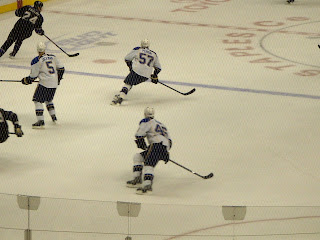 My teams are the Kings and the Canucks, and I despise the NY Rangers. That much is definite. But I at least have an opinion on most of the teams in the NHL. I didn't used to like the Blues because Brett Hull annoyed me. Then I found a player I did like on the Blues- David Perron. I initially liked him because he's #57, my number. But besides being #57 (hey, there are only 3 #57's currently in the NHL, and I love my number), he's really good. If you don't believe me, check out this goal. 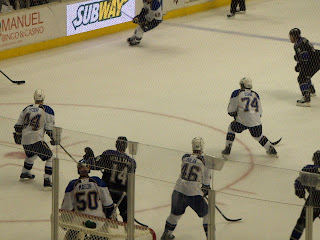 I also like TJ Oshie (#74) on the Blues because, wait for it, he's from Mt. Vernon, WA. Mt. Vernon is only slightly bigger than my hometown, Pullman, WA (population 26,232 vs. 24,675). For someone to make it into the NHL from Mt. Vernon might be even more amazing than Keith Ballard making it into the NHL from my mom's hometown, Baudette, MN (population 1,104, but Baudette is in Minnesota and hockey is a religion there, as opposed to Washington State, where hockey is a religion to only a select few, like me. But I moved.) Oshie is very good as well. I also like how the Blues have a nice balance of older, experienced players (like Paul Kariya and Keith Tkachuk) and the young, up-and-coming. Ergo, I like the Blues this season, except when they are playing the Kings or the Canucks. I also like any team who's playing the Rangers, at the time they are playing them. Hey, you think my team affections are based on silly reasoning? Yours is just as random. Go ahead and explain the scientific and logic-based reasoning for why you like teams. Yeah, that's what I thought.

I also love Keith Ballard, and his team the Florida Panthers. I even started the Keith Ballard fanpage on Facebook. Keith is having a worse November/December than me. Maybe he should blog it out.

Oh, so back to the point of this post, which is that I am going to post every day this month. It's a totally doable, concrete goal. It also is pushing me to just write, and not worry so much about time and writing something all brilliant and insightful. I think it will be good for me to just write this month.
Posted by Tealrat at 11:14 PM